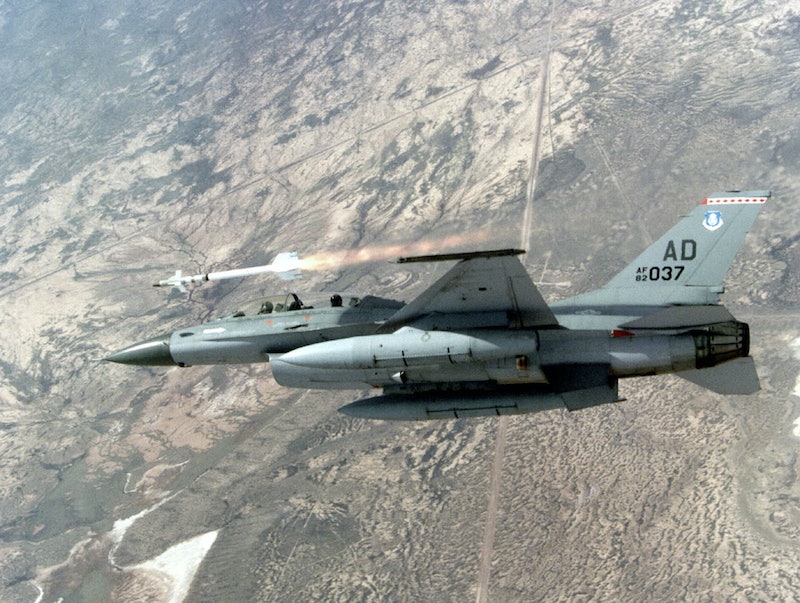 Late Monday night, the U.S. launched its first airstrikes in Syria as part of its multifaceted campaign to destroy ISIS. Before Monday's attacks, airstrikes had been limited to Iraq, but the terrorist group's unwavering threat prompted President Obama to authorize the international coalition to expand its aim. According to several top U.S. officials, the airstrikes in Syria have already seen success, and not just in wounding ISIS' operations.

The U.S. partnered with several Arab nations — Saudi Arabia, the United Arab Emirates, Jordan, Bahrain, and Qatar — to carry out the airstrike campaign in Syria. According to the Department of Defense, 14 airstrikes were launched using a combination of remotely controlled aircraft, fighter jets dropping precision-guided bombs, and ships firing cruise missiles.

There were about 20 targets in the attack, all either in or around the city of Raqqa. Raqqa is known to be ISIS' Syrian headquarters. The terror group has seized control of the city and established training centers, weapons warehouses, and shelter for militants. By targeting these areas, the airstrikes were meant to deal an "initial, definitive blow" to ISIS' operations, crippling their command station and hindering their ability to supply and train fighters.

So were the airstrikes actually successful? Judging by initial statements and reports, the answer is yes — and not just in hitting ISIS.

A full assessment of the attacks has yet to be released, but the Department of Defense has already released a statement on their initial success:

The Pentagon echoed this report when Pentagon Press Secretary John Kirby told Good Morning America that "we were successful in hitting what we were aiming at," saying:

We took out command-and-control facilities, supply depots, some training areas, some vehicles and trucks, that kind of thing. Mainly, what we were going after was this group's ability to sustain itself, to resource itself and to, frankly, command and control and lead their forces

Another Priority Target Was Also Hit

The focus of the campaign may largely be on ISIS, but the U.S. also included Al Qaeda's Syrian cell, Nusra Front, and shadowy Al Qaeda-linked terror group Khorasan in its crosshairs.

Besides damaging much of ISIS' central control station in Raqqa, the airstrikes also hit Khorasan's camp in Syria, where they had been developing explosive devices to use in attacks on the U.S. and the West. According to Army Lt. Gen. William Mayville, Khorasan was "nearing the execution phase" of its attacks, which would have likely targeted U.S. aviation.

U.S. military officials and analysts will monitor ISIS to see how they react to the first round of strikes and see where they move next. A second round of attacks can be planned based on these movements. After Monday night's attacks, President Obama said in a press conference, "We're going to do what is necessary to take the fight to this terrorist group."

However, the U.S. should refrain from letting its guard down after this initial success because the possibility of an ISIS retaliation is likely. Last month, ISIS retaliated against the airstrikes in Iraq by beheading James Foley, just the first in a series of several executions. Regardless of the success we saw in Syria, one thing we must never do is underestimate the brutality and devotion of ISIS.

More like this
What To Know About Martin Bashir After Watching 'The Crown'
By Bustle UK
Read Dan Levy's Heartbreaking Message After The Club Q Shooting
By Stephanie Topacio Long
Iran Has Issued A Death Sentence Over Mahsa Amini Protests
By Catharina Cheung, Darshita Goyal and Maxine Harrison
Footballer Jake Daniels Shared His Thoughts On A World Cup Boycott
By Sam Ramsden
Get Even More From Bustle — Sign Up For The Newsletter