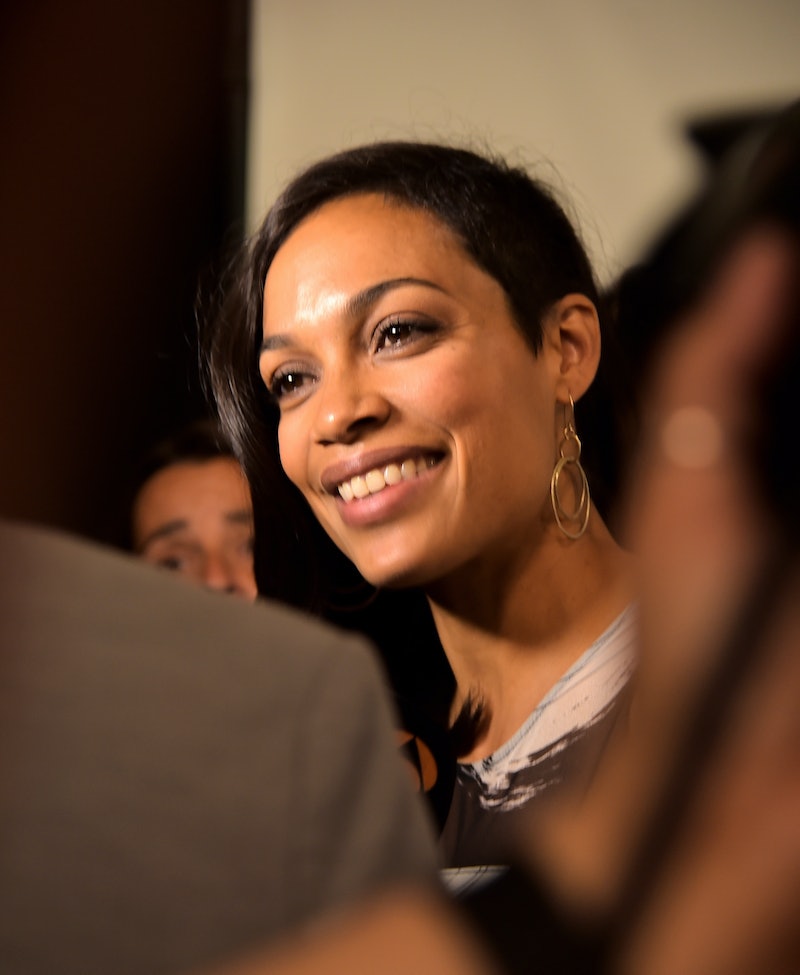 True Detective news makes me go "alright, alright, alright" in honor of McConaughey who, sadly, will not be reprising his role as beloved stranger in a strange land, Rust Cohle. The new leads are Colin Farrell and Vince Vaughn, whose casting on the project was just announced today. Some may doubt Vaughn's ability in the role because he's known for his goofy, comedic roles. But so was McConaughey, taking off his shirt in every romcom possible before he transformed himself as an impressive dramatic actor.

While any True Detective news is exciting news, I'm getting a bit peeved that the showrunners haven't yet announced who'll be playing the female lead in the second season. They're looking at seven great actors, among them Elisabeth Moss and Brit Marling, but after hearing that Vaughn and Farrell are the male leads, I am 100 percent on board with Rosario Dawson being cast as the female lead.

Why? As I initially mentioned, Dawson has proven her snuff as seasoned in dark roles (Sin City, for one). But seeing that the two male leads are, well, white guys, there's a need more than ever for diversity on the show, and the women who are vying for the role of Ani Bezzideres, a "tough, no-nonsense Monterey sheriff whose troubled upbringing has driven her to gambling and alcohol," are all white actors except for Dawson. Further, the first season of the HBO series, great as it was, was not particularly kind (to put it lightly) to its female characters. Many reviews hailed the show as the best on television, But as Emily Nussbaum of the New Yorker noted, "while the male detectives of true Detective are avenging women and children, and bro-bonding over “crazy pussy,” every live woman they meet is paper-thin. Wives and sluts and daughters—none with any interior life." And in a hilarious but harsh reflection of Marty's wife: "Maggie, the only prominent female character on the show—is an utter nothing-burger." Ouch.

All the more reason the role should go to Dawson; I've got a pretty strong inkling that Dawson would refuse to play the role as anything but complex and layered. The show desperately needs a three-dimensional female character to make up for the unfortunate dichotomy of the first season, which was skewed to praise anti-heroes Cohle and Hart. Their chemistry was mesmerizing to watch, but it was disappointing to see the vilification of all the show's women, faulting them for the mens' shortcomings. It's not altogether un-similar to the hatred for Anna Gunn's Skyler White on Breaking Bad, when she was truly one of the (more) moral characters on the show.

True Detective needs Rosario Dawson. And because the female lead is one of the detectives on the show, she'd provide an awesome dynamic between fellow cop Farrell and with criminal Vaughn. I know so because she's a scene-stealer in everything she does. Even if True Detective casts Dawson out of a feeling of obligation to offer some diversity, a guilt-fueled casting would be better than nothing. The bottom line is we need to see the show honor female characters as well as characters of color, which is why Dawson needs to share the screen with Farrell and Vaughn. And, hopefully, the show will have more complex and dimensional women in its second season—we'll wait and see who else is cast.