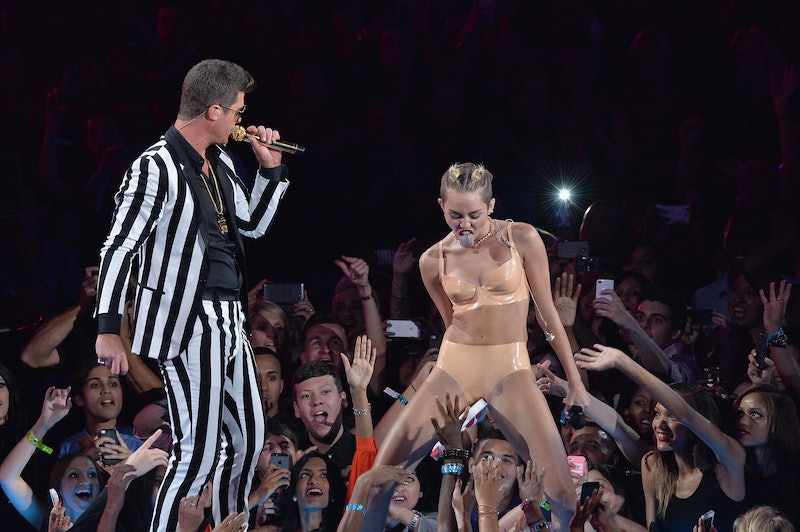 It started off promising. For Miley Cyrus's 2013 VMA performance with Robin Thicke, SNL all-star Vanessa Bayer introduced the act by making fun of everyone's least favorite twerker, and it was pretty cool, y'all! Even Shailene Woodley looked like she was having a good time, which is more than rare. But when Miley came on stage at the Barclay's Center in Brooklyn, you could almost hear the collective recoil. In a Madonna-meets-Gaga unitard, Miley recreated her controversial "We Can't Stop" video onstage with women in bear costumes that had huge asses. Then things got weird.

The camera panned to the audience and Rihanna and her crew were not amused. In fact, not many people in the crowd seemed into Miley's performance. Was her tongue taking up too much real estate on the Jumbotron? Had her twerking finally outstayed its welcome?

And just when things couldn't have seemed more played, Robin Thicke sashayed on stage and he and Miley performed "Blurred Lines" together. Well, "perform" is generous. It's more like the sang-talked out of key while Miley did her best to simulate a sex act at every turn. Did we mention she stripped down from her unitard into a flesh-tone bikini? Who strips down from a leotard? How was that even possible? Anyway, when she wasn't thrusting her crotch into the pit, she was bent over in front of Thicke's crotch.

You guys, there was way too much crotch-action on that stage. Way too much.

By the time something called Two Chainz made his way onto the stage, our eyes and ears had walked off our face in protest. They were not having it. And if that's how we reacted, we can't even begin to image how Rihanna's senses faired after that assault. It was pretty painful, and not in a good way.

Don't know about you, but that performance left us needing a palate cleanser, y'all. So, here. Watch Bayer make fun of Miley in one of her most classic SNL skits to feel better about, well, everything.

More like this
Selena + Chef Season 4 Was Filmed At Hannah Montana's Old Malibu House
By Jake Viswanath
Lauv Is No Stranger To Taylor Swift, Drake, Ed Sheeran, & Fame
By Alyssa Lapid
Beyoncé Sent Flowers To “Masterpiece Genius” Madonna After The “BREAK MY SOUL” Remix
By Grace Wehniainen
Who Is Camila Cabello Dating? She's Getting Cozy With Lox Club CEO Austin Kevitch
By Radhika Menon
Get Even More From Bustle — Sign Up For The Newsletter