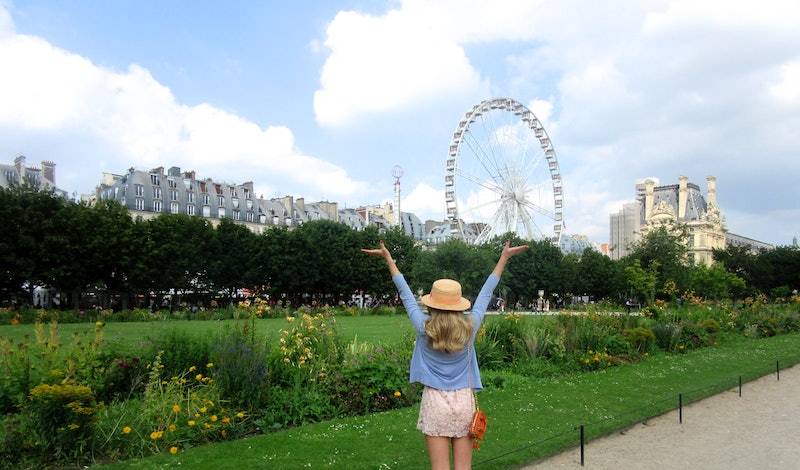 I don't care what anyone says — no part of growing up and finding yourself is easy. Between who you are, your career path, and your personal style, that's a lot of things to not eff up. Deciding how you want to dress may sound frivolous, but it's more than just clothing. Your style is the image you want to present to the world, who you want to be, what about yourself you want to reflect. It's why a stylist is a legit job; even celebrities have a tough time fashioning their image. But not all of us can afford Rachel Zoe on speed-dial, so looking to the stars for inspiration is the best we can do. And when it comes to fashion, not having a style icon is probably more pretentious than having one is. But I think after turning 25 (you know, with all the wisdom and general maturity I've acquired, wink wink), I've finally grasped what my own, personal style is. Although, that's not to say I didn't have some help along the way...

No. I don't mean Emma Watson. When I was 13, the school girl look was totally in, and Hermione was my style icon. I rocked those knee socks and plaid skirts (and maybe a witch's hat, from the privacy of my bedroom).

But then I started high school, and it was time to trade in my broomstick for a slightly trendier image.

I was a high schooler. I was on dance team. I needed to look cool, and who was cooler than Britney? Although, I don't think I actually wanted her style as much as I wanted her abs in the "I'm A Slave 4 U" music video. I even pierced my belly-button to emulate the look, but sadly, I never got to wear the dangling diamonds, because I realized after about a week I looked pretty darn tacky and took out my stud immediately. I mean, I was starting college in three months. Grow up, Sienna.

I needed a mature look for college, and Rachel was the epitome of a put-together woman. She lived in New York City, she had perfect hair, and she worked at Bloomingdales. I mean, seriously. But I quickly realized that I was 18, not 30. And this was not the '90s. Bootleg jeans are out. Quick, go buy some skinnies.

Alright, I'm trading up to a Victoria's Secret angel as my style icon. Miranda is classic, sophisticated, yet still modern. Except that it's really getting difficult walking around everywhere in heels. My feet hurt. Blazers seem a little dressed up for class, no? Everyone else is wearing pajamas. That girl is still wearing the same outfit she had on last night. And blowing out my hair every day is quite a task in my small, dorm bathroom. I preferred wearing it wavy and washing it once a week. I'm over it, this is too polished for me.

I just graduated. I moved to New York City. I'm working at my first fashion magazine. I have a hipster boyfriend. I'm edgy. I can rock this. The boots are pretty cute, and I've always loved wearing hats, but all the studded clothing/accessories are starting to overwhelm me. Really, I scare myself sometimes. I'm actually really feminine. I miss pastels, I miss flirty skirts. And don't even get me started on leather jackets. Sometimes I can position myself to look cool, like in the photo above.

But then in reality, I'm 5'3" and pretty slender. I can't find a leather jacket that fits me. I'm literally swimming in my clothing.

My hand is hidden somewhere in that sleeve.

This is the one. She's French, she's feminine, but she's still a little undone. And this style is actually working for me. Except, she's really not photographed that much. I've run out of pictures for inspiration. Would Clemence wear this? I'm not sure. I can't even get dressed anymore. Screw it.

So I gave up. I stopped looking to celebrities for inspiration and just wore what I wanted. It was liberating — to a point. But then I got a little bored. I missed the excitement of the constant reinvention. Isn't that the point of fashion, anyway? It's just an adult version of playing dress up, a giant, life-sized fitting room where you try different looks on until one feels comfortable. Maybe I was just looking to the wrong things for inspiration.

Instead of emulating celebrities, we should all draw from experiences. We are who we are, we like what we like because of what we've lived, seen, and experimented with along the way. So when someone asks me who inspires my style, I think I'll say it's not a question of who, but of what. It's the summer I spent in Paris, the country roads by my parent's house, my favorite F. Scott Fitzgerald novel, old jazz and blues music, that Andrew Bird concert in Riverside Church, my ridiculous sweet tooth, and maybe a bit of Miranda, Alexa, Clemence, and even Rachel.

But given that will sound as cheesy as it reads, I'll just go with Cara Delevingne. I mean, she's huge right now. The truth can be our little secret.