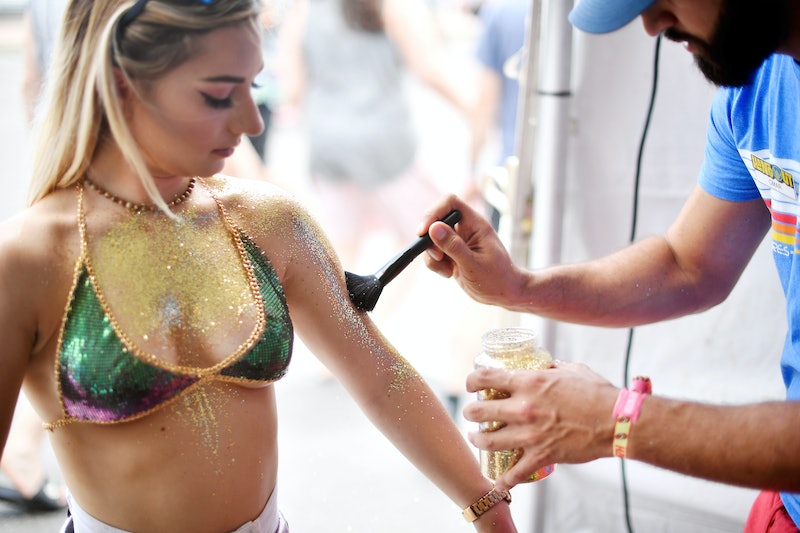 What do Mariah Carey's movie “Glitter,” Britney Spears' midriff, Collective Soul's hit single “Shine,” and your eighth grade dance have in common? All four hit their stride in the 1990s/early 2000s, all four are guaranteed to bring a flood of nostalgic tears to the eye of the most hardened Millennial, and all four centered around one very important element: Sparkle.

Where your eighth grade dance was concerned, the sparkle most likely came in the form of body glitter, a ubiquitous, gelatinous substance smeared all over the 1990s and early 2000s that separated the basic tweens from the cool tweens. Sure, our moms frowned on it, our principals banned it, and it inevitably migrated into our eyes by the end of the school day, but it didn't matter. Back then, our only purpose in life was to glitter like a disco ball from our midriffs to our brow bones.

Body glitter came in many forms: a roll-on stick, a squeezable tube of gel, a convenient spray, or tiny, stackable containers of the stuff. It sparkled in every color under the sun, from girly pastels to "hardcore" metallics, and the coolest glitter came with stars, hearts, or crescent moons suspended in the gel. How to apply it? Everywhere, and with a heavy hand. Our sparkliest body parts were brow bones, cheekbones, clavicles, shoulders, and the corners of our eyes (a cluster of stars there was particularly apropos). If your school and/or parents were real lenient, you'd smear it on your midriff; otherwise, you could also dab/spray/coat your legs, arms, neck, back, and hair with this product, the crack of beauty supplies.

Body glitter wasn't all innocent. It was also used to entrap tween boys into loving us, because we figured that the more we sparkled, the more Troy from seventh grade would FINALLY NOTICE THE WAY OUR BROW BONES SHONE WITH THE FORCE OF A THOUSAND SUNS. In sixth grade, my best friend was convinced that tween boys really cared about body glitter — like, she was pretty sure they had opinions on it — so she invented a fail-proof way of determining whether they liked it or not. One day, she'd wear glitter and mark how often her crush flirted with her; the next day, she'd go glitter-less and note how much he flirted with her then. One time, she became very distraught because she “couldn't figure out” if a certain guy liked her better with or without sparkle. He'd flirted with her the same amount on both days! WHAT DID IT MEAN?!

If boys didn't care much about body glitter one way or another, girls certainly did, to the point where they would try to SABOTAGE one another with black market body glitter "tips." At least, this is what happened to my friend Heaven, who noticed a “cool girl” wearing iridescent glitter on her brow bones one day after school. "I thought she looked pretty, so I asked how she achieved the look," writes Heaven. "'Glitter nail polish,' she replied. That night, I promptly did some bathroom solo experimentation of applying nail polish to my skin directly ABOVE MY EYES. I showed my mom, like, 'Look, isn't this pretty?' and she realized it was nail polish and FREAKED OUT. She was so scared about it getting into my eyes and promptly started scrubbing at my skin to get it off (I don't think she wanted to use nail polish remover in case it got in my eye). It was horrific. And I had a little scab there from all the skin that was rubbed off. Can I just say that I think the girl tricked me and was actually wearing body glitter?"

But our parents didn't always approve of our sparkle-encrusted tendencies. Plenty of us weren't allowed to wear it body glitter at all. My friend Lisa had to smuggle “crazy neon glitter” in to her eighth-grade dance and “smother it on sneakily.” Other times, we had to resort to the off-brand stuff.

"My mom had a mostly anti-makeup policy but Chapstick was ok, so I bought an eight-pack of glitter Chapstick in all different colors and used it all over my face and body," writes Lisa. "Later, I had glitter hair gel which contained sparkly confetti like 1/16 inch wide, which I, naturally, used on my CHEEKS. No wonder mom preferred me not having access to actual makeup..."

Was this parental paranoia, or did mom know best? “My mom thought it was really pointless and ugly, and she was right, as always,” writes Meri. “It was a weird way to draw attention to your body even though women's bodies are aways given attention anyway. I think what's weirdest is that little girls were wearing it.” It's true: Though we were pretty innocent, body glitter was undeniably intended to be sexual. The whole idea behind body glitter was one of emphasizing your "assets" — collarbones, midriffs — which was training for a lifelong career in making ourselves appealing and noticeable and sparkly, whether literally or figuratively. Like other weirdly girlish trends — the Kinderwhore movement, baby doll dresses — body glitter masqueraded as a cute, crafty, little-girl look, while cashing in on our burgeoning sexuality.

When the powers that be banned body glitter, maybe they weren't trying to protect us so much as trying to protect our pillows. After all, the most enduring characteristic of body glitter was that it never came off. "I remember it took me two damn years to get it out of my car after my date wore some to prom," writes Trevor, the only male who dared to respond to my call for body glitter nostalgia. Maybe that's why we loved it so much — because we could leave a trail of glitter behind, marking our lives with a giant, sparkly, "I WAS HERE" sign like a pop culture version of Hansel and Gretel scattering breadcrumbs in the forest. In our tiny, crazed, 1990s-fueled brains, we must have known that while glitter eyeliner was for a night, the half-life of body glitter was forever.

More like this
I Tried Marilyn Monroe's Makeup Tricks, & They're Pretty Genius
By Olivia Rose Ferreiro
10 Nail Trends That Perfectly Capture The Early 2000s
By Paris Giles
The Most Extra Party Girl Beauty Looks From The Early 2000s
By Paris Giles
'The Circle' Season 4 Star Yu Ling Wu Is Already A Beauty Icon
By Erin Stovall
Get Even More From Bustle — Sign Up For The Newsletter