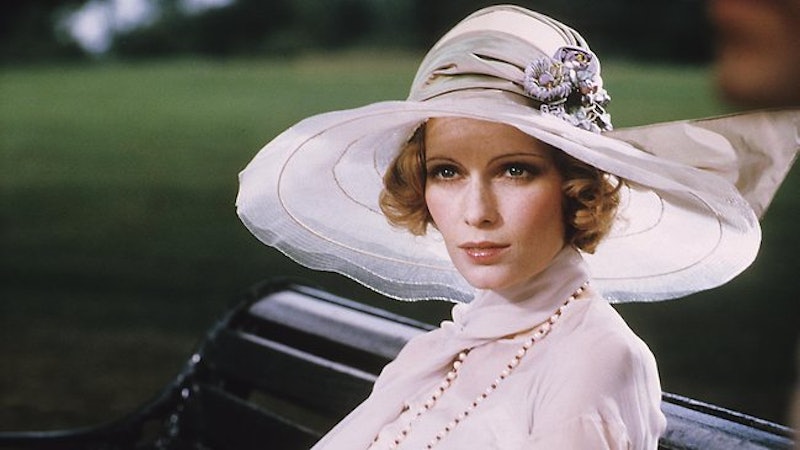 F. Scott Fitzgerald, the bard of the flapper era, turns 118 on Sept. 24, and what better time to muse a little bit about his work? The man was a master of a few things: sensitive prose, depictions of crumbling marriages, amazing passages about parties, and controversial portraits of women.

Like any artistic guy with a lot of feelings, Fitzgerald was deeply moved, inspired, and tortured by his relationships with women in real life, and constantly channeled their essence into his prose. The way he depicts women is half-adoring (they're gorgeous, dreamlike, outspoken, deliciously independent) and half-damning (they're flighty, shallow, manipulative, empty). Fitzgerald's heroines really are the beautiful and the damned, all wrapped into one glamorous flapper-clad package.

It's easy to read the standard Fitzgerald heroine as the manic pixie dream girl before the manic pixie dream girl ever existed — after all, she frequently acts like a lovely vessel into which men can pour their impossible dreams and bruised aspirations. But that's not giving Fitzgerald or his female characters enough credit. In his novels, the women almost always have a steel core beneath all their glitz and Champagne. If you've always wanted to live in a Fitzgerald story, you'll have to learn to act like his heroines do.

Always have a witty one-liner ready

The Fitzgerald heroine goes to a lot of parties — because what else is there to do in this mad, mad world? — and someone who goes to a lot of parties needs to perfect the art of the throw-away bon mot. Whether you sneer, “It’s a great advantage not to drink among hard-drinking people” (Jordan Baker), whisper, “You always look so cool” (Daisy Buchanan), or muse, “Death is the only real elegance” (Zelda Fitzgerald herself), you know that a pause in conversation must always be filled with something effortlessly clever.

Drink a lot of champagne

You'll need it, because being a Fitzgerald heroine comes with its fare share of emotional baggage. Besides, as Fitzgerald said, "Too much of anything is bad, but too much Champagne is just right,” and his heroines certainly agree.

Be much more complicated than you let on

Fitzgerald's women can seem like flighty, fragile, troubled beauties whose only role is to be flighty, fragile, troubled beauties, but to read them like that is to forget that Fitzgerald's great talent was writing that came beautifully close to the core of human experience, male and female. Daisy Buchanan is dreamy and careless, sure, but she makes a surprising number of hard, practical choices despite all her bubbly talk and shallow laughter. Nicole Diver in Tender is the Night is a broken, paranoid woman, but she has her reasons — and so on.

Men will use you as a form of wish fulfillment. Use them right back.

As the complicated and kind of dangerous Gloria Patch says in The Beautiful and the Damned, “A woman should be able to kiss a man beautifully and romantically without any desire to be either his wife or his mistress."

Pose as a decorative figure, but keep your core of iron

"In all Fitzgerald’s fiction women characters are decorative figures of seemingly fragile beauty, though in fact they are often vain, egoistical, even destructive and ruthless and thus frequently the survivors.” —Ivan Štrba, "Emancipated Women of the Great Gatsby"

Fitzgerald's women are often discontent with roles like “wife” and “mother,” and yet they never quite manage to achieve any sort of fulfillment beyond their fleeting youth, beauty, and fun. At one point in Tender is the Night, Nicole Diver sighs to her husband, “ When I get well I want to be a fine person like you, Dick,” which is a sad reflection of Fitzgerald's relationship to his wife in real life. Zelda Fitzgerald had a sharp wit and a wonderful way with words, but she never managed to parlay those skills into real art, despite frenetic attempts to transform herself into a dancer, an artist, and a writer.

Break up with him

Fitzgerald's first love was a glamorous minx named Ginevra King, who left him “with the most supreme boredom and indifference,” as he wrote in a letter to his daughter. This alluring unattainability would make her immortal, for many of Fitzgerald's characters are based on her — Daisy Buchanan, of course, being the most famous.

Flaunt your “outrageously modern self”

A Fitzgerald heroine may occasionally seem like a golden figment of the male imagination, but the one thing she can never be accused of? Being a wallflower. At parties, she can be louche and androgynous like Jordan Baker, careless and clever like Daisy Buchanan, or theatrical like Isabelle Borgé of This Side of Paradise, of whom Fitzgerald writes: "The things Isabelle could do socially with one idea were remarkable. First, she repeated it rapturously in an enthusiastic contralto with a soupçon of Southern accent; then she held it off at a distance and smiled at it—her wonderful smile; then she delivered it in variations and played a sort of mental catch with it, all this in the nominal form of dialogue." However she presents herself, she's always the center of attention, which is a subversive act for a woman. “While a lady stayed out of public view,” writes Rena Sanderson in "Women in Fitzgerald's Fiction," "the flapper puts herself in the spotlight and flaunts her outrageously modern self. She invites the public gaze and grooms herself accordingly.”

Act like a “mental baby vamp,” if you can figure out what that is

Fizgerald was never coy about the type of woman he liked to write about. He was always drawn to “the young woman of 1920 [who was] flirting, kissing, viewing life lightly, saying damn without a blush, playing along the danger line in an immature way – a sort of mental baby vamp.” Kind of sounds like the type of woman you want to dress up as for Halloween only. But if anything, a Fitzgerald woman would know how to make something that sounds like a stereotype into something completely her own.