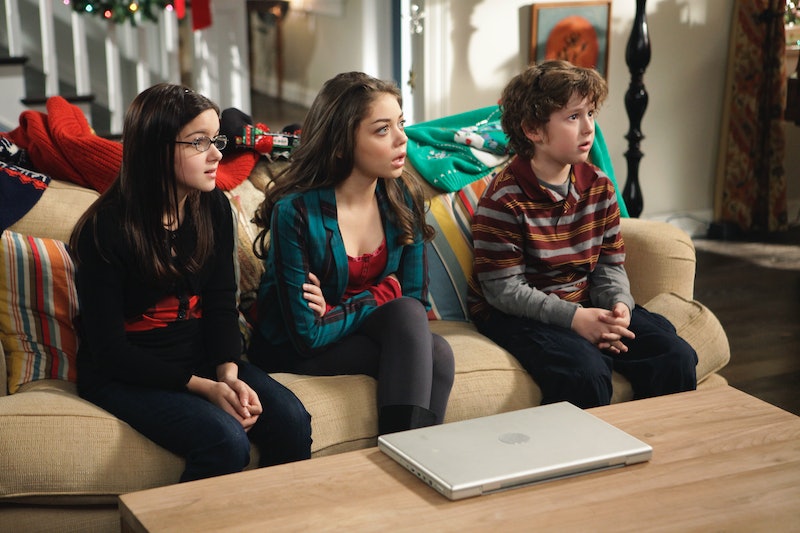 The situation involving Sarah Hyland and her allegedly abusive ex-boyfriend Matt Prokop is a terrifying one, and, sadly, all too common as well. According to reports, a restraining order that Hyland recently filed against Prokop alleges that he was threatening and violent towards her during their relationship, going so far as to, according to TMZ, "[pin Hyland] against a car during an argument about her outfit back in May," as well as throw a lighter at her, and "threaten to set one of her homes on fire." Thankfully, Hyland and Prokop's relationship is now dunzo and a judge did grant Hyland the restraining order, but it's terribly sad to think that something like this could have been going on so privately with a couple who were constantly in the public eye — it just goes to show how often abuse and domestic violence goes unseen, and, tragically, how common it can be.

Considering Hyland's series, Modern Family, is set to premiere season 6 tonight, this unfortunate situation may raise questions from fans about whether or not the series will ever choose to deal with the subject matter of domestic abuse — especially now given that one of their stars has experienced it firsthand. While there's absolutely no indication that Modern Family will ever plan to do take on a storyline like this, fans shouldn't question it regardless.

I can understand where the thought process would come from. On the one hand, the sad prevalence of domestic abuse in relationships is a topic that deserves to be given attention, and, historically, comedic sitcoms have chosen to tackle difficult and serious subject matter to raise awareness in their viewers — in fact, it happens so often, it has a term: The "Very Special Episode."

On the other, more important hand, though, Modern Family is above all else a comedy, and presenting a storyline involving abuse in a relationship wouldn't have a place in the often silly, mockumentary-style jokes that the plot employs for comedic relief.

Even when it covers serious issues like LGBQT rights and underage drinking, it does so with the inherent sense that we're not supposed to take this show so seriously. The show is fun, it's entertaining, and it's light — any attempts to deepen the tone in the effort of keeping true to its claim that its rooted in reality would feel out of place, awkward, and frankly disrespectful to those who, like Hyland (and even younger series star Ariel Winter, whose mother is facing abuse allegations) have experienced the trauma of an abusive relationship.

While I do hope that Hyland's situation being in the public eye will result in the subject of domestic abuse (specifically, combating it) receiving greater media attention, coverage should be left to more serious mediums than television sitcoms if it's to make an impact.

Serious subject matters always garners serious response — and this is one topic where that's needed now more than ever.