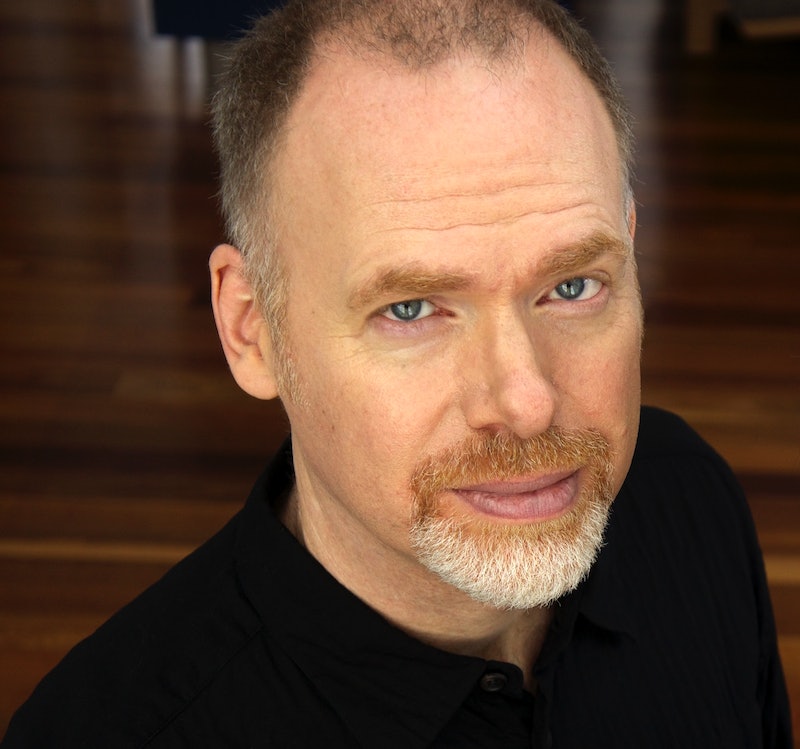 In Scott Westerfeld's latest novel Afterworlds (Simon Pulse), the Uglies author goes all meta on his young adult readers. His story is essentially a book within a book, switching back and forth between teenage author Darcy Patel's life after her first YA book was sold and the text of her novel. If you thought that might get confusing, just wait — there's more.

Darcy's novel Afterworlds, the title of Westerfeld's book, centers on Lizzie who survives a terrorist attack in an airport by pretending she's already dead. Her actions cause her to slip into another world, where she discovers that she is intended to act as a guide, bringing spirits into the afterworld. Within Darcy's pages (and, in turn, Westerfeld's) is a lot on the Gujarati culture, an Indian ethnic group, a fantasy story, a story about terrorism, and a romance between two women. And that's just Darcy's book. Westerfeld also includes so much about young adult literature and publishing.

If this sounds like it could get complicated, you're right. It could. But in Westerfeld's deft hands, it all flows together smoothly, with even voice and writing skill changing from Westerfeld's prose and Westerfeld-as-Darcy prose. It's an incredible feat.

Westerfeld isn't the only one to tackle this ambitious, meta style of novel — Wonder Boys by Michael Chabon and The Thirteenth Tale by Diane Setterfield come to mind. But it's far less common in the YA space, making Westerfeld's story unique. However, these 7 authors have also written YA and MG fiction books about books and writing, and you bet they have an inside look at that.

Meggie's bookbinder father is surrounded by books, but he never ever reads them aloud to her. It's not that he's a bad father, but he is cursed — or blessed, depending on your point of view — and any book read aloud to comes to life.

However, one night when she is 3, he reads a book called (you guessed it) Inkheart aloud to her, and the evil villain comes alive and traps her mother in the book. When she reaches 12, she figures out the secret in her past, and goes in rescue of her mother. Basically, if you've even been so wrapped up in a book that it feels like real life, you'll love the magic in Inkheart.

The Forbidden Library by Django Wexler

After her father dies, 12-year-old Alice (let's just say that the Wonderland namesake probably isn't a coincidence) is sent to live in her uncle's mansion. He gives her one warning: Avoid the library. But Alice is a rabid reader, and that's not as easy as it sounds. Eventually, by way of talking cat and annoying boy, she finds her way to the library. But the warnings were for a reason, it seems, as Alice becomes trapped in a book, fighting for her way about, as she learns secrets about her father and uncle along the way.

The Princess Bride by William Goldman

The Princess Bride needs no introduction.

But if you've only seen the movie, you are totally missing out. Goldman's original text is presented as an abridged version ("the good parts") of a fictional novel by S. Morgenstern, with Goldman's commentary throughout. It's genius. And it still has all that charm and magic we have all loved for years.

Ransom My Heart by Mia Thermopolis and Meg Cabot

Meg Cabot pulled a totally awesome move with Ransom Heart , alluding to the novel in her super-famous The Princess Diaries series. That other author? She's the fictional main character of her series, and this novel is written in "her" voice. What a cool, imaginative idea.

Hard Love 's John and Marisol are both zine-writers. They pour out their life stories, which eventually include each other, into these zines to talk about their dysfunctional families ("Interviews with the Stepfather") and other life struggles. John grows attracted to Marisol via her writing, and it pulls them into an unrequited love entanglement. The book is about, well, how love is hard, but it's hard to deny the strings throughout about being a writer and self expression.

The Neverending Story by Michael Ende

If you were a child of the '80s, chances are you remember The Neverending Story with Bastian, Atreyu, and Falcor the flying dog (otherwise known as the movie that made me unnecessarily worried about the danger of quicksand).

Like so many of the others, the heart of this story is the power of books and reading, how they can take you away from your life, even just for an hour or so, to a magical world where anything can happen.

Like Afterworlds, Jellicoe Road is told in alternating chapters. In one, the story centers on 17-year-old Taylor, who was long ago abandoned by her mother, and who now lives in a boarding school. Life in her community is divided into three dueling factions. The second story is Hannah's, the only adult Taylor trusts and who has disappeared, via an unfinished manuscript about an accident on Jellicoe Road 20 years earlier. The main story and the book within the book intertwine and inform each other in this stunning and totally mysterious way, and you can hardly see the seams in Marchetta's complex story.