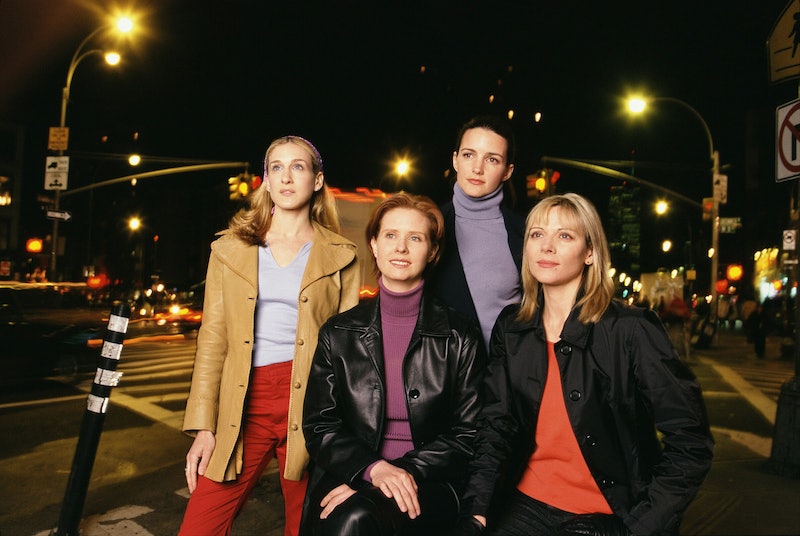 If you're anything like me, you have a complicated relationship with Sex and the City. Sure, it did a lot of great things for sex positivity, but that doesn't mean that I don't scream "Gender is a social construct!" at the screen at several points during yet another marathon on the E! channel. It was a progressive show for the late '90s, but it can be frustrating to watch today.

What's easier to love, however, is some of the earlier work from the Sex and the City ladies. Miranda, Charlotte, Samantha, and Carrie may seemingly have nothing in common, but Cynthia Nixon, Kristin Davis, Kim Cattrall, and Sarah Jessica Parker do: they were all struggling actresses in the late '80s and early '90s, a glorious time in the film industry in which Hollywood seemed to just shrug its shoulders and say "I don't know, just go ahead and film it, who cares."

So surprisingly, these women had all been in insane movies well before Sex and the City 2. So whether you're a diehard Sex and the City fan or not, you're sure to find some enjoyment in some of these treasures:

Flight of the Navigator

Flight of the Navigator has essentially everything you could want from an '80s sci-fi movie. Early special effects? Check. Crazy-looking aliens? Check. A wisecracking spaceship? Also check. A small child who also happens to be a genius? Check. Synth-heavy soundtrack? You bet. It essentially follows a young boy who has to pilot an alien ship, and it's made even better by an appearance of '80s Sarah Jessica Parker.

But really, you can't get more '80s then a movie both based on and named after a Cyndi Lauper song. And of course, it has all the hallmarks of an '80s teen movie: hot boys, stern dads, and dancing, dancing, dancing! And nuns doing gymnastics, for some reason. Sarah Jessica Parker is at her '80s best, with big hair, hanging with her best friend played by none other than Jodie freakin' Foster.

Remember this movie? The premise is essentially, "Home Alone, but with a baby!" Needless to say, it was a huge flop. But it does feature a young, blonde Cynthia Nixon as the unfortunate nanny.

Bonus: My Body, My Child

A very heavy made-for-TV movie in the '80s where Vanessa Redgrave's character must decide between having an abortion or having a deformed child. The film included not only a very young Nixon, but Sarah Jessica Parker, as well.

Only the '80s could have produced Mannequin, a movie where a man falls in love with a mannequin that comes to life. The lead is played by the guy from Pretty in Pink, while Kim Cattrall, of course, plays the sexy mannequin. My theory is that this film was originally pitched as Sex Doll: The Movie!

But of course, nothing can trump the ridiculousness of a movie starring Kurt Russell. If you don't watch Big Trouble in Little China for the cartoonish stereotypes or Cattrall's role as the movie's token sex trophy, at least watch it for the scene where the villain dies by getting so angry that he actually explodes.

Kristin Davis' resume before Sex and the City is surprisingly slim. But her second credit on IMBD just happens to be an incredible low-budget horror movie: Doom Asylum. The film hovers somewhere on the line between copy and parody, its characters being some of the thinnest horror-movie stereotypes: the nerd, the token black guy, the popular blonde and her boyfriend, the smart girl (Davis), and the wisecracking serial killer, a la Freddy Kruger. The one glaring difference, however, is the all-girl noise band who hangs out at the abandoned asylum. The have killer outfits, play a cover of Psychodrama's "Tormental," and are my personal heroes.