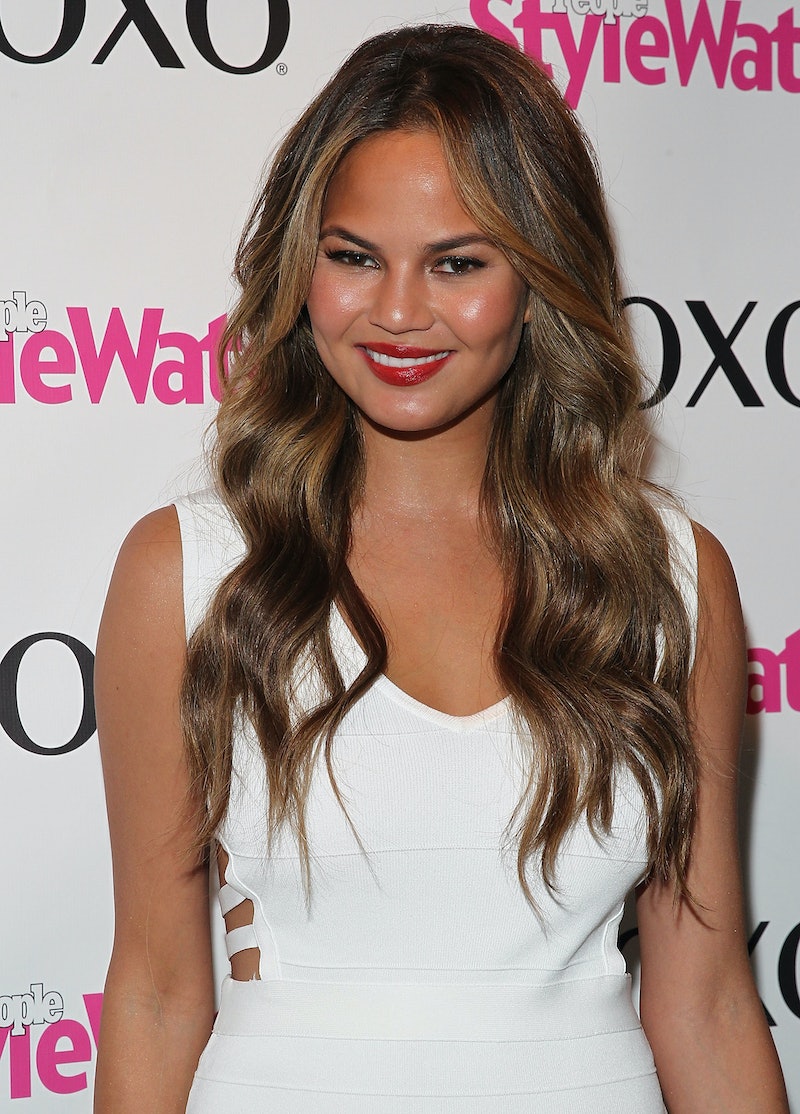 I admit that I used to have lukewarm feelings for supermodel Chrissy Teigen. Her funny but raunchy tweets had no affect on me, and I didn’t particularly "aw" when I heard her hubby John Legend croon "All of Me" to her during the Grammys. But you know what? I’m getting on the Teigen bandwagon because Chrissy Teigen is going to have a cookbook. I'm already a sucker for a good cookbook, food blog, and yes, Food Network show, so when I heard Teigen was going to add to the celeb cookbook genre, something she said she's been planning for a while, I was intrigued. I was also skeptical. I'm always skeptical when it comes to celebrities making recipes, because I think that they are too good for my Ramen packet makeovers. Celebrities, to me, like fancy accoutrements like white truffle oil or kale. They plate things with parsley. Their kitchens have stand mixers. We're just from different worlds.

But Teigen — who shares her foodie knowledge on Instagram and on her blog, So Delushious — won me over when she said she didn't have a signature dish, but that she had a signature message for hers. "I want young girls to know that they can stay home on a Friday night and cook soup and feel cool about it," she told E! "Not have that FOMO thing — that fear of missing out. I want them to feel like they can stay home."

I love that. As someone who loves soup — so much so that I have a Christmas ornament soup bowl — and staying in on Friday nights, this is an excellent message to send out. Unfortunately, I have to wait a while for her cookbook. According to Teigen, "It’s still in little tiny baby stages — if there’s ever, like, any fetus of a book, that’s the book."

So while I wait for Teigen to get on that, I'll take a look at other celebrity cookbooks to whet my appetite.

Coolio calls it "Ghetto Gourmet" and it's all easy to make comfort food that won't break the bank. If that doesn't sell you on it, there are chapters called "How to Become a Kitchen Pimp" and "Pasta Like a Rasta." I just found your new go-to gift, didn't I?

I consider Stanley Tucci my spirit guide. This is possibly from watching The Devil Wears Prada one too many times, but I will certainly listen despite that because Stanley Tucci will teach me Italian dishes he learned through his upbringing. And I won't mind that he makes me use fancy things like fennel.

If It Makes You Healthy

This cookbook by Sheryl Crow and Chuck White gets bonus points for playing into Crow's hit single, "If It Makes You Happy," because it makes the healthy part acceptable and distracts me with song.

I was super surprised when Gwyneth Paltrow decided to make her first cookbook, then she went ahead and made another. I choose to believe that Paltrow's got a handle on clean eating, mainly because she chose to name her daughter Apple.

Chrissy Teigen's book is still in the fetus planning stages, but with Coolio, Dolly, and Gwyneth, her book will definitely have some excellent company on the celebrity cookbook shelf.