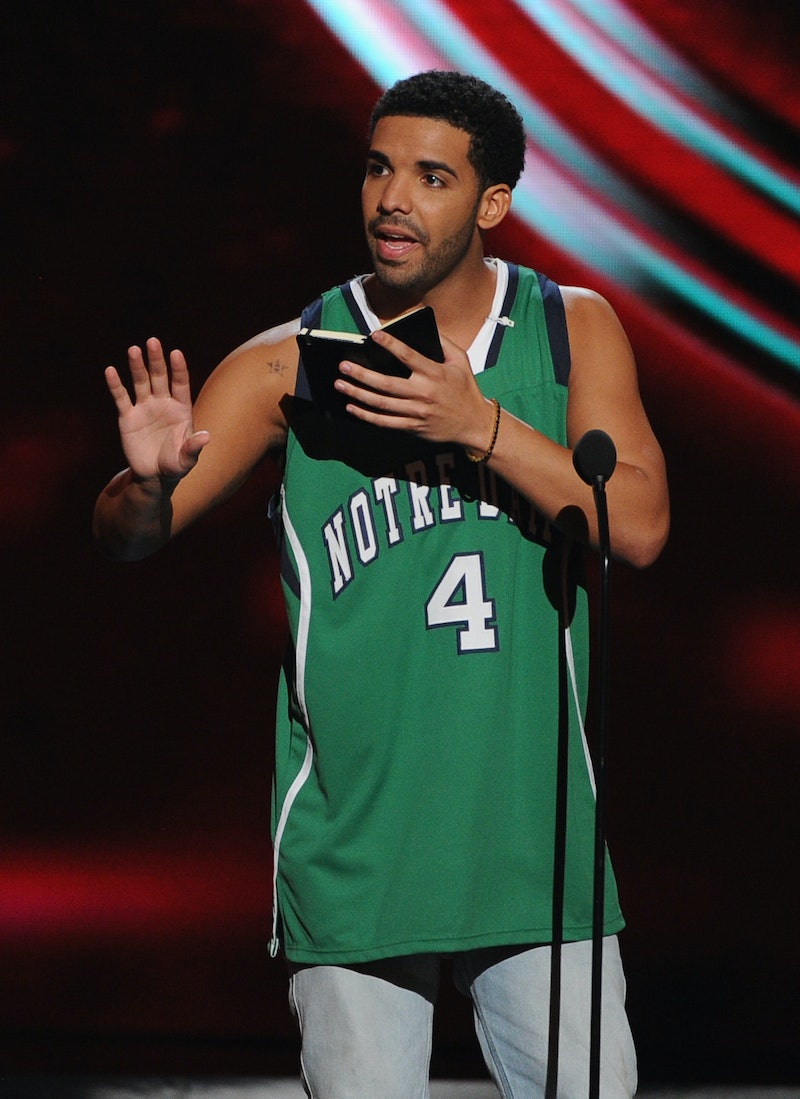 I hadn't considered it until about five minutes ago, but I guess emoji tattoos were bound to happen. Heck, there are probably tons of them already. I bet people have those two dancing girls on their backs, the pile of poop on their ankles — and oh my god, y'all, we already know Miley Cyrus had a (possibly temporary) tattoo of the crying cat on her inner lip! I am really behind the times! But you know who isn't? Drake. At least it appears that he is up on his emoji tattoo game. Judging by a photo tattoo artist Dr. Woo (real name?) posted to Instagram, Drake may have a tattoo of the praying hands emoji. Oh what a world we live in!

The Instagram shows a black and white picture of two arms (or legs?! Let's not discount legs as an option), one with a tattoo that reads "Everything happens for a reason sweet thing" and one with the emoji tattoo next to a number 6 (or is it a number 9...). Dr. Woo's caption on the picture reads, "@champagnepapi good times, thanks for the visit #jimjoe6 🙏 #wordsofwisdom #shamrocksocialclub." Champagnepapi is, of course (yes, of course), Drake's Instagram handle. This makes it seem pretty clear that Drake got the tattoo, but it's still hard to believe because why oh why would you get an emoji tattoo??? This is the equivalent of getting a tattoo of a pog in 1995 or a Razr phone ten years ago. It is going to be dated immediately.

Aside from being a questionable choice for a tattoo (those last forever, in case you forgot), what does it even mean? Are the hands next to a six/nine because the same way you can't tell which number it is, you can't tell if this is a praying hands emoji or a high five emoji? Is it about six people he's praying for? And why does it face away from him when the other tattoo faces toward him? Does Drake not have a slight, yet healthy, amount of ODC?!

After doing a bit of research, it seems that the real answer is that the tattoo is in reference to Drake's rumored new song "6 God." Sounds like he's on Team Praying Hands, then. And the website Kanyetothe.com has a screenshot of a couple now deleted comments Drake supposedly wrote on Dr. Woo's Instagram. In the screenshot Drake wrote, "It will be a debate until the end of time... high five or praying hands... life is what u make it haaa." And a second comments which reads, "I pity the fool who high fives in 2014."

There seems to be some good evidence here that Drake really did get an emoji tattooed on himself but since I'm still in denial about someone doing that, my guess is that the emoji tattoo is temporary, the six/nine was drawn on with a Sharpie, and the real new tattoo is the "Everything happens for a reason sweet thing" one.

While I might not agree with Drake on his new tattoo choice, I do agree with him on one point: Those are definitely praying hands. Otherwise why are the hands mirror images?! Same-handed high five? I think not!