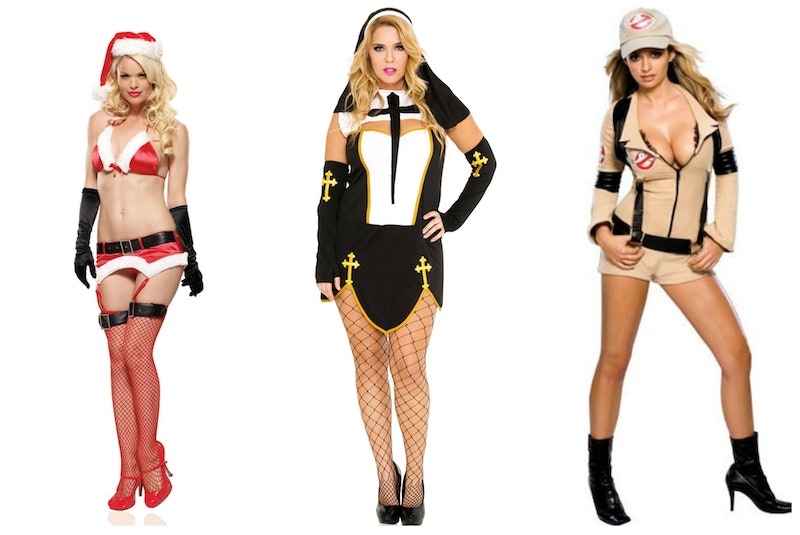 It’s no secret that mass-produced Halloween costumes for adult women are ridiculous. On the one hand, I can kind of understand the draw — in the words of Mean Girls, it’s the one time of year girls can dress as complete sluts and no other girls can say anything about it; furthermore, in some respects, they kind of speak to sexual liberation, loving your body, and all that good stuff. But as the New York Times pointed out as far back as 2006, where the costumes for men available in Halloween stores across the country tend to be “cool” or “funny,” women’s are almost exclusively “sexy.” Why is that?

As is the case with many of these types of issues, the problem isn’t the fact that sexy women’s Halloween costumes exist as options; the problem is the fact that they exist as pretty much the only options (especially if you’re not skilled enough in the DIY department to make your own costumes). This is the point that the Tumblr Beautiful Obsession drove home in a recent post that’s since gone viral: Featuring a series of photos shot from a Halloween costume catalog, the Tumblr then added captions to each image via Snapchat that say what we’re all not-so-secretly thinking about them. Why, for example, doesn’t the baseball uniform include pants? Would anyone actually be able to fight crime in that Batgirl outfit? Why is the Olive Oyl costume described as “sexy,” while Popeye just gets to be, y’know, himself?

The Beautiful Obsession post got me wondering: If this is what we’re thinking about those ridiculous “sexy” Halloween costumes, what might the costumes themselves be thinking? If these costumes could talk, they might say something like this:

1. Sexy Silence of the Lambs Costume

“I am so glad I asked my good friend Karl Lagerfeld to spruce up my straitjacket for me — that dirty old canvas number just wouldn’t do at all.”

“PREPARE THYSELVES, SPIRITS! FOR I SHALL BRING THEE DOWN WITH THE POWER OF MY BOOBS!”

“Dammit, Nick! How would you like it if I locked you out of the house in your underwear? We live on the North Pole!”

“Geez — just how much butt paste did Miley use to keep this thing in place?!”

“Things I will not be doing tonight include bending over. Or walking. Or moving at all.”

“Coach? Are you sure this uniform is up to regulation standards?”

“I sincerely hope I don’t have to chase perps on foot. That’s just going to end in tears and broken ankles.”

“Aaaaaaaand I look like a penis. A blue one. Awesome.”