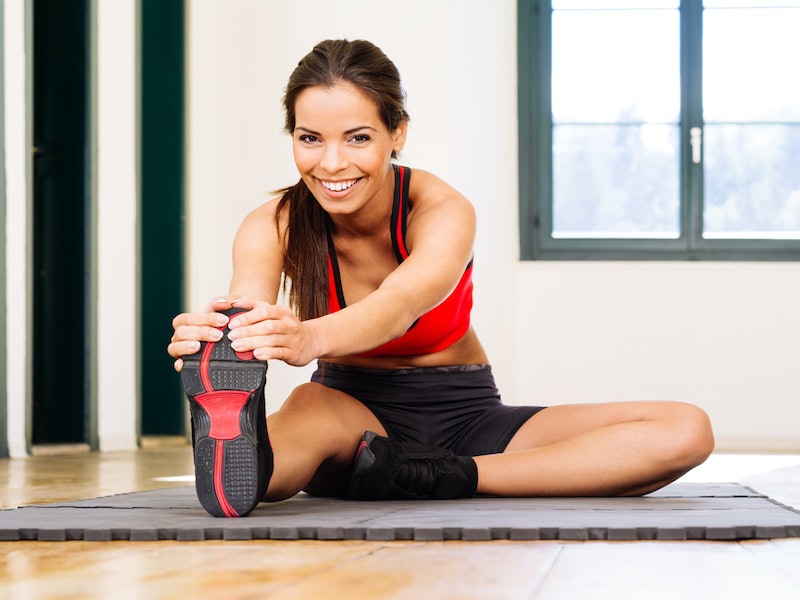 On the list of healthy things we should be doing on a daily basis, exercise is definitely at the top — but what if there was a serious downside to getting in your daily hour at the gym? Exercise can actually be bad for your teeth, according to a new study. Wait... what?!

The New York Times notes that for the study — which was conducted at the dental school at University Hospital Heidelberg in Germany and published in The Scandinavian Journal of Medicine & Science in Sports — researchers focused on athletes and the effects of endurance training on dental health. They observed 35 triathletes and 35 "non-exercising controls" (so common Netflix addicts like myself) and found that the triathletes showed more dental erosion than the controls. But why?

One's first thought would probably be: sports drinks. It just makes sense. Athletes need to keep up with those electrolytes — and the sports drinks that provide them seem like they are loaded with the kinds of sugars and acids that could ruin anyone's teeth. But no! That's not the issue here. In fact, researchers found that there is zero correlation between the sports drinks athletes consume and the state of their teeth. The culprit here is actually... their saliva.

Yes, saliva! During the study, the researchers found that the athletes showed a decrease in the amount of the saliva they produced during exercise — which caused their mouths to become drier. According to the Times, the "chemical composition" of their saliva changed as well, causing it to be more alkaline. Since saliva plays an important role when it comes to regenerating tooth enamel as well as cleansing the teeth, says MSN Healthy Living, it only makes sense that their altered spit (or lack their of) is to blame.

Now, I'm not saying this is an excuse to not exercise or continue training. No way! Never. It's simply a wakeup call to pay attention to your mouth just a little more. But you can't help but wonder, what other random habits are eroding your precious teeth right now?

Aside from the usual suspects — coffee, tea, soda, cigarettes, using your teeth to do things like open bottles or cut objects in half — there are a few other unsuspecting, yet common habits that might be contributing to poor dental health. In fact, you could be doing one of them right this second, like...

Yep, apparently, the purification process your bottled water goes through can make that H2O more acidic, which can lead to more cavities. And back to the Brita filter I go...

Sadly, breath mints are loaded with sugar, which, as we call know is the ultimate smile nemesis. That's why you should switch to sugar-free mints, which actually contain xylitol — a sweetener associated with killing cavity-causing bacteria.

Not unlike chewing on ice or popcorn, mouth piercings can actually chip away at your teeth, says WebMD. I'm all for self expression, but losing your teeth might be worse. Pierce with caution!

We knew there had to be a downside to the whole smoothies and green juices thing (other than cleanse-induced hanger blackouts). According to BBC News, the amount of sugar and acid in your average old smoothie can actually damage your teeth. Perhaps straws and rinsing with water is in order?