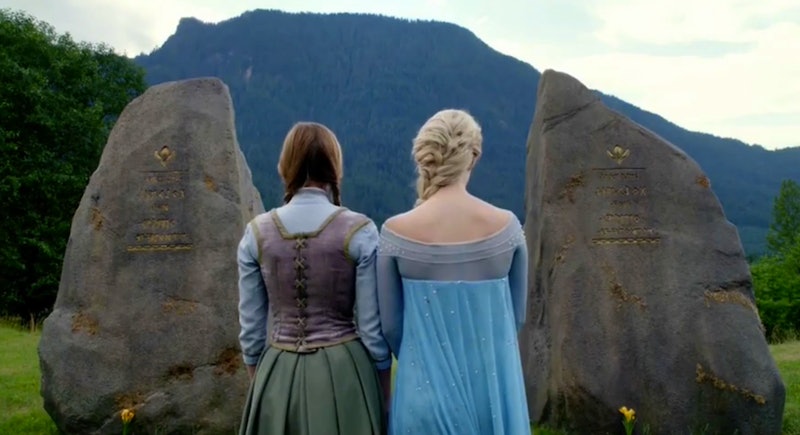 Sunday marks the return of Once Upon A Time to ABC, coming right along with the debut of Frozen to the television world. This marks a whole new territory for the show, as well as some new challenges for their previously introduced characters. Now we've got the first seven minutes of Once Upon A Time 's season premiere to (finally) get a glimpse into this whole situation for ourselves. A lot is still yet to be seen, but so far I'm...intrigued?

To be honest, the Frozen hook isn't the thing that's got me captivated going into this season of Once Upon A Time — it's the characters the show's already got on the mat. But the Frozen thing is certainly of interest, and it's a nice smattering of what we see in these first seven minutes. Let's explore together, shall we?

We open on Elsa and Anna's parents

Most notably on their death scene. They seem to have left Anna and Elsa some kind of message in a bottle as their ship sinks. Maybe this will make them less terrible parents than they were in the movie?

We are indeed approaching Anna's wedding

This is something we've known for a while, but now I'm curious about how the timeline's gonna shake out: When we see the sisters bonding pre-wedding, that's in the "long time ago, far far away" sphere of things. So what's the deal once they're all in Storybrooke? Will they ever all make it to Storybrook proper?

Regina's Got Some Thinking To Do

Last we saw Regina, a huge wrench had been thrown into her love life in the form of her new love's dead wife being brought back to life by her son's other mother. So yeah, things are complicated. Once again someone (this time around the formerly dead Marion) is thinking of her only as the Evil Queen, and it's thrusting Regina into the kind of existential funk that can only lead to trouble. After an emotional and frustrated conversation with Emma and a pretty uncomfortable confrontation with Marion, Regina runs of to...well, we don't know where yet. But considering there are only a limited number of people wandering the streets of Storybrooke that night with everyone tied up at the diner, I've got a feeling she's gonna run into another existentially lost Queen...

Elsa Does Not Deal Well With Cars

I doubt she actually did any damage to the dwarves inside, but this seems like enough to get Storybrooke worked up about her.