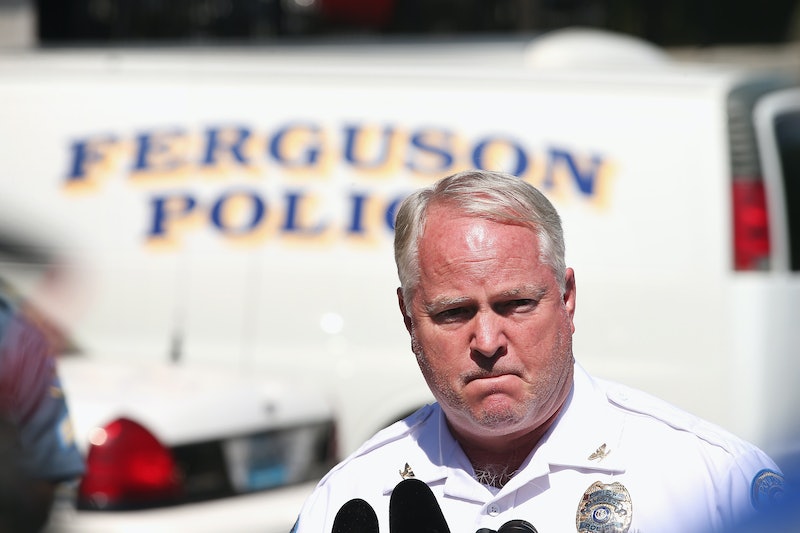 It's been almost two months since 18-year-old Michael Brown was shot dead by police officer Darren Wilson, and not much has been resolved in Ferguson, Missouri. The protests and ensuing excessive police force have quieted down, but two federal investigations, as well as a grand jury investigation into a possible indictment of Wilson, are still underway. However, residents of the St. Louis suburb, including the family of Michael Brown, did receive a long overdue apology from Ferguson Police Chief Thomas Jackson on Thursday.

Jackson issued his apology via a video statement. The police chief begins by saying he wants to be part of "the conversation about racism, equality and the role of policing" — a conversation he was thrust into when news of Brown's death spread across the country. He then addresses the family of 18-year-old Brown, who was unarmed when he was shot in the early afternoon of Saturday, Aug. 9.

No one who has not experienced the loss of a child can understand what you're feeling. I'm truly sorry for the loss of your son. I'm also sorry that it took so long to remove Michael from the street. The time that it took involved very important work on the part of investigators who were trying collect evidence and gain a true picture of what happened that day. But it was just too long, and I am truly sorry for that.

Jackson also apologized to the peaceful protesters who came to Ferguson, acknowledging that he didn't do enough to "protect their constitutional right to protest." He added that he was personally responsible for those whose rights were violated.

The police chief ended his speech by emphasizing that though the city has "much work to do," it can be done together.

It's an honor to serve the city of Ferguson and the people who live there. I look forward to working with you in the future to solve our problems, and once again, I deeply apologize to the Brown family.

Jackson received heavy criticism following the shooting of Brown and the ensuing unrest in Ferguson, made even worse by the use of excessive police force, including spraying tear gas and rubber bullets at protesters. The police chief came under fire when he released the video that allegedly shows Brown robbing a convenience story on the same day he was shot.

Jackson released this video to the public against the recommendation of the Department of Justice, which advised Jackson to hold back the footage because it would spark more anger and tension in the city. At the time of the video's release, Jackson told reporters he showed the footage because "the press asked for it."