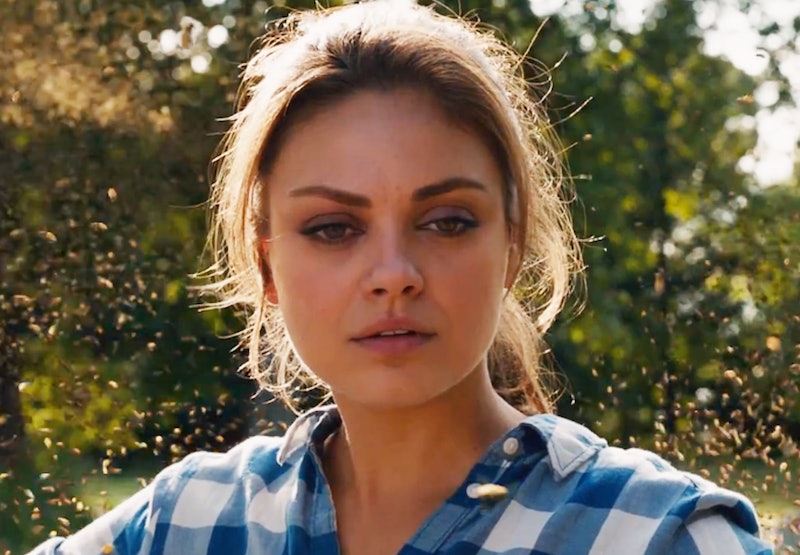 When I see a bad movie trailer involving a star that I like — in this case, Mila Kunis — I always feel like I have to do the whole Liz Lemon-condescending-compliment thing when talking about it. It's always, "Mila Kunis had one really good line!" or maybe, "the lighting was really neat!" — when bad movies happen to good actors, it's always awkward and sad for everyone involved. Though I'm really trying my hardest to withhold judgment about this one until I see more, it kind of looks like this may have happened to poor Kunis: The new international trailer for Jupiter Ascending just came out, and for a film that's supposed to be overwhelmingly magical and awe-inspiring, well...it's really kind of just overwhelmingly meh.

The film, which was originally supposed to be released this year but was bumped to Feb. 2015 under the official reasoning of special effects needing more time to be completed, basically follows the story of Kunis' character Jupiter Jones (how's THAT for a name?), a girl who works as a janitor on planet Earth, only to find out she's actually a reincarnated leader of some distant planet, so she's kind of alien royalty. Think The Princess Diaries, without Mia's frizzy, pre-makeover hair. Channing Tatum also stars as an alien hybrid ex-military soldier named Caine Wise, whose romantic involvement with Jupiter results in one of the best lines from this entire trailer:

CAINE: "Your majesty, I have more in common with a dog than I have with you."

Look, if you had an alien dude in front of you who looked like Channing Tatum, you'd feel the same way too.

Anyway, it's not really that Jupiter Ascending looks like a terrible movie, or is going to be a trainwreck or anything — it's just a little underwhelming so far. It'll likely end up being a pretty solid, fun popcorn movie when it's released next year, and that's not a bad thing at all.