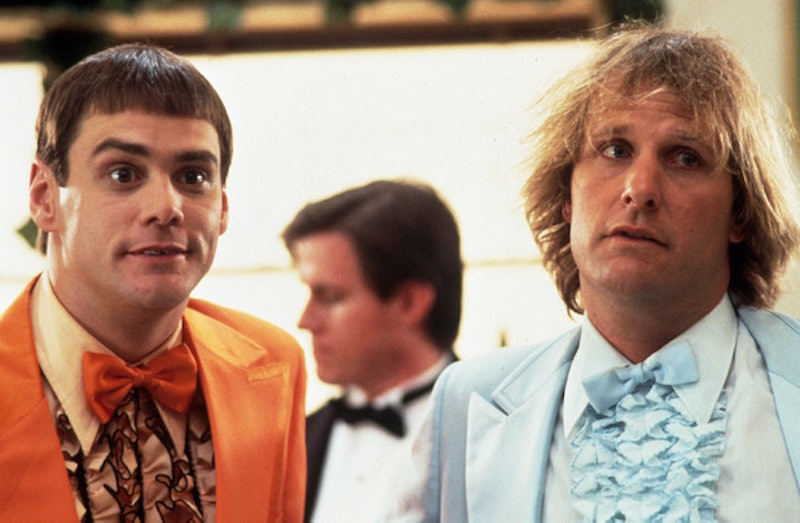 This November, 90s goofball comedy classic Dumb and Dumber is returning with a sequel, Dumb and Dumber To . According to The Hollywood Reporter, Jim Carrey and Jeff Daniels are returning to their starring roles, with Bobby and Peter Farrelly also coming back as directors for the sequel. This is definitely great news for diehard fans of the original, though, as Flavorwire reports, Dumb and Dumber seems like kind of an odd choice for a sequel:

The movie, though it succeeded impressively at world-building, was tied around a fairly succinct plot that was left with little or no strings hanging. When 2003 brought an undercooked prequel, Dumb and Dumberer, the world reacted appropriately, giving it $26 million in comparison to the original’s $250 million.

While Dumb and Dumber To definitely has the nostalgia factor going for it, but it's unclear whether nostalgia alone will be enough to carry the sequel. There is such a thing as too much 90s nostalgia, and nostalgia for the sake of being nostalgic doesn't really work.

In the spirit of full disclosure, Dumb and Dumber To doesn't look bad at all. Actually, it looks kind of hilarious. The sequel sees Carrey and Daniels hit the road as their original characters Harry and Lloyd. The two set out on a quest to find Daniels’ illegitimate daughter, played by Emma Stone, for a kidney transplant. Carrey's character develops a massive crush on her, just like in real life. Judging by the trailer, there's some serious potential for a hilarious 90s throwback.

More like this
Then Vs. Now Photos Of The 'Enchanted' Cast In 2007 & The Sequel's Stars In 2022
By Marina Watts
See 'Twilight' Stars Together Again For A Sweet Cullen "Family Reunion"
By Stephanie Topacio Long
'The Princess Diaries 3' May Go Ahead Without Anne Hathaway
By Darshita Goyal
How To Stream Knives Out 2: When Will Glass Onion Be On Netflix?
By Radhika Menon
Get Even More From Bustle — Sign Up For The Newsletter