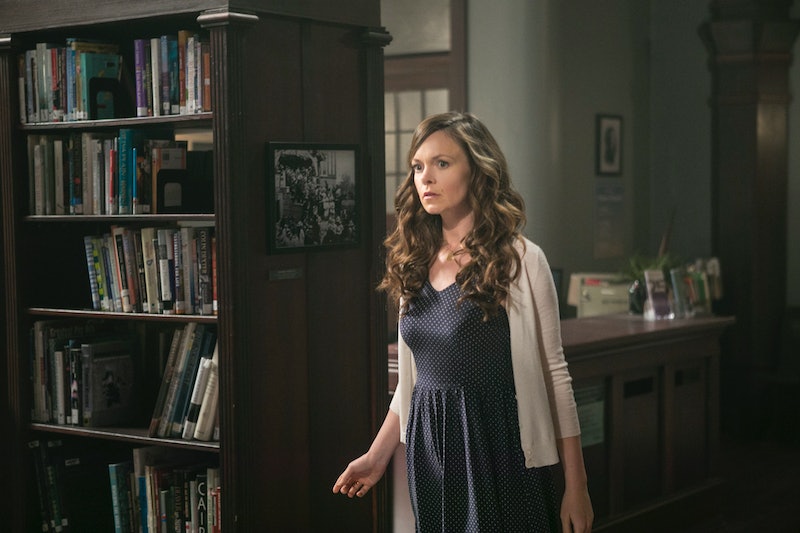 There's only one episode left before the Witches of East End's two-hour Season 2 finale. I know, you can't believe it — it feels like it was just last week that Ingrid and Freya came back to life on Witches of East End . Oh wait, it was last week. And in the promo for Sunday night's penultimate episode, "Poe Way Out," it's clear that Ingrid's putting herself in yet another precarious situation. So, how long will it be until she's dead again now that's she's joining her grandfather's team in Asgard?

Season 2 has been a crazy season for Ingrid Beauchamp — OK, it's been a crazy season for all of these characters, but between her relationship with the Sex Monster and with murderous Dash, Ingrid's really been pushing it. So when she and Freya were killed and then brought back to life, I was hoping she'd lay low for a little while. Well, not so much — not that it surprised me, Ingrid's essentially had a death wish since WoEE premiered its first season. And her future is looking pretty bleak in the final episodes of Season 2 with her latest decision.

Last Sunday Ingrid decided to stay behind with her grandfather, because taking Joanna and Wendy's word for the fact that he's a terrible man means nothing to her. Or she just feels like she owes him something because he saved her life after his minion, Tarkoff, killed her. I know, this situation seems ridiculous — what could she owe a man for saving her life when it was his fault that she and Freya died in the first place? But Ingrid decided to stay with him anyway while Joanna, Freya, and Wendy took a trip back in time to protect themselves from grandpa The King. It really made me angry, because considering all of the trouble Wendy went through to safely return Ingrid to the world of the living, it's kind of a slap in the face for Ingrid to put herself in harm's way again.

In this promo for "Poe Way Out" we see Ingrid telling her grandfather that she wants to go back with him to Asgard. First of all, WTF, INGRID?! What about the rest of your family? You know, the ones that didn't want to kill you and Joanna and went out on a dangerous limb to get you back. What about Tommy? Aunt Wendy loved him and she killed him for you. Does that mean nothing to you? Apparently, because Ingrid's ready to run off into the sunset, under her grandfather's wing, and return to Asgard. So, when will Ingrid start suffering the consequences of her actions?

This is an extremely risky move for someone that just had to be raised from the dead. And, like I mentioned before, Ingrid's been putting herself in risky situations all season. It's hardly fair that she's allowed to keep doing this without ever having to answer for her obvious mistakes while everyone else has to suffer for them. But her time might be coming — when Ingrid tells her grandfather that she wants to leave with him and hugs him, there's a sinister look in his eye that can't mean good things. Sure, he brought her back to life, but that doesn't mean he cares even a little bit about her well-being. This guy is just evil. He tortured Frederick, and his two daughters would rather live in colonial times than be in the same year as him. That doesn't exactly sound like a man of the year and doting grandfather to me.

Will Ingrid survive life with her grandfather in Asgard? Or will she end up being a slave to him, just like Frederick? I hope Ingrid survives this season, but if she doesn't, she really can't blame anyone but herself.