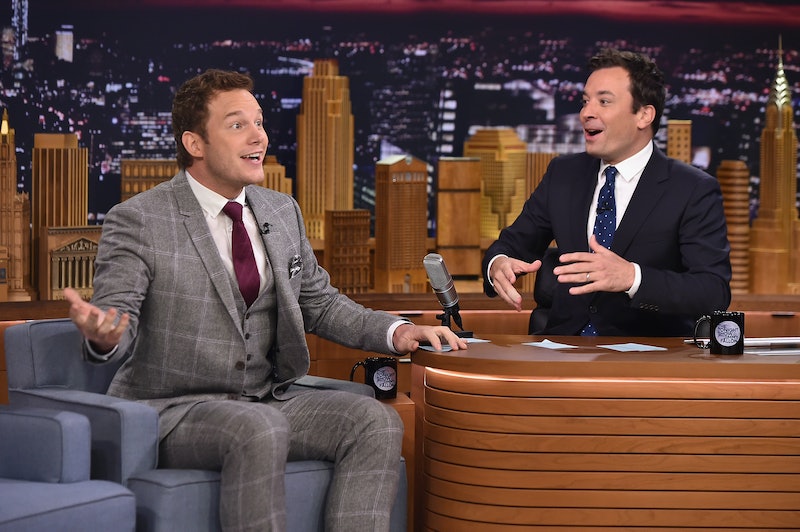 On Thursday's The Tonight Show, Chris Pratt revealed the story behind his infamous first headshot. Pratt posted the headshot to Twitter on Sept. 11 with the caption: "The name's Douchemaster McChest and this is my first headshot. You're welcome. #throwbackthursday circa 2000." This in itself was a moment of self-awareness, but the subsequent story behind it was even more hilarious.

Pratt seems to have a knack for self-deprecating humor, a talent that has really come to light in recent TV appearances. Perhaps his transformation from lovable goofball to lovable heartthrob required an amount of self-awareness for him to stay, well, lovable. He always seems a little bewildered by his fame, and he's all too ready to reminisce on the times that preceded it. Even though he is a man of many talents, including french braiding, rapping, and ab-having, he still seems to see himself as a pretty goofy dude. It ocassionally even feels a little over the top. Here are eight of Pratt's most self-deprecating moments.

His explanations of his new physique

Pratt received a lot of questions about how he went from chubby to muscled, and Pratt almost always responded with an answer that was as bashful as it was implausible.

When he flashed the cast of Parks And Rec

From making sure he knew what "admonished" meant to discussing how genuinely scared he was of getting fired, his Late Night With Seth Meyers story is strangely not cocky (see what I did there?) for a story about flashing Amy Poehler.

Rather than trying to cover up his origins, Pratt posts pictures like this of the van he lived in in Hawaii.

His answer to the question: are you a good husband?

He just doesn't know what to do.

Sharing his love of sound effects

On the set of the blockbuster that was Guardians of the Galaxy, Pratt was basically a little kid.

Risking the wrath of Lorne Michaels.

His candid story about trying to make it in Hollywood is funny, but also a little sad.