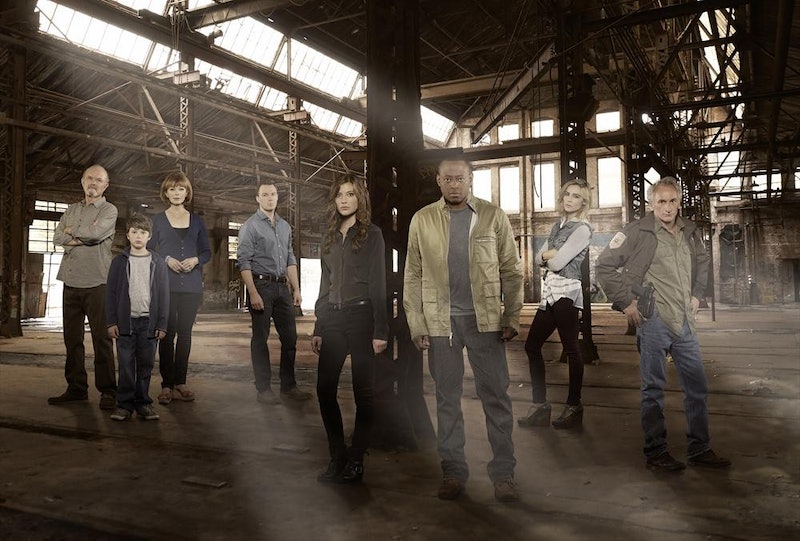 In a world where the zombie genre has been done and re-done many times over, it's refreshing to see a story about the living dead that doesn't feature lurching lepers with rotting flesh falling from their face. ABC's Resurrection , based on the novel The Returned by Jason Mott, features people being pretty unfazed by the dead coming back to life, without aging or looking too different from the time of their death. So why the heck are people coming back from the dead and what is the town of Arcadia going to do about it?

Unfortunately, we don't know quite enough yet to wrap up those questions in a neat little package. You could hear the collective groans of fans across the internet with all of the questions the show's season finale didn't answer. What we do know is that the town and the Sheriff have turned against the returned dead folk, interning them at the school gym while military forces come to the town's aid (or is it their peril?). An exciting tidbit the tail end of Season 1 did deliver is the discovery that the blood of the returned might have the power to fight leukemia, and possibly other life-threatening diseases.

Does that mean that the dead, who are now basically trapped in a military camp, will be used as blood farms where they are harvested for their life-giving plasma cells? That would be a pretty trippy loop, and it will be interesting to see how the writers play out what is essentially being set up as a world where immortality or something like it might be possible. One thing is for certain, the show is going to have to rev up it's Season 2. The rub with high premise shows like this is you need to tease the mystery for the show to exist at all, but you also need to give the audience something about the rules and realities of the story's universe. So far, Resurrection isn't delivering too much on the answers front, which is a shame, because it would be nice to know that the show was on track to explain something about why the undead walk the Earth, or that they have an answer planned at all.

Executive Producer Aaron Zelman confirmed to TV Guide, pre-Season 1 finale, that we "won't get a definitive answer" on why people are returning, something he certainly delivered on. But perhaps focusing on the nerdier details of the dead's origins isn't the point the show is trying to make this season. That is, if they are trying to maintain some connection to the novel's themes. Author Mott sat down with CNN to talk about his book and the show, remarking that the book wasn't about some fantastical horror or fantasy presence so much as it was about losing someone, learning to live without them, and then having them return to your life.

While the show seems to be going big into the sci-fi/fantasy and mystery angles (the military presence especially recalls other works in the monster/zombie/alien takes over small town genre), it's still worth a look see to discover what Season 2 might unveil.