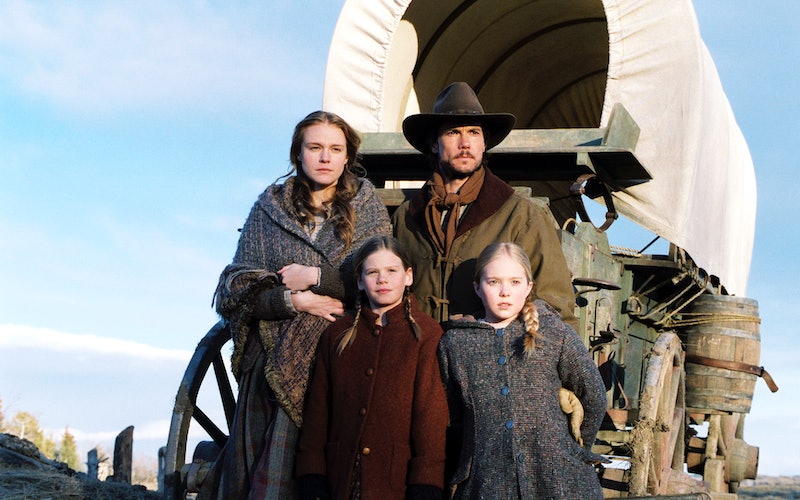 When I was a kid, I would tell people that I was Laura Ingalls Wilder in a past life. All the evidence was there: We looked alike (straight brown hair and short like a half-pint of cider half drunk up), acted alike (stubborn, smart, independent, mischievous); she was a best-selling author, exactly what I wanted to be someday, and we both made excellent pioneers. Well, at least, I thought I would make an excellent pioneer, if given the chance.

Wilder's stories of the struggles and triumphs her family faced as part of the Westward Expansion movement in the late 19th century, captured in her Little House on the Prairie book series, were fascinating to me. Everything about her experiences, from the places her family traveled to how they entertained themselves to what they ate, was different from my own sheltered suburban upbringing. And Laura herself - curious, willful, impulsive - was a heroine with whom I could identify from the moment I picked up the first book. While my female peers were idolizing Rachel Green and Cher Horowitz, I was stealing my mom's nightgowns and begging her to buy me Amish bonnets so I could emulate my idol.

Twenty years later, I realize I actually probably would have made a piss-poor pioneer girl. I can barely tolerate a cold toilet seat first thing in the morning, let alone an outhouse; am generally shit at physical labor, and would not have been down with the expectations for women in the late 19th century. However, re-reading the Little House books always makes me feel a tug of longing for all of the parts of pioneer life that I found so fascinating and exciting as a kid, and think, "Yeah, I could hack it."

Wilder's descriptions of her family's roughly 600-mile journey from Pepin, Wisconsin to Independence, Kansas, were so vivid that editors made her age up the Laura character in the books, as they couldn't believe Wilder, who was actually only two years old when the family moved, could have such strong memories. Indeed, the first few chapters of Little House on the Prairie, which chronicle the Ingalls' journey, were so detailed they made me feel as if I was tucked snugly in the back of the wagon with Laura and Mary, watching the jack rabbits play in the high prairie grass and feeling the wagon roll and sway beneath me. I wanted to make camp with the Ingallses on the high prairie, eating cornmeal cakes and salt pork cooked on a griddle, exploring the plains under an enormous blue sky, and fall asleep under a canopy of stars like this:

Thickly in front of the open wagon-top hung the large, glittering stars. Pa could reach then, Laura though. She wished he would pick the largest one from the thread on which it hung from the sky, and give it to her. She was wide awake, she was not sleepy at all, but suddenly, she was very much surprised. The large star winked at her!

2. Racing ponies across the prairie

Although the horses in the Little House books are mentioned so frequently and play such an important role in the family's survival that they're almost characters in and of themselves, Laura doesn't actually experience the joy of riding until By the Shores of Silver Lake, the fifth book of the series, when the family heads into what was then Dakota Territory. There, Laura gets to spend an afternoon riding ponies with her cousins:

Laura's screwed-up eyes opened, and below her she saw the grasses flowing back. She saw the pony's black mane blowing, and her hands clenched tight on it. She and the pony were going too fast but they were going like music and nothing could happen to her until the music stopped.

Seriously, after reading that, pony rides at the state fair just aren't going to cut it anymore.

3. All of the delicious, hearty, don't-worry-about-cholesterol-food

From fresh wild game like venison and rabbit to delicious baked goods liked sourdough bread and vanity cakes, the descriptions of the Ingalls' and Wilders' hearty pioneer meals are so realistic, my mouth still waters a little at the mere mention of the books. Even when times were lean for the family, they ate well, thanks to Pa's rifle skills and Ma's creativity. Growing up in a land of processed and frozen foods made the simple yet wholesome meals described in the Little House books - farm-raised or wild game meat, garden-grown vegetables, homemade cornbread - even more appealing. And I'm not the only who feels this way - The Little House Cookbook, published in 1979, tracked down over 100 recipes mentioned in the books, for ravenous readers to make at home.

Face it, Almanzo Wilder, with his slick buggy pulled by a team of rambunctious, wild Morgan colts was basically the frontier equivalent of a dude with a sweet sports car. During their courtship in These Happy Golden Years, Laura helps Almanzo break the team and teach them how to pull a buggy, much to the consternation of Pa and Ma Ingalls ("I do believe he wants to break your neck. I hope he breaks his own first," says Ma at one point in typical concerned mom fashion). Once the colts are trained, most of Laura and Almanzo's courtship takes place on long buggy and sleigh rides through the Dakota frontier. Sounds so much more pleasant than the modern dating scene, doesn't it?

5. Swimming in a swimming hole

Sure, going to the pool or the beach as a kid was always fun, but after I read On the Banks of Plum Creek, it paled in comparison to this:

Suddenly they came out of the high grass and the creek was there.It ran twinkling over white gravel into a wide pool, curved against a low bank where the grass was short. Tall willows stood up on the other side of the pool. Flat on the water lay a shimmery picture of those willows, with every green leaf fluttering.

As an adult, now having had the opportunity to swim in a creek, I can say from experience, it's definitely as much fun as I thought it would be, maybe even more so, since modern swimmers don't have to deal with this.

Forget star-studded concerts and flashy fireworks displays - a simple, old-fashioned Fourth of July celebration like the one Laura, Carrie and Pa attend in De Smet in Little Town on the Prairie always seemed like a far more fun way to celebrate Independence Day. Wilder's description of the town turning itself out for speeches, firecrackers and horse races evokes the spirit of the Wild West you just don't get from watching people do stuff like this.

Laura may have started out in the Little House series as something of a tomboy, but as she grew up, she developed more of an interest in the fashions of the day, leading to some very detailed dress descriptions:

They made a tight-fitting basque, pointed at the bottom back and front, lined with black cambric lining and boned with whalebones on every seam. It had a high collar of cashmere...Small round black buttons buttoned the basque straight down the front. The skirt just touched the floor all around. It fitted smoothly at the top, but was gored to fullness at the bottom. It was lined throughout with the cambric dress lining, and interlined with crinoline from the bottom to as high as Laura's shoes.

While I am certain I would not have been a fan of heavy long skirts and corsets (seeing as most days I can barely tolerate pants), the femininity and elegance of the clothes made me wish just a teensy bit that we could bring pioneer fashion back for like, one day a year.

The music played by Charles Ingalls on his trusty fiddle is so iconic and memorable, it has its own Facebook group, YouTube channel, and CD. Each book features several scenes of Pa playing a variety of songs, from solemn hymnals to rollicking folk tunes, but the one I always loved best was from By the Shores of Silver Lake, where the family spends their winter nights in the surveyor's house singing and dancing:

Unfortunately, no one else in my family thought it would be as much fun to turn off the TV and dance around the living room to fiddle music, so I spent my winter nights buried in the pages of a Little House book, dreaming of camping under the stars in Kansas or jigging in a little house in the Big Woods to the jaunty notes of Pa's fiddle.