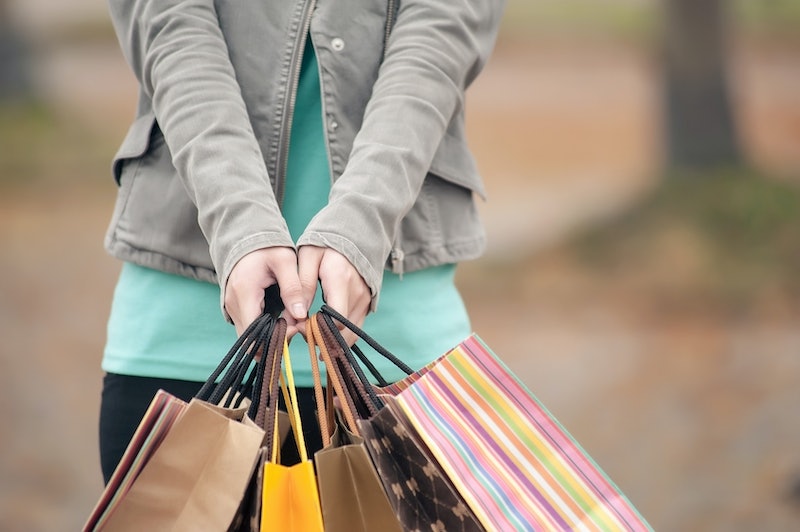 I’m not sure where impulsiveness comes from. Do we act impulsively because we’re scared of missing out? Or that if we don’t do something immediately, we’ll never have that opportunity again? Are we just sad, materialistic slaves to the consumer market and societal ideals? I'm actually asking; I have no idea. I took like one psych class in college and I got a C. So. Humans, you will always mystify me.

I feel like in the last 10 years, impulsiveness has become a desirable, trendy trait for a person to possess, probably stemming, at least in part, from the whole Manic Pixie Dream Girl fascination. At least so far as women have been told, a guy wants nothing more than for a girl to show up at his door with magically acquired tickets to go see Bob Dylan in San Francisco and the only way to get there is by taking her VW bus she bought like two hours ago because girl is ~*~sPoNtAnEoUs~*~.

Obviously, we only like this brash way of life in theory, because being impulsive can actually be a total problem. And I know this. Because I’m impulsive, and not in the cute way. More like in the "Oh shit, did I really spend $90 on nail polish this month alone?" way.

Impulsiveness can range from whimsical spontaneity (example: taking your boyfriend/girlfriend to a festival instead of going to the gym) to self-destructive impulsion (example: spending your entire savings account on a purse because you saw it at the mall and now you must have it or else life will become meaningless.) Spontaneity is multifaceted. It’s complex. It’s weird. If you’re not sure where you exist on the spectrum, here are some indications of your impulsive nature:

1. You go to Target for toilet paper only to come out with a new espresso machine

Target is a huge sinkhole of shit we don’t actually need. But we love Target because their products are better than average, and they are marketing geniuses. Target stuff is designed to appeal to 20- to 40-year-olds’ aesthetic tastes. And it's slightly affordable, which is always a bonus. For example, you’ll walk in to Target needing a towel but end up also buying cute paisley curtains for $19.99, a $15 pillow with an orange bird on it that says “dream,” and a mint Essie nail polish for nine bucks. Target preys on impulsive humans (and let’s face it, we all become impulsive at Target) because Target makes you believe you need things in order to fill various voids in your life. Do you though? Probably not.

2. You have at least 15 outfits you never wear because what were you thinking

You’ve impulsively purchased clothes more times than you’ve bought clothes out of necessity and now your dresser is a hot mess. Usually these items of clothes include: sparkly crop tops you thought would be so perfect for going out to the bars, bright green jeans you thought you could pull off if you really tried, or that one American Apparel dress that literally looks terrible on every body type but you bought it anyway because it was soo soft.

3. You have a regrettable tattoo. Or five.

Visions of tattoos sometimes come to us in epiphanies, and those epiphanies can be beautiful! Or tragic mistakes.

4. You have probably insulted someone before thinking about the repercussions

Usually this happens via e-mail or text, and it all goes down so fast that you only later realize you probably shouldn’t have called your boyfriend a “stupid life-wasting asshole” before you chilled out and thought about shit rationally and slowly.

5. You’ve walked out of a job before

It feels good to flip off The Man and leave your workplace totally screwed without you, but I guess it also feels very bad to be unemployed.

6. You switch up your hairstyle a few times a week

One morning you’ll decide you want bangs, so you grab scissors and start hacking at a clump of hair. The next day, you think how awesome it would be if you dyed your hair a really sassy red. By the end of the week, your hair is this nest of regret and straw, so you quickly book an appointment at the hair salon and tell her to “chop all of it!"

7. You always grab a magazine on your way out from the grocery store

Even though you know a subscription is like 10 times cheaper. Math. Psh. Who needs it?

8. You have banned yourself from going to Whole Foods

You cannot be stopped from grabbing three types of hummus, vegan pumpkin cookies you know you won’t actually eat, everything at their deli, and $14 ice-cream because what could $14 ice cream possibly taste like (whole milk and infinite happiness?)

Because Forever 21 is the Target of the clothing store realm.

Charcoal facial mask for $50? It must be good. Sampler size mascara? You should probably give it a whirl. Shampoo product that promises Zooey Deschanel hair? Get it in my cart NOW.

OK FINE. You basically can't be allowed into anywhere that sells anything because your brain becomes a cloudy din of "YOLO! YOLO! YOLO!" without a trace of self-control (or even self-awareness.) And pet stores definitely qualify. You have been known to at least think about impulsive buying actual living things. That’s your best friend for life behind that cage right there. #NewestMemberOfTheFamily!

“Eh, why not?” is something you have thought when someone has propositioned sex to you, even though you totally knew it was something you would deeply regret at some point. A moment of silence for all the impulsive things our sex parts have done on our behalves.

13. Your dinner plans go from grilled chicken to sushi within seconds

Mainly because grilled chicken is boring. Do you need another reason?

14. You had plans to go to the movies this weekend, but now you’re set on booking it across the country

15. You bought Rosetta Stone because it was on sale

I mean, you’ve always wanted to learn Italian. And when is Rosetta Stone not a million dollars? Never. You must seize this opportunity to become a more worldly person. Plus, now you will be able to go to Italian restaurants and order in their mother tongue. (Although it would help if you actually touched the Rosetta Stone once you get home, which you definitely do not do.)

16. When someone offers you drugs at a concert, you’re like why not?

Hey, it's probably not arsenic.

17. You’ve been known to deactivate your Facebook multiple times a month

Because you hate everyone right now. You need to concentrate on yourself and *do you* for awhile without the constant distraction of other peoples’ lives. As in, like... three days.

18. Or suddenly decide that half your FB pictures need to be untagged

You go through 1,800 photos and untag every single one that is slightly not Elite Model Management level.

19. You could be unbelievably in love with someone one day and break up with them the next

Because that is just how you roll, so get over it.