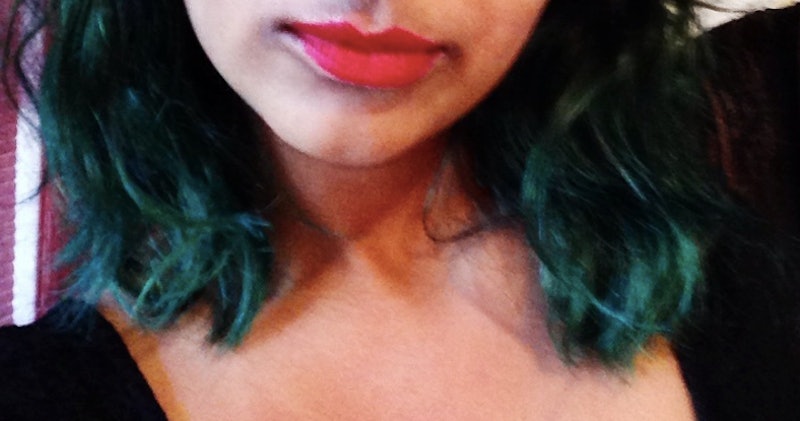 If you're a feminine-presenting queer person (specifically one of South Asian descent), and you want a place to tell your stories about the intersection of sex, sexuality, femininity, and race, head to Queer Ink today. The resource hub for LGBT and Hjra folks in India is calling for submissions, due on Wednesday, September 30, as a part of their Queer Femininity Project, which aims to promote a discussion surrounding the intersections of race, sexuality, and gender expression; specifically, femininity. As a queer, feminine-presenting Pakistani woman, I urge anyone with interest in submitting to do so — but not for reasons you might think. I'm not so interested in the growth of queer narratives in general, or the catharsis that may come from writing about such a personal journey. My motives are much more selfish.

My story begins when I was 6-years-old. I came home from school and asked my mom why my skin was dirtier than everyone else's and why my eyes, as explained to me by a fellow 6-year-old, were black like the devil's. My mom, burdened with the task of explaining the intricacies of race to a very young person, decided that the best answer would be a simple one. She responded, "Dirty? Who said anything about dirty? Your skin is golden. Like the color of sunsets and honeybees and rings. Your skin is perfect, better than anyone else's."

But I wasn't convinced, so I decided to take measures into my own hands. That night, I hopped into the shower, fully equipped with a loofah, two different kinds of soaps, shampoo and conditioner, and even toothpaste, ready to use all of these cleaning agents to scrub the brown off my skin. I stood under that hot shower stream for more than an hour, scrubbing and scrubbing until my fingertips softened and my elbows developed a rash. To my disappointment, there was no change. I was going to be brown forever. I was going to be different, disgusting, and weird forever.

Fast-forward about 10 years. I'm standing in a photography exhibit, looking at beautiful, silver-toned portraits of burlesque dancers in various settings and time periods. I stumble across a portrait of a woman, covered by nothing but two marijuana leaf pasties and a giant wreathe of sparkling feathers. Her lips were slightly parted, her eyes were full of enticing playfulness. I thought I had found love. I thought this woman, in all her essence and authority and, quite frankly, sexiness was the most beautiful human I had ever seen.

Within the next two months, I was out as a queer lady at school, dating my current lady, and excited to begin my life as a new person who was more in touch with her self and her surroundings. But life was not all peaches and cream — I was not out, as you have probably already guessed, to my family.

So I did what any young person in the Internet age would have done — I sought out resources to help me cope with the secrecy, newness, and complications that came with being queer. I read Autostraddle religiously, which taught me about the nuances of queer culture; I quickly started and finished The L Word, which allowed me to visually understand my new identity for the first time; I read articles analyzing Emily from Pretty Little Liars and started listening to music by Tegan and Sarah. Yes, some of the content I consumed was problematic, like the depiction of race in The L Word, for example. I knew that then and I know that now. But it was better than nothing. It was better than seeking queerness in heterosexual spaces, whether it was on television, in storybooks, or within my own friend groups. I worked with what I had.

But things at home started to get more and more rough as my mom begun to suspect my sexuality. I wanted to seek out a more intimate community, one with ties to more of my identities other than just "lesbian" or "queer" or "gay." I wanted a Pakistani community. I wanted someone else to understand the implications of my mother telling me my life was haram (sinful). I wanted someone else who spoke my language, who used Urdu words when English failed to describe the pains (and sometimes joys) of being a young, queer woman. I wanted so horribly to be a part of that community I was ashamed of when I was young...but, unfortunately, I knew that community would be ashamed of what I was now. So once again, I searched the internet for sources I lacked. Here's what I found:

Nothing. I didn't find anything. Autostraddle didn't have a single essay written by a queer Pakistani woman. The L Word didn't have a Pakistani, or even brown character. AfterEllen didn't have any Pakistani writers. Queer Ink wasn't culturally relevant or easy to find at that point. I felt like I was six years old again, out of resources, all alone, and unable to seek out support because it seemed that there was, quite literally, no one else like me.

It's been three years since I first Googled various iterations of "Pakistani lesbians" and, unsurprisingly, we haven't seen any sort of drastic increase in the representation of Pakistani or South Asian queer people in that time. Media and literature is still white and heterosexist, and therefore I continue to consume it for lack of better options — which goes back to my original plea: if you're queer and you're Pakistani, or desi, or South Asian, or brown identified and you're out there and you have the ability to produce something, even anonymously, for The Queer Femininity Project, do it. Not because it's your responsibility to educate anyone or make yourself known. Not because you must see a representation of yourself in the world to validate your own existence. Do it, if nothing else, for me, a 20-year old woman who has been out for three years and only has resources to understand her brown queerness and desi femininity from a white perspective. Or do it for you, as a way to add to the dialogue I've attempted to create here. Like I said, my motives are selfish — but what else can I do when the experience of my self is all I've got?