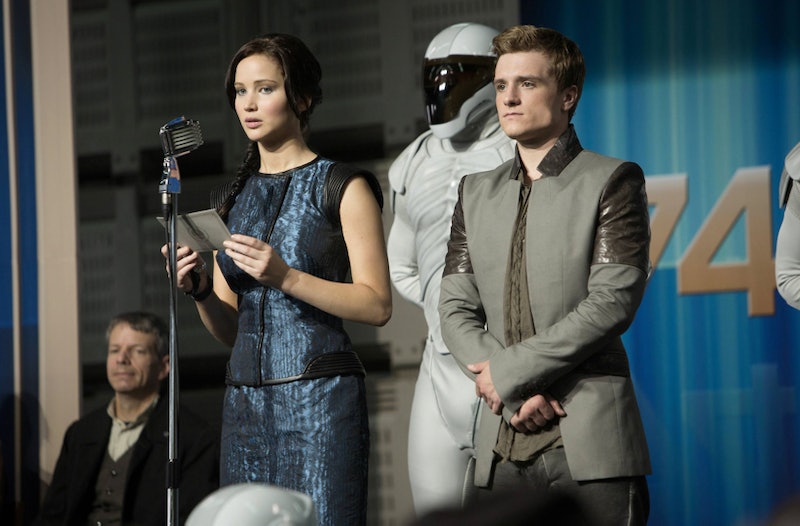 Come the month of October, Netflix will be a place of much splendor and glory. Gilmore Girls, of course, will be making its debut appearance on the streaming site on the first, and The Hunger Games: Catching Fire will follow suit on Oct 22. With The Hunger Games: Mockingjay, Part 1 hitting theaters almost exactly a month later on Nov. 21, it's only fitting to take this as an opportunity to look at some of the various things in Catching Fire that call ahead to the happenings in Mockingjay.

The books' internal narration has a lot more room to go into detail about the initial and long-mythed total destruction of District 13, but the movie finds a way to sneak a bit of that in, too. Watch out for it when Katniss if talking to President Snow in her Victor house at the beginning of the movie, and get ready for big, crucial chunks of the Mockingjay to take us right to the source.

We're gonna blur the lines of foreshadowing and plot set-up here, but whatever: Gale gets a very telling look on his face when Katniss reveals the Districts have started to rebel. Gale's been a revolutionary from the start, he just didn't have the power to start the revolution himself. Now that Katniss has helped spark one, we'll be seeing a lot more of Gale in the throws of warfare. Make note of the fact that the revelation led to Gale not agreeing to run away with Katniss to save their families; that thought focusing on the greater good over individual lives will follow through in a big way to Mockingjay's finale.

This foreshadows within Catching Fire itself — the revelation that Game Maker Plutarch Heavensbee was working for the rebel side — and into Mockingjay's very core. The Mockingjay symbol's key throughout all the books, but there's a reason the last book's named after it: This is the book (and now movie) when the symbol comes into full force, with Katniss embodying it in the revolution.

Katniss spends a lot of time in the beginnings of Mockingjay wrapped up in trauma and grief. This has to do with a lot of things of course — District 12, the sheer amount of bloodshed she's witnessed over the past two years, etc, Katniss is never a character ruled purely by some dude. But we get a glimpse at what Peeta really means to Katniss throughout some crucial moments in Catching Fire, especially when he crashes into the forcefield and when Katniss and Haymitch discuss that Peeta is more morally and thoroughly "good" than either of them after the announcements that past Victors would provide the pool for the current Games.

We learn in Catching Fire that (to the surprise of no one) President Snow got to where he is through some very strategic poisoning of the people who were standing in his way. This is important to Snow's storyline, of course — but it might be even more important to the narrative's relationship to politics as a whole. Mockingjay will throw into light a whole new side of leaders (led by District 13's President Coin), and questions of morality and the corruptive nature of politics are all at play alllllll throughout that.

We'll be seeing a lot more of the girl whose screams Finnick heard from the jabberjays when it comes to Mockingjay.

"I'll See You At Midnight"

Katniss and Peeta are very anxious about being separated in the midst of Catching Fire's climax. This is for very good reason, it turns out: We never see this version of Katniss and Peeta together again.

Bonus: Peeta's "I Don't Want Them To Change Me"

This is from the first movie, not the second, but this little speech he gives to Katniss on the roof before their first Games start?

I want to die as myself... I don't want them to change me in there. Turn me into some kind of monster that I'm not.

Yeah, that's completely crushingly heartbreaking when you take into account... well, everything the Capitol does to Peeta in between Catching Fire and Mockingjay. Images: Lionsgate