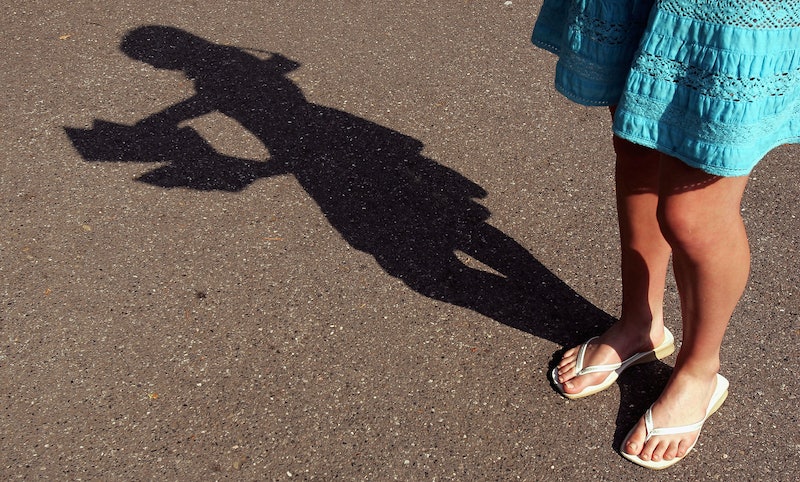 These days, it seems like hardly a week goes by without another dress code debacle, in which students (mostly women) are taken to task for violating restrictive and sexist rules. Some examples: Florida's Oakleaf High School made a student wear a "shame suit," while South Plaquemines High School in Louisiana sent a Rastafarian teen home because of his dreadlocks. Usually, I take great pleasure in seeing these schools get the smackdown, because it can mean revision of outdated policies. Usually, though, the school in question isn't my own high school. Last week, Maggie L. Walker Governor's School in Richmond, VA threatened to ban girls from wearing shorts entirely for a day — and the students protested in the best way imaginable.

According to Mairead Guy, a sophomore, this is what went down: without any prior warning or notification, a dress code announcement came on over the PA system one September day. In the announcement, the administration informed students that they would be performing a shorts-length spot check (MLWGS requires fingertip-length clothes), and any girls found to be in violation would be forced to change. Furthermore, if 10 girls broke the rule, all girls would be banned from wearing shorts for a day. Yes, you read that right. All girls, not just the ones who went against the dress code policy. No boys.

Here's the deal. I understand the implementation of a basic dress code (students should probably not be running around in the nude), and MLWGS' fingertip-length rule is not so bad. HOWEVER. Threatening to punish all female students for the infractions of a select few is misguided and unjust. Besides, dress codes are awfully subjective: shorts can ride up and look, well, shorter than they are, and longer-legged girls can find it nigh-on impossible to nab a pair of shorts that goes down that far. Such rules don't take naturally-occurring physical variation into account. Furthermore, preventing solely women from wearing shorts sends the message that every single one of them is responsible for breaking the rules. And are men incapable of wearing short shorts? Has Sacha Baren Cohen taught us nothing?

The student body was unsettled, said Guy: "I was in a club meeting [at the time of the announcement], and immediately I, and everyone else in the club, was shell-shocked and upset." They wanted to respond, but they didn't want to do so in an overtly aggressive manner. The best way to fight back, they decided, would be this: on a Thursday in late September, male students would wear shorts that barely skimmed the tops of their thighs, while female students would cover themselves in the most modest attire they could find.

The result? Hilarity, combined with a poignant take-down of the dress code double standard.

I am proud of my old high school for responding like this. The actions they took were tongue-in-cheek, yet thought-provoking; strong, yet non-violent and non-disruptive. And, what's more, they were effective. According to a senior who wished to remain anonymous, students received the following email from the director following the protest:

Fighting back against sexism that is embedded in officially-sanctioned structures such as dress codes is difficult, but these guys pulled it off with aplomb.

The school administration has not responded to a request for comment.

More like this
Chris Kaba's Family Continue Fight For Justice After Viewing Police Bodycam Footage
By Sophie McEvoy
Black History Month UK’s 2022 Theme Calls For Action, Not Words
By Maxine Harrison
15% Pledge Director LaToya Williams-Belfort On The Impact Of Supporting Black Business
By Dominique Norman
Mel B Speaks Out Against Domestic Violence In A Powerful Speech
By Sophie McEvoy
Get Even More From Bustle — Sign Up For The Newsletter