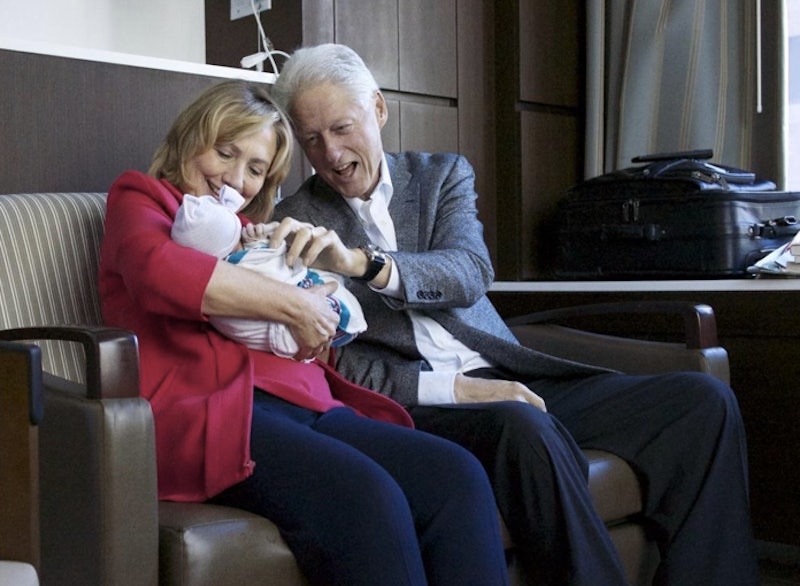 What's better than the Royal Baby? The Clinton Baby, obviously. Chelsea Clinton, daughter of Hillary Rodham and Bill, has given birth to a baby girl. After a morning of flurried Twitter announcements, we officially have the first images of Chelsea's daughter, Charlotte Clinton Mezvinsky.

Chelsea Clinton and her husband, Marc Mezvinsky, welcomed Charlotte into the world on Friday, Sept. 26. A Twitter announcement from the entire Clinton clan followed hours later. But on Saturday afternoon, Chelsea, Hillary and Bill finally posted what we've all been waiting to see: the baby pictures. Because, really, what's a birth announcement without photos?

Bill and Hillary also released a joint statement on Saturday, expressing their happiness and gratitude over the birth of their first grandchild:

We are thrilled to be with our daughter and her husband as they welcome their daughter into the world. Chelsea is well and glowing. Marc is bursting with pride. Charlotte’s life is off to a good start.

The former president of the United States added in a statement that little Charlotte's life was "off to a good start" and that his daughter is "well and glowing."

Without further adieu, meet Charlotte Clinton Mezvinsky, who's already giving Royal Baby No. 2 a run for her money...

The birth of her first grandchild has been a focal point for Hillary Clinton since she stepped out into the public eye earlier this year to promote her latest autobiography, Hard Choices. Whenever faced with the inevitable question — "Will you run in 2016?" — Hillary would emphasize that she's about to take on the new role of grandmother — the role she was most excited for.

In a June 2014 interview for People magazine, the former Secretary of State said:

I know I have a decision to make. But part of what I've been thinking about, is everything I'm interested in and everything I enjoy doing – and with the extra added joy of 'I'm about to become a grandmother,' I want to live in the moment. At the same time I am concerned about what I see happening in the country and in the world.

Later that summer, Hillary added to Charlie Rose in an interview for PBS that she wanted to experience being a grandmother. "I want to know what that feels like. I'm not going to skip over it," she said.