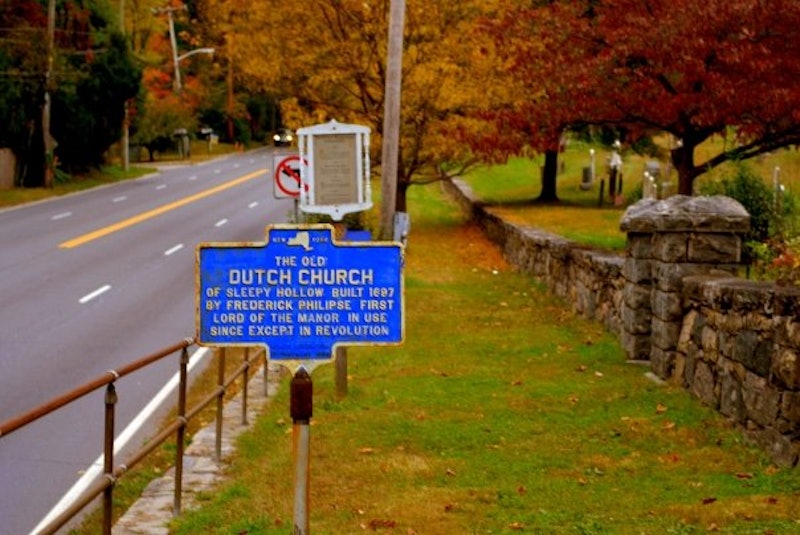 It's hard not to get hooked on Fox's resident spooky series about one of the America's most beloved stories "The Legend of Sleepy Hollow." But is there a real Headless Horseman legend inspiring Sleepy Hollow ? Well, it depends on how superstitious you are, though the real Sleepy Hollow and its neighboring Tarrytown (author Washington Irving's hometown) have some mighty creepy sites and history.

I was able to visit Tarrytown, NY and Sleepy Hollow Cemetery and peep my peepers on the totally spooky site of the Headless Horseman bridge — yes folks, there an actual historical landmark plaque marking the site of the bridge that Irving's infamous undead villain rode upon. Though tourists will often be shown bridges in the vicinity of the cemetery, the actual bridge as described by Irving has since disintegrated. Some turn of the century photos of the bridge exist, but currently, nothing but a simple sign marks what is officially regarded as its location.

The drive into Tarrytown, however, is straight out of a haunting tale. Rich foliage and solitary roads leading up to the Old Dutch Church suggest a certain sense of dread. A spooky sense of Classic Americana is conveyed through the old buildings and you suddenly understand why so many horror stories are set during the chillier months of an East Coast fall.

The bridge may get all of the glory, but the Old Dutch Church is not insignificant to the tale; neighboring locals will tell you of the area's rich Dutch settler heritage whose fables inspired Irving's stories. The Headless Horseman trope is native to several European mythologies since the Middle Ages, including the Irish and the Germans, with the headless horseman symbolizing the vanity of a bold soldier. Jonathon Kruk's book Legends and Lore of Sleepy Hollow details the existence of a real decapitated Hessian buried in the Old Dutch cemetery who may have been the inspiration for the legend and the story as well.

The Hudson River Valley Heritage website details some of the facts as well, pointing out that the character of Katrina was also probably based on a real woman named Eleanor buried in the same cemetery. So who was the Hessian and how did he die?

Legend states that in the Revolutionary era, he was stationed in Sleepy Hollow, who was decapitated by a cannonball. Prior to his death, he had saved a local boy from a fire, so the citizens chose to honor him burying him in the church yard. The soldier's body, however, was none too happy about losing his head, the story goes, so he would haunt the town searching for his missing top.

Whether you choose to believe the tale behind Legend, is up to you, yet to this day some still believe in the spooky energy of Tarrytown and its tormented spirits.