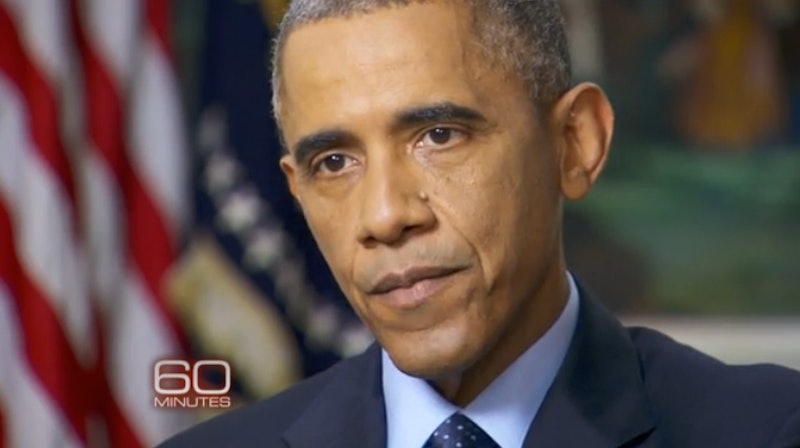 Since the American public's awareness first fixed on the rise of ISIS in the Middle East, there's been an enormous amount of discussion about how exactly it all played out this way. Specifically, whether the U.S. lacked the readiness or urgency to recognize the so-called Islamic State when it could've been more easily diffused. Well, now there's an official answer: in an interview with 60 Minutes' Steve Kroft Sunday night, President Obama admitted the U.S. underestimated ISIS' rise out of the Syrian Civil War, and didn't adequately anticipate how quick and effective its spread would be.

Obama's admission actually went slightly beyond that, identifying another critical flaw in the expectations of American intelligence agencies — they believed that the Iraqi military would be more capable in fending off the Islamic militant group. Of course, it wouldn't be a presidential admission of misjudgment without some subtle shifting around of the blame — Obama specifically referenced failures already admitted to by James Clapper, the U.S. Director of National Intelligence. Basically, in a war of "who has to take the heat over this," Obama would prefer it be Clapper, and for now at least, he's taking on that burden.

Jim Clappper has acknowledged that I think they underestimated what had been taking place in Syria. ... Essentially what happened with ISIL was that you had with al Qaeda in Iraq, which was a vicious group, but our Marines were able to quash with the help of Sunni tribes. They went back underground, but over the past couple of years, during the chaos of the Syrian civil war, where essentially you had huge swaths of the country that are completely ungoverned, they were able to reconstitute themselves and take advantage of that chaos.

The broad strokes of Obama's remarks track pretty closely with the things Clapper specifically conceded last week, according to the Washington Post.

Obama also mentioned the presence of ex-Saddam Hussein loyalist soldiers within ISIS' ranks, which he said contributed some "traditional military capacity," according to CBS News. The extent to which ISIS has capitalized off of traditional military targets throughout their sweep across Iraq has been considerable — back in June, they seized hundreds of Humvees left by the U.S. to the Iraqi military, and even rolled out a mocking hashtag to go along with the theft, #BringBackOurHumvees.

It'll be interesting to see if there's any pushback from the U.S. intelligence community about Obama emphasizing Clapper's oversights, following the interview's broadcast Sunday night. It's not uncommon for U.S. intelligence to clash with other agencies, even against other branches of government, the enormous scandal of the CIA's admitted spying on the Senate Intelligence Committee, for example. For the time being, however, Obama's rhetorical and strategic focus seems to be on finding a way to thwart ISIS without the use of ground troops like he initially pledged — the U.S. expanded airstrikes into Syria over the last week.

More like this
How To Follow The New Royal Family Social Media Accounts
By Sam Ramsden
Here's Who's *Really* In Charge Of The Royal Family
By Savannah Walsh and Meguire Hennes
Kate Middleton & Prince William Were Booed & Mocked On Their U.S. Visit
By Jake Viswanath
Here's The Role Lady Susan Hussey Played At Buckingham Palace
By El Hunt
Get Even More From Bustle — Sign Up For The Newsletter