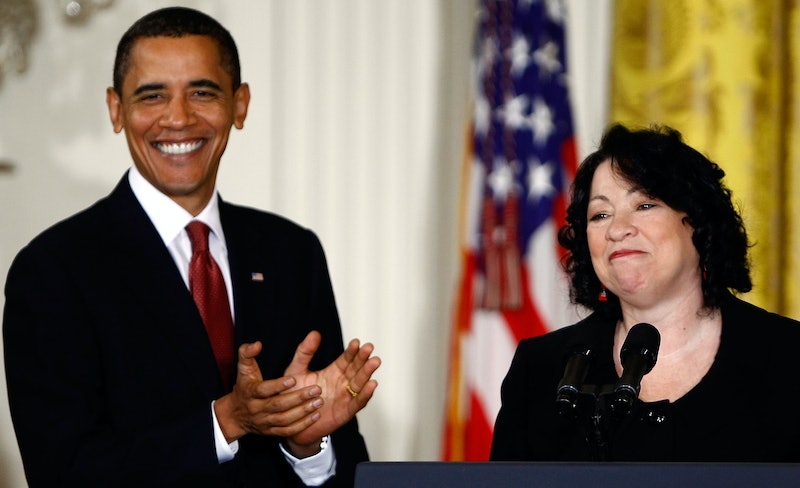 This year's high-profile appointments of National Security Advisor Susan Rice and UN Ambassador Samantha Powers year may have you under the illusion that women are making major gains within the Obama administration. Not so fast, says the New York Times .

Women currently occupy eight seats in Obama's cabinet, though the president has appointed a total of 13 women throughout his two terms. Departments led by women include the Departments of the Interior, Commerce, and Homeland Security. Obama's number, as the Times points out, is no higher than the number of women appointed by Bill Clinton during his two terms. Considering the progress that women have made in so many other areas of power in the last twenty years, the fact that this number has remained stagnant is not insignificant.

Obama may soon have another opportunity to improve women's representation in the executive branch, however. He has narrowed the pool of candidates for the open seat left by Ben Bernanke for Chairman of the Federal Reserve down to three, a number that includes Janet L. Yellen, the former Vice-Chair. If chosen, Yellen would be the first ever Chair(wo)man in the Federal Reserve's history. The Times also points out Obama's strong record of appointing female judges, including his two Supreme Court picks, Sonia Sotomayor and Elena Kagan.

When last year's "War on Women" debate briefly dominated the discussion surrounding the 2012 presidential election, Obama tried to paint himself as the pro-women candidate (of course Mitt "Binders-full-of-women" Romney didn't make that job too hard). Obama has frequently touted the fact that the Lilly Ledbetter Fair Pay Act was the first bill he signed as President — though his White House has also raised eyebrows by paying its male staffers much more than the women.

Aware of criticisms about the lack of women in the executive branch, Obama promised at the beginning of his second term, "We’re not going backwards, we’re going forward.” At least he's doing better than his predecessor George W. Bush, who had allotted just 24 percent of his top positions to women at the equivalent point in his presidency.