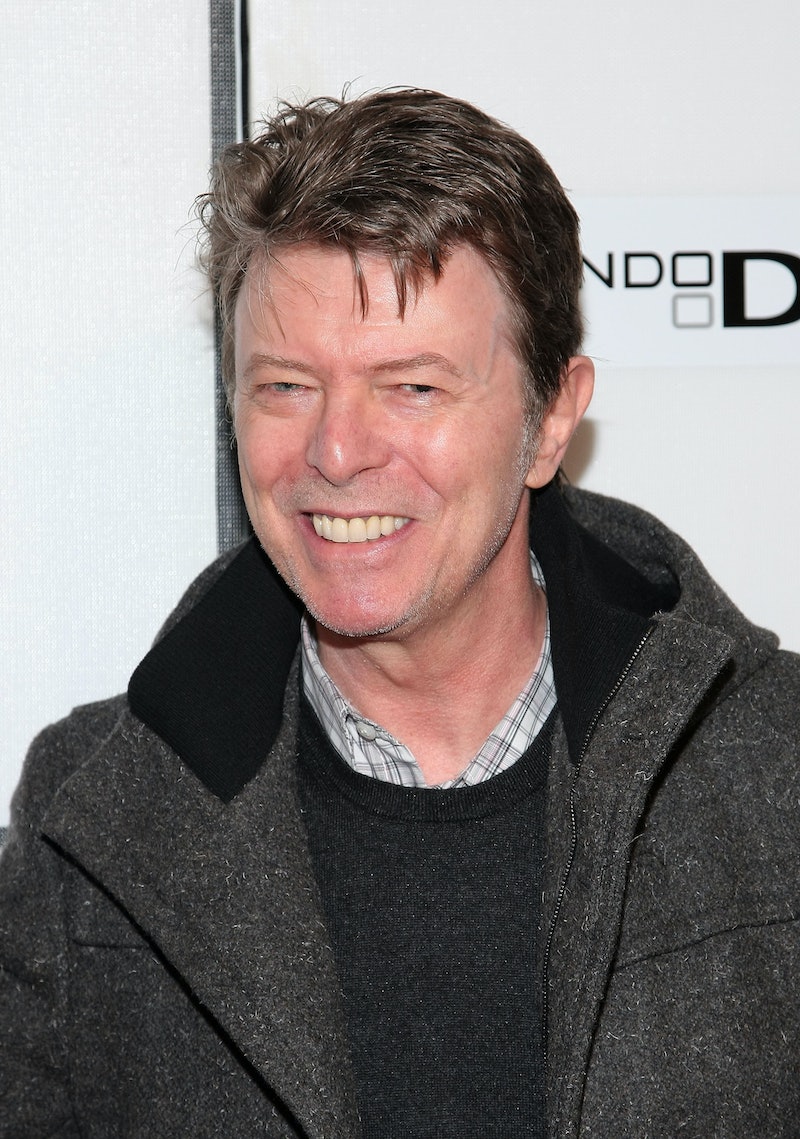 David Bowie is the greatest. You can try to tell me that he isn't, but I won't listen to you. He has evolved along with the times, finding inspiration in everything around him, and he has taken risks that have sometimes not paid off (that time he got really into drum and bass) and sometimes have been career defining (Ziggy, guys, Ziggy). He knows all about pop hooks, rock sensibility, and how to create a persona that lures fans closer while keeper your real self safely protected from the masses. Right now, David Bowie could be eating a bowl of cereal, but if someone were to tell us that he was standing in the center of a white room totally naked and screaming, we would be just as likely to believe it: He is the master of self-spin.

Admittedly, I am totally biased. David Bowie has always been my guy. I have loved him longer than I've loved any other dude. My heart has been broken, and Bowie is still there insisting that I put on my red shoes and dance the blues. As a real Bowie fan, I can chart the major moments of life according to the albums of his that have acted as soundtrack. In short, I am a Bowie nerd.

But I'd argue, that if we all thought long enough and hard enough about it, we're all Bowie nerds. In the world according to Bowie, there is something for everyone. I don't care if you hate glam rock, Bowie is more than glam rock. Allow me to elucidate things for you. Here are 15 times David Bowie was the greatest. Get going, mama-poppas!

1. Any Time He Was Ziggy Stardust

Bowie had been around loooong before The Rise and Fall of Ziggy Stardust and The Spiders From Mars dominated the rock scene in 1972 (his first album dropped in 1967). But there's no denying that the persona of Ziggy, an alien come to preach us wayward teens at the end of days, blew him up into the icon he would eventually become. No other person can brazenly insist that they are an alligator and inspire such fan fervor.

2. When He Was Aladdin Sane

While Madonna is popularly known as the mistress of reinvention, that title rightfully belongs to Bowie, whose personas changed from album to album. Even if you can't name a track off this album (shame on you) the image itself is legendary. Excuse me, I must pour some molten silver into my clavicle. BRB.

BEEEEEEEERRRRRLLLIIIIIN! Okay, I'm back. Remember when Iggy Pop and David Bowie fled the states and tried to kick their drug habits abroad? And how David did what he does best, picking up a bit of Iggy was throwing down style-wise and making it his own? And then remember when he wrote "Heroes" and it still makes our guts turn to triumphant jelly every time we hear it? That.

4. When He Made Eyepatches Awesome

Me, Just The Other Day: Man, I like, I just really want to wear an eyepatch.

Me: I think it would be cool.

My Friend: You think tragically losing half your sight would be cool?

My Friend: That is not an argument.

Me: OR IS IT THE ONLY ARGUMENT?!

5. When He Fell to Earth

David Bowie is a gifted actor. If you haven't seen The Man Who Fell to Earth, get on that shit – it's on Netflix, yo. I could rave about the film for hours and how its representative of surrealistic '70s filmmaking, or I just share this GIF of David Bowie tweaking his own nipples and tell you that you also get to see his penis in this one.

6. When He Twirled on This Chair

David Bowie doesn't care what you think of him. He is living large, in a jumpsuit, and twirling around on a chair giving none of the fucks. May this be a lesson to us all.

7. When He Took a Page From Hamlet

David Bowie is the ultimate showman. There are very few (arguably, no other) people who could quietly and sincerely sing to a skull. He does it with such natural aplomb that you can almost get behind believing that this is just how he spends his days. Wake up, say good morning to the skull. Drink coffee, pour some coffee on the skull. Go for a jog, drag the skull behind you on a string. You know, normal stuff.

8. When He Moved The Stars For No One

I don't know how old I was when I saw The Labyrinth for the first time, but I do remember I was old enough to get a strange feeling in my lady-parts every time this long-wigged, cod-piece wearing, resplendent in eyeshadow villain came onto the screen. Sarah should have been all, "Fuck Toby, this dude is HAWT"

9. When He Got His Fairytale Ending

I defy you to go and find a photo of David Bowie and his wife the supermodel Iman where either one of them looks unhappy. It can't be done. They are ridiculously glowy when they are in each other's presence. It should make me feel vomitous, but I can never rally to full puke-levels. They are just too damn cute.

10. When He Kept It Together While Falling Apart

Even when mired in drug addiction and battling other personal demons, Bowie kept creating. He was one of the first ever white artists to perform on Soul Train, he discovered Luther Vandross, he made saxophone playing cool waaaaay before Bill Clinton did. AND he kicked addiction in the asshole.

Rumors of sex with Jagger (courtesy of Bowie's then-wife Angie) flew fast and rampant. Did Bowie care? Not a whit. Instead in the '80s he was all, "Mick, let's cover "Dancing in The Street" while I wear a floral print jumpsuit!" And then they did, and it was terrible, but also absolutely great.

Remember when David Bowie was just casually hanging out with Paul McCartney and they were both so happy that it inspired the creation of this, the greatest GIF in the world? Yup yup yup.

13. When He Judged That Walk-Off

Bowie takes music seriously, and acting seriously, but he doesn't take himself that seriously. Remember when he made a cameo in Zoolander and judged the walk-off between Derek and Hansel? It was glorious. Almost as glorious as his hair during this era.

Then there was that time when Bowie managed to make Ringo Starr look like a creepy, hanger-on. Let me repeat that in case I wasn't clear: He made the drummer of The Beatles look like a scruffy, out of place, derelict. Boom.

14. When He Won The Internet

One of the best Tumblr accounts on the planet is Tilda Stardust, a blog dedicated to the theory that actress Tilda Swinton and Bowie are actually the same person. For his latest album, Bowie broke the internet by inviting Tilda to co-star with him as his wife. The internet dropped to the floor and died. You win this round, Bowie.

15. When He Told Us Just to Shut Our Mouths