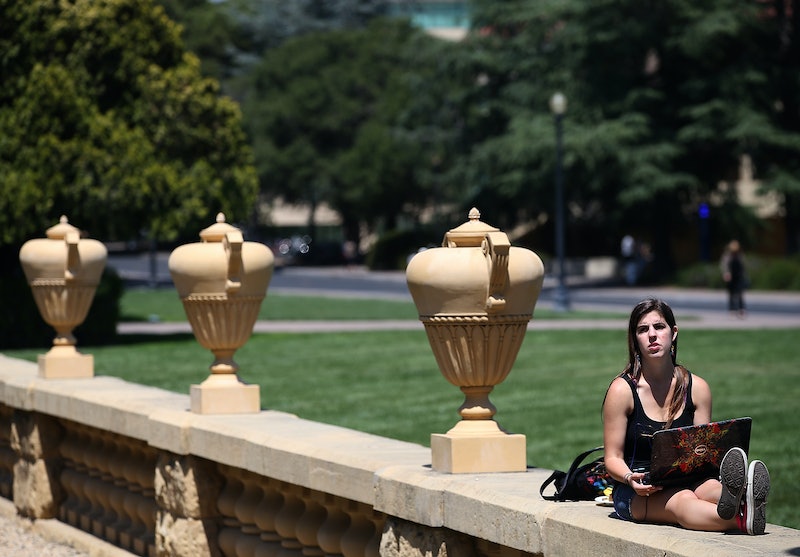 California Gov. Jerry Brown announced on Sunday that he'd signed first-of-its-kind legislation to redefine the way that college campuses in the state investigate sexual assault cases. The bill, which received bipartisan support, requires that California college campuses adopt a "yes means yes" policy when handling rape allegations. In other words, not saying no is no longer a viable defense in California sexual assault investigations — and you can expect the policy to travel farther than California.

Under the bill, California colleges and universities must adopt a "yes means yes" policy to continue receiving state funding. The language, adopted from recommendations from the White House sexual assault task force, means that silence or lack or resistance is not a form of consent.

It Goes Further Than The Golden State

With the White House calling for reform in the campus rape epidemic, universities have been looking for an update to the antiquated "no means no" approach that has been parroted to college students for years. In the last year Maryland, Texas, and Connecticut have also introduced bills designed to push college campuses for change, but California is the first to put this framework into place.

This legislation is maybe the most concrete reform that we've seen to sexual assault policies since the Obama administration got involved. Still, it isn't without critics: Some say that the sexual assault bill puts too much of the burden of responsibility on the victim.

The White House task force was integral to ensuring the administration recognizes this obvious problem, but it will take action from individual states before we start seeing real change.

California Has Set A Precedent

By writing affirmative consent language into its universities' policies, California is setting a precedent. Brown said in a statement:

The State of California will not allow schools to sweep rape cases under the rug. We've shifted the conversation regarding sexual assault to one of prevention, justice, and healing.

The law goes beyond mere suggestion. It offers real, clear incentive for the schools to put these new policies into effect. In a time when universities are struggling to fix a problem that has manifested with little intervention for years, such decisive action from a powerful state legislature can provide a blueprint for much-needed widespread action.

More like this
What The Lionesses’ Win Really Means For The Future Of Football
By Angelina Kelly
'The Capture' Is Finally Back – & S2 Looks Tense AF
By Sophie McEvoy and El Hunt
The Lionesses Are Calling For Equal Access To Football In Schools
By Sophie McEvoy
Gassed Up Promises All Things Action, Risk, & Redemption
By Frances Stewart
Get Even More From Bustle — Sign Up For The Newsletter