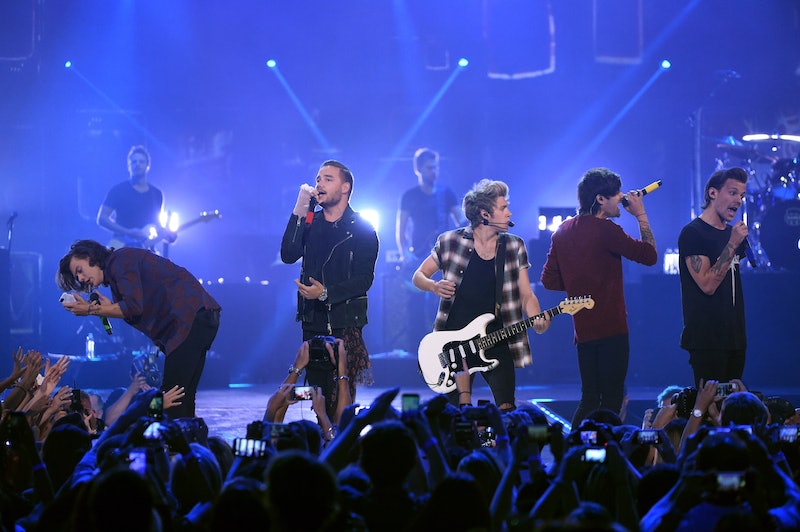 One Direction have been caught stealing... and not just the hearts of their fans all over the world! (Listen, no one is sorrier about that joke than I am right now.) One Direction's single "Steal My Girl" has officially dropped, and the song's troublesome lyrics about ownership of a woman ("Everybody wanna steal my girl/Everybody wanna take her heart away/Couple billion in the whole wide world/Find another one, 'cause she belongs to me") isn't the only crime being committed. The fellas of One Direction have now joined the long list of artists who have made songs about stealing, both literally and figurative. So where does 1D rank in the pantheon of "stealing" songs?

Well, the pop group makes it pretty clear that the titular girl in "Steal My Girl" has been "the girl" since the age of 16, that her family is like his family (a collective his, I guess?), and while guys all over the world may be pining over her, that's just too bad for them. Now, as catchy as this song may be (and, oh, is it ever catchy), the sentiment doesn't go down as easy as the beat. 1D sings that they simply don't exist without this head-turning girl, so no one else can have her. That's kinda her call, dudes. Take a listen to "Steal My Girl" here:

As far as musical crimes against feminism go, "Steal My Girl" doesn't even come close to being as harmful as say, "Blurred Lines," but it does still commit the old "steal"-ing problem. Here are some other tunes about various forms of thievery, and the extent of their crimes.

"Steal My Sunshine" by Len

Don't be fooled by the pep this poppy one hit wonder, if these guys actually went through with stealing the sun, we'd all be doomed. Doomed!

"Steal My Kisses" by Ben Harper

Stolen kisses are certainly less dramatic than stolen hearts, but we should all just frown upon all forms of romantic stealing.

"Stealing My Heart" by The Rolling Stones

"We had a good time/ Then it was sorrow/ I call it stealing/ You call it borrow." Can you get your heart back? Stolen hearts tend to be non-refundable from the guilty party.

"Been Caught Stealing" by Jane's Addiction

Perhaps the song most associated with stealing, probably because of lyrics like "I enjoy stealing/ It's just as simple as that/ Well, it's just a simple fact/ When I want something/ I don't want to pay for it." Yep, this is basically the theme song to shoplifting.

"Steal Away" by Etta James

This song works as a handy reminder: always be aware of your surroundings when something has been stolen from you, your heart or anything else.

"Dancing on, do the boogie all night long/ Stoned in paradise/ Shouldn't talk about it." Stealing or no stealing, the real crime here is use of the word "boogie."