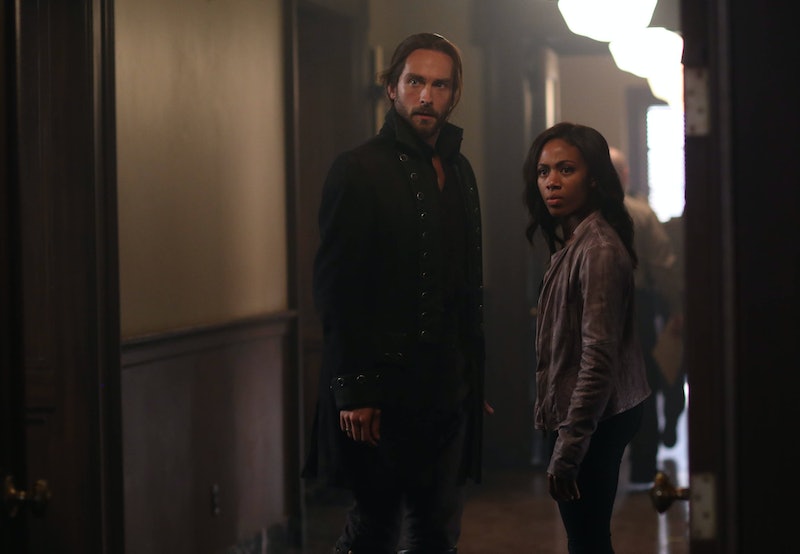 This show sure does know how to treat us like rubber bands. One second, Ichabod and Abbie on Sleepy Hollow are totally platonic because he has a wife and don't you even ask. Then, Ichabod is vowing to rescue Abbie and giving her the least platonic hug ever — and I'm an expert in televised non-platonic hugs. Now, in its sophomore season's second episode "The Kindred" Sleepy Hollow is upping the Ichabbie 'shipping, one carefully-placed line at a time.

In Monday's episode, Katrina is unfortunately still being held captive by her ex Abraham— the one who just so happens to be headless, unless Katrina is wearing the creepy necklace that makes his head appear. And since she clearly wants nothing to do with him, the headless asshole has to convince her somehow: by breaking her heart. Abraham tells her that Ichabod ditched him and that Ichie is now planning to ditch her for Abbie. His proof is a vision in his own head — and something we've been playing over and over in our heads since the end of Season 1 — of Ichabod promising Abbie he'd return to purgatory for her. We all remember how long that embrace went on and how tender it was. Shut up, naysayers. That thing was tender as hell.

Of course, we all know that Ichabod isn't giving up on Katrina just yet. He's a good guy and Katrina is in trouble. But there's something in Katrina's eyes that says she knows there is a connection between Ichabod and Abbie and she knows that. (She later says she wanted Abraham all along and not Ichabod, but I'm pretty sure that's just an espionage technique.) It will probably still take eons for that connection to ever turn into anything. But man, do those writers know we like a taste here and there.

All of us, after that mini-flashback (admit it):

After Katrina's worry becomes visible, Ichabbie later have a conversation that makes that connection even clearer. Abbie talks about how in purgatory, the vision of Ichabod made her so happy she almost drank water from him even though she knew she shouldn't. "My faith in you is my greatest weakness," she said and they did that staring into each other's eyes thing that they constantly do. "That's what they want you to believe," says Ichabod before seeing his own. "Do you think Katrina is my weakness?" he asks. ("Yes," we all groan, because the subject has been changed from their maybe-romance once again.)

All this being said, what's great about Ichabod and Abbie is the way in which they work together when their potentially romantic connection isn't being teased. Theirs is a relationship built on pure, unadulterated friendship and while I'm guilty of often wanting all hot people to hook up on my TV right NOW PLEASE, I have to admit, I was obsessed with these two kick ass heroes long before their names were smushed together for 'shipping purposes towards the end of Season 1.