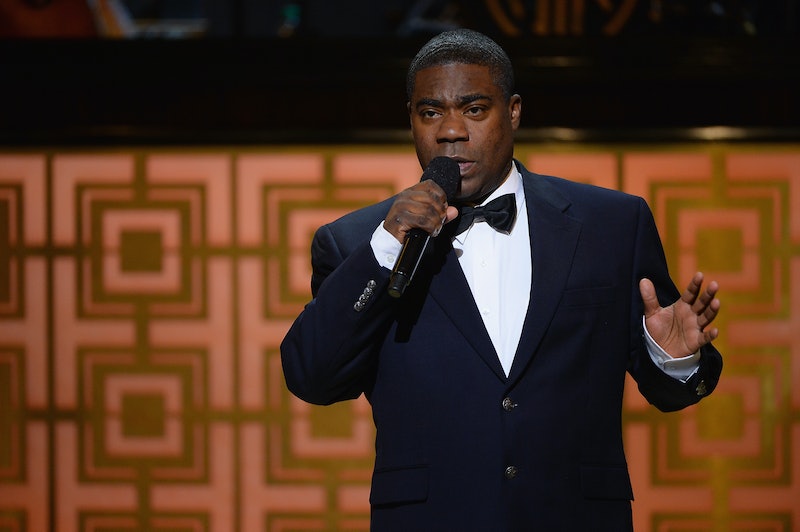 Tracy Morgan has been out of the hospital and on his feet for some time now following Morgan's deadly car crash with a Walmart truck driver. His road to recovery has been slow and difficult, but he has been doing as well as can be expected considering the circumstances. He has also been in the center of a lawsuit. As one would expect, he is suing Walmart for what his suit claims is the criminal negligence of having a fatigued driver transporting its goods. Morgan's suit also went on to claim that the driver had not slept for over 24 hours prior to the crash and that is one of the contributing factors. Walmart has filed a response of its own and it's a little disappointing. According to its defense, Morgan is at fault for his injuries in the crash for not wearing a sealtbelt.

The Hollywood Reporter quotes Walmart as saying Morgan's injuries "were caused, in whole or in part, by plaintiffs' failure to properly wear an appropriate available seatbelt restraint device. By failing to exercise ordinary care in making use of available seatbelts, upon information and belief, plaintiffs acted unreasonably and in disregard of plaintiffs' own best interests." This was only one of many defenses that Walmart made on its behalf in response to the suit, but it was certainly the most eyebrow-raising.

To be fair, this entire suit is a difficult claim to really defend against. All the details that were released about the crash from various claims and lawsuits made it seem more and more like Walmart should be held accountable for it, blaming them for creating the environment that led the truck driver to be operating a vehicle allegedly without a day's sleep beforehand. Proving that it is not at fault is an uphill battle for Walmart. However, in a case like this, why does it need to prove it's not at fault let alone blame any part of the incident on the victim? Morgan's hospital recovery was widely publicized and even occasionally sensationalized (the rumor that Morgan needed to have his leg amputated, anyone?) and it seems like the suffering caused by the crash should be clear enough to simply settle the suit out of court instead of claiming any innocence in the situation.

Then again, it's not as if Walmart could dispute who was at fault in the crash itself. At least, not yet. According to The Hollywood Reporter, it was unable to "admit or deny" any of the other allegations about the crash due to an ongoing investigation from the National Transportation Safety Board, leaving them able to only freely defend against being directly responsible for Morgan's injuries. And, technically speaking, it has a point. There’s a reason why it’s against the law to not wear a seatbelt and it’s quite likely that Morgan’s injuries would not have been as severe as they were had he been wearing one.

However, that doesn’t change the likelihood that he still would have been critically injured in the crash caused by a negligent Walmart driver, seatbelt or no seatbelt, and the blame for those injuries can’t be shifted to him just because he wasn’t buckled up. And considering the work that Morgan missed out on, and continues to miss out on as he recovers, he’s more than entitled to compensation.