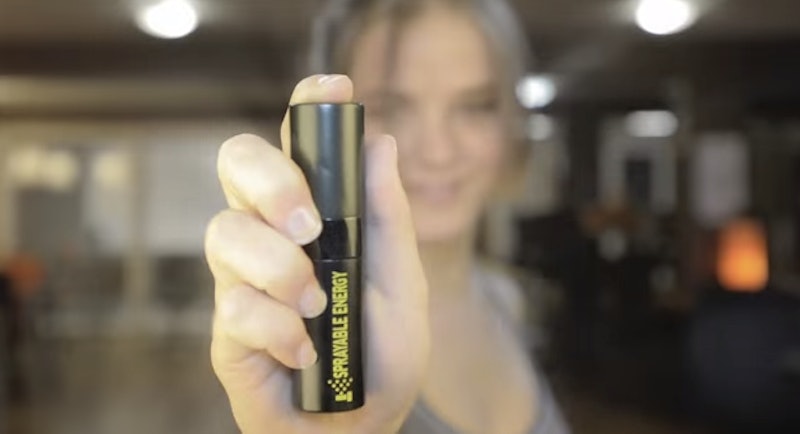 Attention hopeless caffeine addicts who are looking for an alternative to energy drinks/coffee: I have great news. We now live in a world where "Sprayable Energy," a.k.a. spray-on caffeine you apply to your skin, is a real thing. But, like all too-good-to-be true products, one can't help but wonder: does it actually work?

According to The Atlantic, Sprayable Energy — or liquid caffeine you spray directly on to your neck — is the brainchild of Deven Soni, a venture capitalist, and Ben Yu, a Harvard undergrad. They came up with the concept while studying at Harvard because, like many college students, they needed a constant source of energy. Soni notes in a video for their Indiegogo campaign that they were both tired of the negative effects brought on by energy drinks and coffee, and wanted to create some sort of alternative. "We both struggled with caffeine sensitivity and looked at most energy products like an unpleasant necessity. We wanted to make something for people who don't love everything about energy drinks," he said.

After partnering with a technical adviser and perfecting/testing their formula, they launched an Indiegogo campaign to raise funds for production. Finally, after raising over $160,000 (their goal was $15,000), they started shipping out packages late last year. Now, for the low, low price of $15, you can have your own bottle of Sprayable Energy.

So how exactly does it work? According to the product's website, you simply spray it four times (on either your neck or your wrists) to feel the effects of a cup of coffee. Apparently their formula, or "secret sauce" as they call it, was designed to allow caffeine to be absorbed through the skin. The site also claims that the product doesn't have the same negative effects as coffee and energy drinks — like crashing after use.

Take a look at the their original Indiegogo campaign video:

Seems way too good to be true, amiright?

As with all too-good-to-be-true products, one can't help but ask: "yeah, but what's the catch?!" According to the folks over at Business Insider, Sprayable Energy isn't all it's cracked up to be. Several members of their staff decided to try it out, and came to the the general consensus that it's not as effective as coffee. One woman even became "itchy" after using it. Check out their reactions:

Whether Sprayable Energy is just placebo, or is soon to put Starbucks out of business, you have to admit, it's a pretty intriguing product. I'm curious to see what the future holds for sprayable, liquid caffeine.