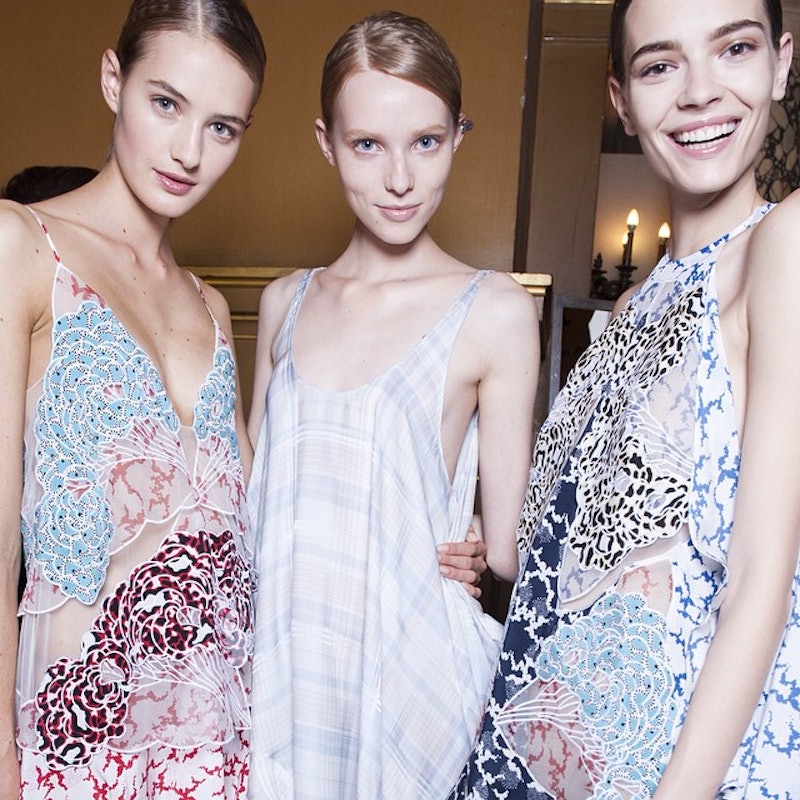 ICYMI (but how could you have?): the '90s are back and better than ever on the Spring 2015 runways. One trend you probably thought you'd never see again is making a comeback and no, I'm not talking about frosted lipstick. I'm talking about crimped hair, as seen on the Stella McCartney runway!

Lead hair stylist Eugene Souleiman sought to create a more interesting variation on the ponytail to highlight the laid-back vibes of Stella McCartney's fantastic S/S 2015 collection. He succeeded by channeling "a little bit of good-bad taste," according to Vogue, and crimping strands of the models' hair to add some texture to slicked back low ponys. But the 2014 version of crimping looks somewhat different than the time you fried your locks with a crimper back in middle school (what, just me?).

Now, we don't normally equate crimped strands with simplicity, but the hair look at Stella McCartney was certainly understated, a cross between polished and "total bed head." Err on the side of caution if you're copying this at home. Here's a photo from backstage at Stella to use as your guide. Happy crimping!

More like this
The Best Beauty Looks Spotted At Paris Couture Week 2023
By Audrey Noble
The Official New York Fashion Week February 2023 Schedule Is Here
By Dominique Norman
Twitter Memed Doja Cat's Red Schiaparelli Look & I Am Cackling
By Dominique Norman and Kelsey Stiegman
Kylie Jenner Wore A Stunning Corset Dress For Paris Couture Week
By Dominique Norman
Get Even More From Bustle — Sign Up For The Newsletter
From hair trends to relationship advice, our daily newsletter has everything you need to sound like a person who’s on TikTok, even if you aren’t.