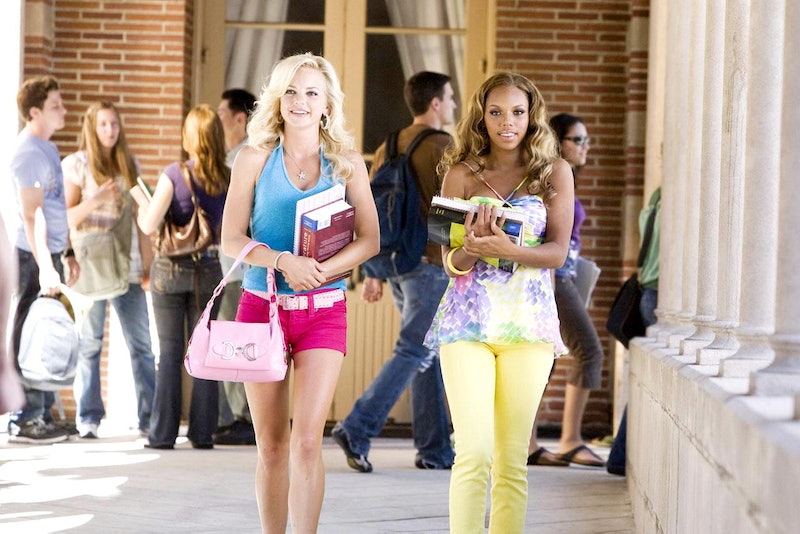 Movies give non-Americans a very distinct idea about what going to college in America must be like. As an Australian person, I grew up watching a lot of American movies, many of them representing college life, which always seemed to be a chaotic mess of over-drinking, nudity, sex and bullying. Living in New York now and knowing many people who attended college all over the country, I know it to be a generally very disparate experience to the one depicted in movies. Which is lucky for people attending college here, because the movies make it look like an absolutely terrifying experience in which you're likely to choke on your own vomit, get many STDs and potentially be tricked into eating something disgusting, probably like pubes or semen.

In the movies, college is vastly a place in which dude bros do their dude bro thing, sorority girls bitch out non-sorority girls, everyone drinks out of those big red plastic cups and every party looks like an overcrowded beach in Ibiza, but in a multi-story house with many rooms which are constantly being used for random fornication. Okay, maybe Good Will Hunting isn't exactly like that, but that's the exception, not the rule. Intellectual dramas aside, here's how the movies make college in America look to Non-Americans.

Sororities and Fraternities Are Terrible

Apparently, if you want to find the most vile types of women on earth, you go to a sorority or a fraternity. The girls are bitchy and conniving and the dudes are drunk and rapey. Everything that's done in a sorority or a frat in the movies is done in a mean spirit, or while everyone is playing some sort of drinking game that renders them so drunk they can't even remember their own first name. From Van Wilder, to The House Bunny to, most recently, Neighbors, there are a lot of inappropriately blurred lines when it comes to existing within or interacting with a movie sorority or frat, and a lot of anachronistic expectations of what sort of person you should be if you want to be included. From everything I've heard in the news, and everyone who's given me a first-hand account of what actually goes on in sororities and fraternities, the movies are going pretty easy on the lifestyle. Yeah, reality seems much, much worse in this case.

What is it about a mix of brains and beauty that equals asshole in the movies? Legally Blonde has the mean and pretty game on lock, with everyone from Elle's boyfriend to the girls in her sorority acting like total good-looking jerks (but Elle's got the sassy, snappy come back game to rival any shadiness thrown at her). The thing about being smart in real life is that your common sense generally serves to stop you from being an asshole to other people. Not so in college movies. P.S. Here's a bonus Elle Woods ultimate bitch take down gif:

Everyone Drinks Too Much All The Time

Take high school, add near constant sex, gratuitous use of liquor and drugs, the shirking of responsibilities, keep the bullying and the social hierarchies and hey presto, that's college! The movies make college seem like it's mostly full of awful people making terrible decisions, like an extended Spring Break. I should mention, however, that despite (because of?) all of these points, some of my favorite movies are American college movies. The surreal-ness of American college movies is what's so appealing about them; obviously no one wants to go see a movie about someone alternately studying and sleeping while simultaneously not showering for days on end. Besides, you know what they say…"There's a time and a place for everything… it's called college!"