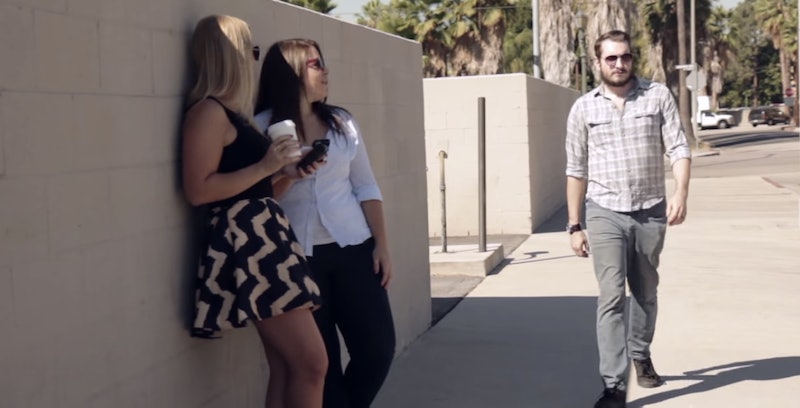 Buzzfeed has come out with some really great parody videos lately. Their “If Asians Said The Stuff White People Say” and subsequent videos flipped the script on common microaggressions that people of color deal with from white people every day. So when I saw the “If Women Catcalled Men” video, I expected a role-reversal that got across a point about street harassment while still being funny.

However, BuzzFeed missed the chance to make the point their previous parody videos made. Street harassment is about exerting power and control, not dating. I’m certain the man who overheard my friends and I discussing meal plans and offered us his “sausage” didn’t really think we would give him our numbers. Men who catcall women are doing no more than letting women know that they have the right to judge and comment on their bodies and appearance. When street harassment gets physical, violent, and deadly, it’s about letting women and LGBTQ members know that there’s very little, if anything, that they can do to protect themselves and defend their right to get from one place to the next safely without a man having something to say about it.

OK, I did not expect a BuzzFeed video to explore this notion of power and control in depth, but I at least expected some comments to expose just how gross catcalls can be.

But only two comments had the same ring of objectification that men’s comments have: “is that bulge real?” and “does the beard match the carpet?”

Every other comment actually seems to be stereotyping women.

“Oo, boy, whatchu got under that shirt, sweetie? Bet it’s a good heart?”

“I bet you can handle a girl with all kinds of emotions.”

These comments aren’t exactly flipping the script on men and showing them how terrible and objectifying catcalls can be. In fact, these catcalls rely on stereotypes about women wanting masculine men who can give them families and a listening ear for all of their emotions. Yes, these are so-called “good” stereotypes, but they’re still generalizations that limit women to all just wanting the same thing.