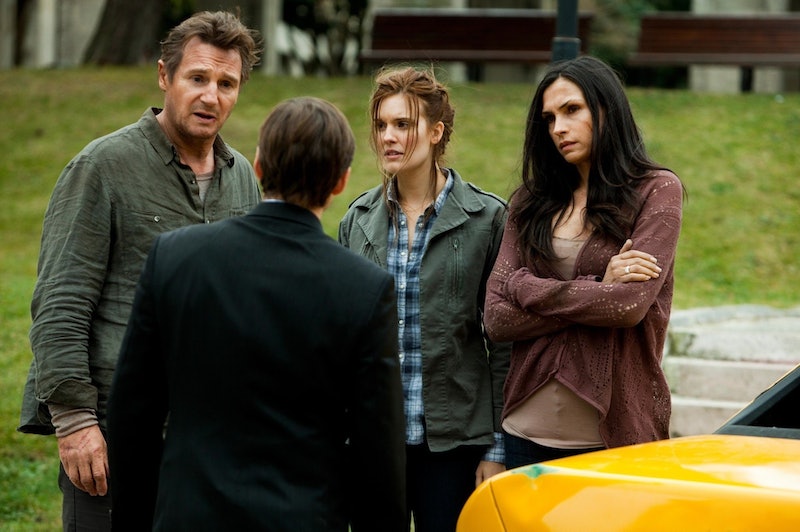 Though I'm sure many of you have been in disbelief about a third Taken movie happening for quite some time — I know I have been — here is undeniable, unavoidable proof of its existence: Taken 3 is happening, and the first trailer is here. Why? I honestly have no clue, apart from the studio and the actors really wanting to milk this cash cow for as many dollars (or should I say euros, since this is technically a French production?) as they can before the idea is really tired, or Liam Neeson doesn't look threatening enough to kick everyone's ass anymore. But all you need to know is that it's happening, the title is stylized as Tak3n, there's already a poster, and its going to be released on Jan. 9, 2015.

While it's hard to deny that Taken and Taken 2 were both supremely enjoyable, popcorn-type movies, it did however beg the question of how many times can the Mills family experience being taken before they just give up and move to a private island with Kimye-level security. Like, seriously, during the first movie Bryan Mills' daughter Kim (Maggie Grace) is taken, and in the second, his ex-wife Lenore (Famke Janssen) is taken. After all that, personally, I don't think I'd want to travel anymore.

Anyway, if you're hoping for this movie to answer that question, bad news — judging by the trailer, it doesn't, because no one's actually taken this time! Which, you know, is great news. Of course, it comes along with the fact that Lenore is brutally murdered just as she and Bryan are reconciling and then Bryan is accused of the murder and ends up with the LAPD, FBI, CIA, and other special forces hunting him down as well as the bad guys who really did kill Lenore, but, you know...yay, no kidnapping.

Despite the fact that this sequel was not necessary, I can't even lie to myself: I'm gonna see it anyway. Here's the trailer: