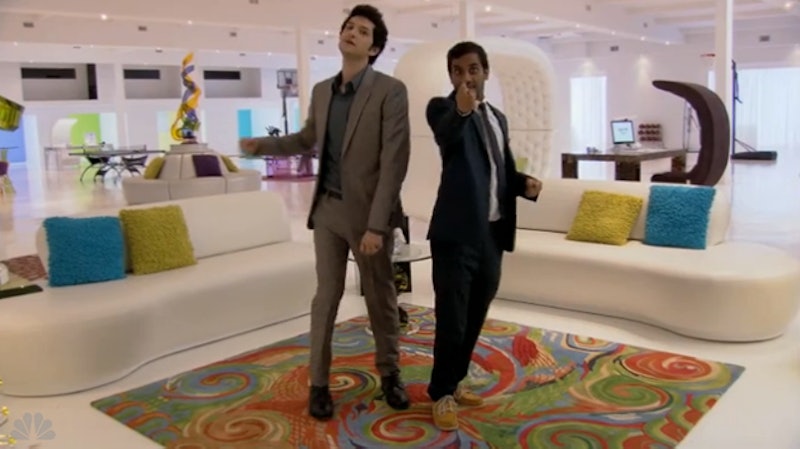 It's great to see that Tom Haverford's new business idea, Tom's Bistro, is going to be doing well when Parks and Recreation season 7 finally premieres sometime early next year. But, it's also hard to deny that when Tom's business ideas are at their worst, the show's subplots are at their best: After all, who can forget his idea for a baby tuxedo clothing line? Or what about Disco Dairy, which is literally butter with glitter in it? Gold! Now that Tom's actually going to be a success, though, it's imperative that we look back at his worst business idea of all in its amazing glory and awfulness: Entertainment 720, the media conglomerate company he founded with his BFF Jean-Ralphio during season 3 of the series.

Oh yeah. Literally everything was wrong with Entertainment 720.

Though a flashy idea in theory (and one of the show's best subplots ever), Entertainment 720 never had a real business statement other than to put on parties that they lost more money on than they made. Even the website for the company (which NBC has thankfully kept live even though the subplot is long over) doesn't give a clear mission statement, except, "helmed by nightclub impresarios and marketing masterminds Tom Haverford and Jean-Ralphio Saperstein, Entertainment 720 is your one-stop-shop for public relations, marketing, or anything having to do with reaching out to people, communicating effectively, and other desirable abilities."

Tom's Bistro may be a success, but this is arguably only because Tom has learned from the various mistakes made with Entertainment 720 and budgeting. These were, but were not limited to:

Hiring female employees just because they're attractive, and paying them $100,000 plus full medical to do nothing all day but sit around the office

Including a make-out room in their offices

Buying this chair with a roof on it

And giving away free iPads when iPads were still pretty expensive

Understandably, they went bankrupt. But hey...at least they had swag, right?