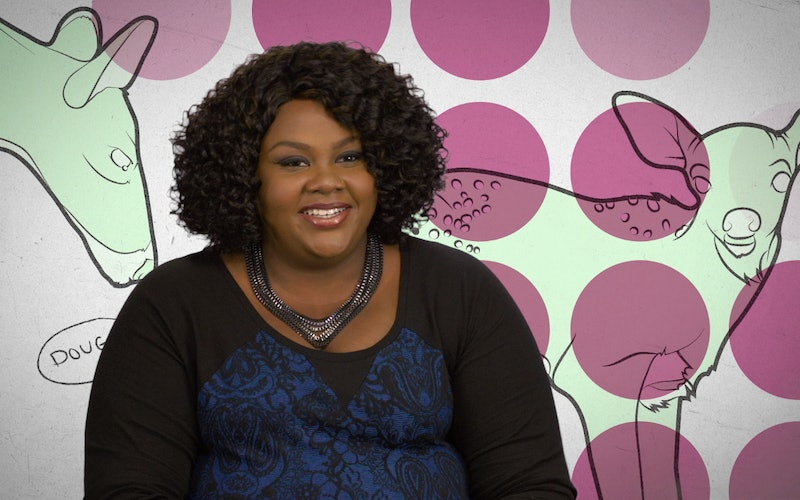 The whole cast is amazing, but one of the funniest women on Girl Code is the UCB's Nicole Byer. She has an ability to be as blunt as possible while still managing to work something clever into what she's saying. She feels like a cross between your wise older sister who's been through it all, your twin sister who knows exactly what you're thinking at any given moment, and your younger sister who's not afraid to get silly and weird and does everything you'd be embarrassed to but secretly want to do, like wear bright purple lipstick. After watching even a single episode of Girl Code, how could you not fall in love with Byer?

She performs live, she's in sketches, she Tweets tons of free jokes and all of the countrywide venues where she performs, and she's seemingly friends with the entire cast and writing staff of SNL, so hopefully it's only a matter of time before she gets even more gigs beyond Girl Code. Like, shouldn't this girl be on Broad City immediately?

Zamata, Byer, and Keisha Dollar performed for a long time at the Upright Citizens Brigade Theaters in New York as improv group "Doppleganger." As three of the few successful black women in the improv/sketch community, they made a group where they were never tokenized. Zamata and Byer also co-created a web series called "The Pursuit of Sexiness," which is incredible and should be binge-watched immediately.

She Was Ursula for Above Average

Above Average is "the online comedy network" from Broadway Video, Lorne Michaels' production company. Byer stars in one installment of a new series about Disney villains trying to get into heaven and she takes on the purple Disney villainess in style.

She Compiles Everything You Need to Know on Her Tumblr

Net Neutrality, Ferguson, racism, privilege, Nicki Minaj — she reposts it all on the Nicole Byer Tumblr. She'll keep you updated on not just the funny stuff, but also the important stuff. And she has excellent taste in hip hop GIFs.

She's Got More Than One Gig at MTV

Byer appeared in a promotion for The Interview and the VMAs called Dave Skylark's Very Special VMA Special, along with a couple other UCB performers.

She Had a Commercial In Israel

Like a lot of UCB performers, Byer was booked for a commercial overseas. And while it's great that she was able to find some work, it did make me think of when...

...She Called Out Racism In The UCB Video Below

Byer and Zamata co-wrote this sketch about auditioning and being asked to turn up the "blackness." It's one of the funniest performances Byer's ever done, because she's not afraid to be honest while still being hilarious. It's exactly what makes her so amazing on Girl Code. And I know Season 3 will not disappoint, because in MTV's Girl Code trailer I caught a hint of her amazing Oprah impression. That new episode cannot come fast enough.