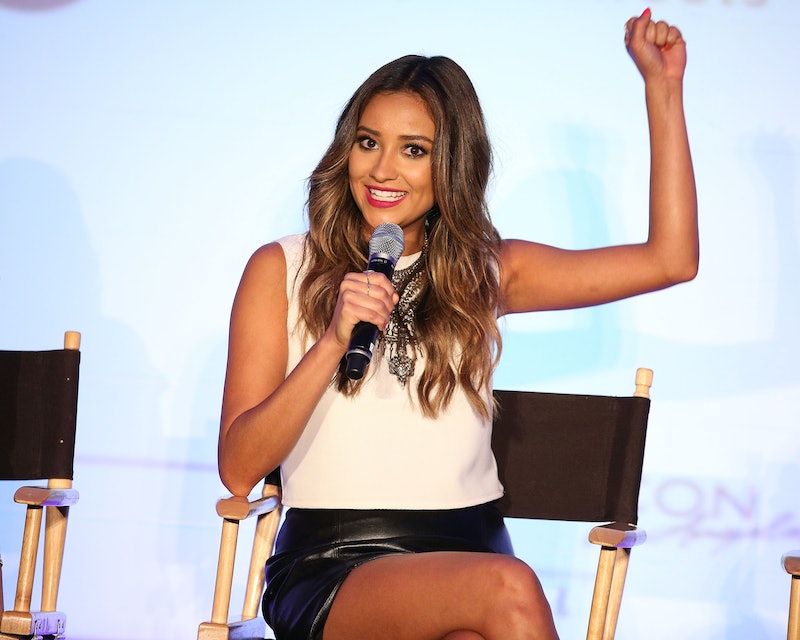 A Pretty Little Liar has split up with her boyfriend! This is not a drill. According to Us Weekly, Shay Mitchell and Ryan Silverstein have broken up after much fighting throughout their relationship. #bummer. Mitchell's now ex-boyfriend, who is BFFs with Drake — and works as his assistant... — is totally old news — according to an Us Weekly source — as Mitchell was seen hitting it off with a male model, Gui Fedrizzi, after doing a photo shoot together (don't worry, there's a photo of him coming). So it seems like she's all single and ready to mingle, right?

Damn right! Mitchell is loving single life, according to Us Weekly. "She's definitely having fun," the source says. You know what Cyndi Lauper said, "Girls, they just wanna have fun", right? Well according to her Instagram, Mitchell is handling the split like a complete pro, I'd even go as far to say that she is #winning single life, doing all the things a single girl should do after breaking up with her boyfriend. Food. Alcohol. Friends. You know, the essentials. Check out how Mitchell has been handling the breakup, brought to you by her extremely perfect Instagram feed (she gives LC a run for her money).

I think we all passed out when we saw this picture, right? A pizza... cake. Real life. And Mitchell, who posted the picture on Instagram deserves as many helpings as she wants.

Mitchell shared this perfect cocktail, which is featured on her lifestyle website. Enjoy, girlfriend.

What better way to work through a break up than with "channeling your inner Destiny's Child?" Plus, if Mitchell ever finds herself in a dance battle, she'll be prepared.

Another must during a split? Having one of your friends, or as Mitchell captioned it, "double trouble," to help you through.

Male models never hurt during a break up, too. Gui Fedrizzi, the one who Mitchell supposedly "left" with at the end of the photo shoot, is the one in the middle with the eight pack (how are there eight?!).

What would a break up be if it didn't involve at least one inspirational quote?

The final thing a girl needs during a break up... Queen Bey.