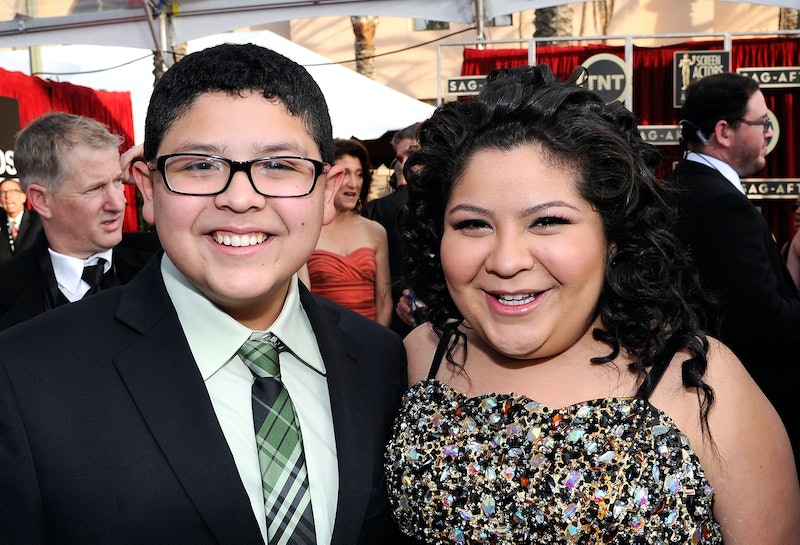 One of the first breakout stars of Modern Family was Rico Rodriguez, playing Manny Delgado, Gloria's young son who clashed with Jay because he was so outrageously mature beyond his years. In real life, Rico isn't much like Manny, but, like all the kids on Modern Family, he's surprisingly self-possessed for a teenager. He's been working for almost ten years, alongside his older sister who's also an actor, Raini Rodriguez of Disney Channel's Austin & Ally . Raini, or as she calls herself in her Twitter bio, "that girl who looks 12 but is actually 21," moved out to LA with her mom and Rico when she was 11 so they could pursue acting. And while it took a while for them to find success, now, both have recurring roles on sitcoms.

On Austin & Ally, a sitcom about high school singers and songwriters trying to make their way in the music industry, Raini plays Trish, Ally's best friend and both Austin and Ally's manager. Just like Rico, Raini has a natural comic timing that easily makes Trish one of the best characters on her show. Before getting the role of Trish, Raini did some small parts on other Disney shows like The Suite Life of Zack and Cody and played Kevin James' daughter in Paul Blart: Mall Cop.

Because Raini's a quite a few years older than her target audience, she's able to talk eloquently about topics that speak to them, like bullying, from the perspective of someone who's gone through being a teenager and managed to become successful. She recently wrote a guest blog for Huffington Post called "Choose Kindness" targeted at Austin & Ally fans encouraging them to speak up and out about bullying after one recent episode had Trish become a cyberbullying target.

She also enthusiastically live tweets episodes and shares pictures from the A&A set, where it seems like the whole cast loves working together.

Because they're young siblings who both work for the Disney Corporation, Raini and Rico do a lot of interviews and red carpets together. Both Raini and her brother are hoping to branch out and keep working as they get older. Raini's talked about wanting to become a director, and they've also said they work on writing ideas for screenplays or television together.

Also in that video, they talk about their love of charity — their Raini & Rico Foundation supports the government's Head Start program, which helps young children from poor families get early education. Their foundation specifically targets the area in Texas where they grew up, which despite federal assistance, has limited funding to update books or get more supplies. These siblings have just as much passion for helping others as they do for making us laugh on the new seasons of Austin & Ally and Modern Family.