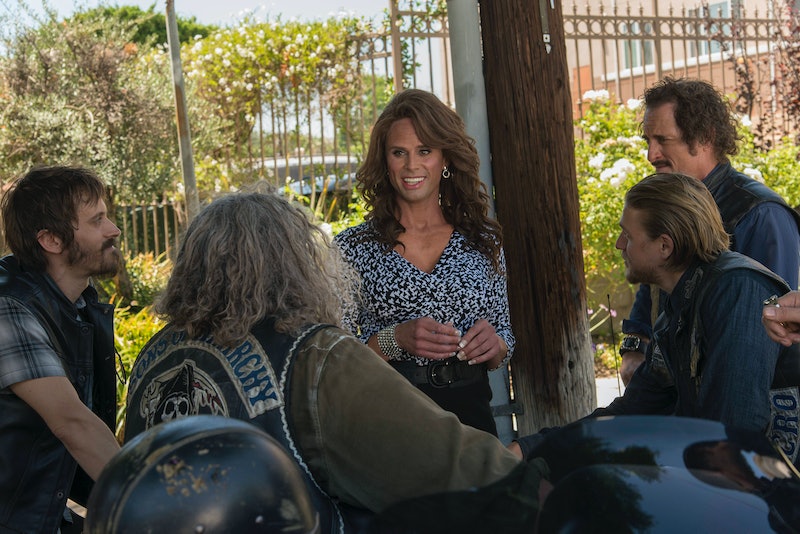 This isn't the first time we've encountered Walton Goggins' transgender Sons of Anarchy character, but it is the first time she was given a decent couple of scenes and a real story to work with. Professional escort Venus Van Damme showed up for the first time back in 2012, when Goggins gave a somewhat problematic interview with EW (mostly in the language he chose) about the new character. Ultimately, his heart was in the right place, asking SOA showrunner Kurt Sutter to create a transgender character who felt like a real person and a woman he said he'd want to hang out with — essentially, someone who took rather lacking portrayals of trans women in pop culture and showed them their wrongs.

Goggins' first outing didn't exactly raise the bar as much as I would have liked (after all, Sutter still isn't giving the role to a trans woman, but rather casting yet another man in a trans role). But in Tuesday's episode "Poor Little Lambs," Sutter and Co. proved that not only do they care about the representation of all women, but they are making an effort to understand those representations as well. And it was a big improvement from the first appearance of Venus Van Damme:

After a drug deal gone awry, Tig (Kim Coates) is brutally injured, causing Venus to rush to his side. Earlier in the episode, he chastised Bobby for making a transphobic joke about Venus ("Don't be disrespectful," Tig barked in her defense) after Tig suggested that he and Venus have a more than friendly relationship. It's to be expected that some of the club members would react poorly to Tig's affection for Venus; they are all assholes, after all. (Remember when Tig seemed to have a little crush on her upon their first meeting back in 2012? Juice — of all people — snarked "Really?" rather rudely after Venus told Tig, "Not gonna happen, Tiger.")

But once Tig is laid out, Venus comes to him and vows to take care of him, rubbing his chest affectionately as Tig looks on in gratitude. Eventually, he asks her where she came from, before caressing her face and giving her a passionate kiss. Here's what Venus had to say (and keep in mind, she's someone whose speech is prone to spiritual overtures):

Well, my sweet Alex, I was born a man, but I believe my true genesis happened a bit later when I was stirred by the gods of love and beauty and transformed into an angel whose sole purpose is to bring light to the shadows and a little bit of joy to all those lost souls who can no longer find it.

It's at that point that Tig looks into her eyes deeply, in a way we've never noticed Tig's eyes light up, and the two share one of the most tender kisses this show has ever seen. (If the rest of the episode is any indication, it may be one of the last tender moments left on SOA.)

And while this scene is a huge improvement for representations of trans women in media and a lovely moment for both Tig and Venus, it still manages to avoid the language the trans community generally uses. "I was born a man," in most cases, would be better spoken as "I was assigned male gender at birth," though not all transgender people agree with that phrasing.

Still, however imperfect, it is encouraging to see a series that can skew so bro-heavy (even with all the fantastic women in its cast of characters) deliver a trans woman character with a real storyline instead of using her as a prop. It's a seemingly small moment, but it's an important one.