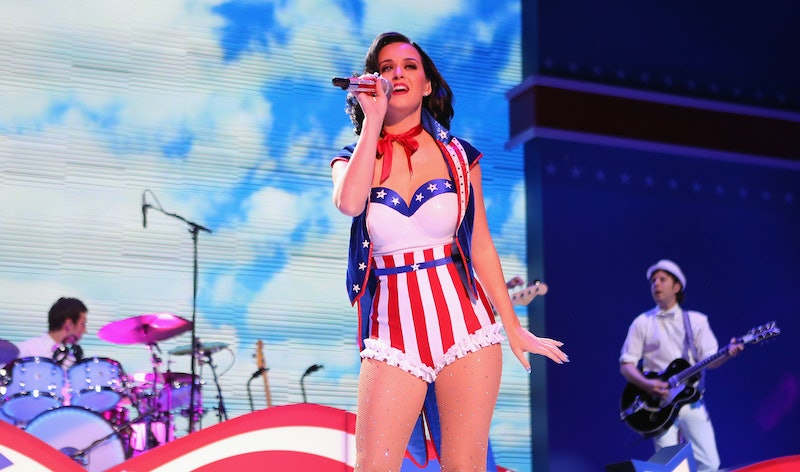 Last Friday night, we went streaking in the park, skinny dipping in the dark, then ha— Sorry. I can’t help but launch into those lyrics whenever I say “last Friday night.” Allow me to try again: Last Friday night, Katy Perry went to a Diplo show in Las Vegas. While clubbing it up at Surrender Nightclub, she didn't just fuel rumors about her maybe-relationship with Diplo. Perry had pizzas delivered to the VIP section. WHAT A DREAM.

Nightclubs aren't exactly my bag, but pizza is my bag. As is FanFiction. And whenever I read a story about a celeb doing something hilarious/awesome like, say, throw an impromptu pizza party in the VIP section of a Vegas nightclub, my imagination goes nuts. What would it be like to be a part of it?

I could not stop myself before I spun the following totally fictional yarn about being a part of Perry's pizza posse:

A FanFic About Clubbing & Eating Pizza With Katy Perry

I bumped into Katy Perry at the Wynn. I tried my hardest to maintain my composure as we chatted. After a brief conversation about my nail polish, she asked me to join her in the VIP section of Surrender. I had no idea that that sort of thing could happen in real life, so I seized the moment. That might've been my one and only opportunity, you know? I didn't know anyone else in the group, but that didn't matter: Katy made me feel like I belonged.

“Ugh, I'm hungry. I wish this place had ‘za,” one guy in our group (I think his name was Teddy?) said. Katy whipped around with the speed of a bullet train. She stared him directly in the eye.

“If I ordered pizza, would you eat it?” Katy asked. Her tone was stern. She was not messing around. The guy nodded, eyes darting at the others in our group. The rest of us began to nod.

“OK. I’m going to take a headcount.” Katy began pointing and silently counting. But then, she suddenly stopped. “Wait, should I order pizza for everyone in the club?”

“That’d be a hot mess,” one woman (her name was either Sharon or Sara-Ann) responded. “Like, you don’t want everyone in this club hovering around our roped-off section. Do you really want to be in charge of doling out slices to strangers?”

“Fair point,” Katy replied. “But I’d feel terrible leaving people out. I could just tell the delivery guy to distribute the pizza boxes around the room. It could— Never mind. You guys are right. I’m making this a thing. Let’s keep it simple.” Katy starts the count over.

“I can take orders,” another man (never caught his name) volunteered. “Like, I could ask who wants cheese, pepperoni, or vegetarian.”

Katy considered this for a moment. “What if we went the personal pan pizza route?” Katy beamed. “Everyone gets the exact type of pizza they want!”

No one responded to this suggestion. Katy immediately detected that we weren't feeling the personal pan pizza option. A panic washed over her face. It was becoming abundantly clear that Katy just wanted everybody to be happy. She put her phone back in her purse.

“Maybe this was a dumb idea,” Katy said to no one in particular. She stared at the ground for a moment, and then looked back up at Diplo spinning on the stage. The rest of us exchanged “I feel awful for dashing her pizza dream” glances. But before we could figure something out, Katy reached for her phone.

“F it. I’m just going to order a bunch of pizzas. If you don’t like them, you don’t have to eat any. But really, who doesn’t like pizza?” Katy smiled as she punched in the number for Napoli Pizza. The mood of the VIP section instantly shifted.

“Hi, I’d like to place an order for delivery. We’re at the Wynn. Will you bring the ‘zas to Surrender? Or should I send people out to the curb? Uh huh… Uh huh… Cash. Yep. Um… I don’t know, just send enough cheese and pepperoni pies for the VIP section. Yeah, that sounds like a perfect number. 30 minutes? You’re an angel.”

Katy hung up the phone and shrugged. “Get your eating shoes on, because mama has a truckload of pizzas heading our way.”

27 minutes later, the pizza boxes were being passed around the VIP section. As Katy grabbed a slice of pepperoni, she looked around the booth. Her brow furrowed.

"Did we get napkins or plates? Shoot." She excused herself from the VIP section and approached a bartender. I couldn't hear what she said, but when she turned around, she was holding a large stack of cocktail napkins.

"Designers, make it work," she said as she handed out the small paper squares. "You have one day to construct a dress for Heidi to wear on the red carpet out of cocktail napkins. And don't forget: The bigger the slit, the better!" We laughed. Her Tim Gunn impression was an absolute hit.

After I finished two slices of cheese pizza, I felt that it was my time to go. I didn't want to overstay my welcome. I thanked Katy for a fun night, excused myself from the VIP section, and went back to my hotel room. When I opened the door to my room, a thought hit me like a pizza box made of concrete: I didn't take any pictures. No one would ever believe me.

As I brushed my teeth over the hotel sink, I noticed a pizza grease stain on my blouse.

"I will never wash this blouse," I said. "For this pizza stain is a souvenir."

I finished getting ready for bed and went to sleep. That night, I dreamt about a pizza-themed parody of Katy Perry's "Waking Up In Vegas." Sadly, I forgot all of the lyrics when I woke up.

But at least I still have that pizza-stained blouse.