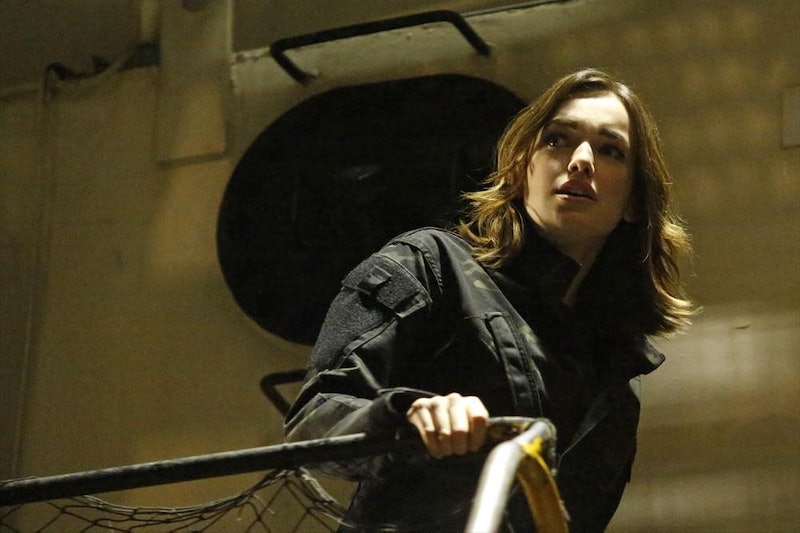 According to the dramatic, suspense-filled preview for next week's Agents of S.H.I.E.L.D. , Simmons is back! The real Simmons, not the depressing Phantom Simmons that Fitz has been talking to in his lab. Yay! She's got a sassy new haircut. She's slinging a gun like a pro. Oh also, she's sporting a Hydra jacket — wait what?! Simmons as a Hydra agent? No! It's not that bad! Fitz is gonna be OK, I promise! This is not worth going over to the dark side. As Raina put it, that's "so 1945." Yet in the teaser, we see our beloved biologist Jemma Simmons assuring someone that she's "well aware" of who she works for and even points a gun at Director Coulson. "Did you think I wouldn't find out?" he asks. Hydra is recruiting and they've got their eye on Simmons. Earlier in this week's episode, Skye voiced her resentment about Simmons abandoning the team. They are certainly setting us up to believe that the spunky scientist betrayed them.

It was hard enough to lose Ward, though a villain scruff does look pretty good on him. Don't tell me we have to go through this with Simmons too. Do you remember how Fitz broke down when he found out Ward was Hydra? That boy is in a fragile enough state as it is, bless his heart. I can't imagine what would happen if he discovered his best friend had been lying to him as well. Not even the cool new engineer "Mac" could bring him out of that emotional distress.

The official ABC press release for next week's episode, title "Making Friends and Influencing People," describes Simmons as "caught in the crossfire." That doesn't indicate that she's gone baddie on us, does it? I'm all for female villains, just not Jemma Simmons, please. It sounds more like she's being manipulated, mixed up, or even working undercover in Hydra. In the "T.R.A.C.K.S." episode from last season, Simmons got very into her undercover role as Coulson's daughter. It was funny that time. Perhaps we're seeing that enthusiasm for theatrics shine through once again.

The preview also shows the return of ABC's favorite tween, Dylan Minnette, as Donnie "Blizzard" Gill. Seriously, that kid was on Scandal and Lost. He'll be on Once Upon a Time next, mark my words. We also saw Reed Diamond's creepy Nazi character doing some Clockwork Orange style interrogation on a mystery recruit. This season has been off to a really nice, roller coaster-y start. Looks like we're in for another fun ride next week.