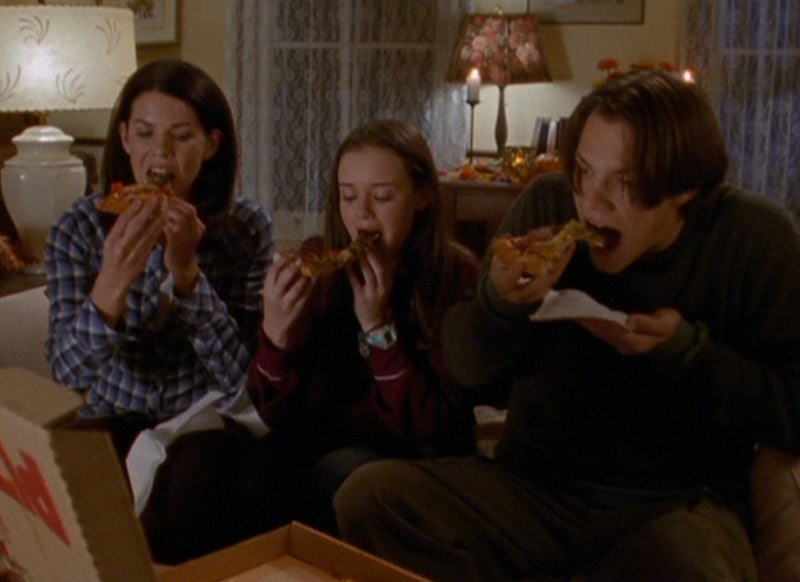 You guys be honest. By the end of the series run of Gilmore Girls, how many people actually believed Dean was the best boyfriend Rory had ever had? How many people believed she could do no better? That first question is probably much more debatable than the latter since both Gilmore women were amazing and could get literally anyone they wanted in the entire world (Luke and Lorelai forever). I'm not the biggest fan of Rory's first serious boyfriend but I do have to be honest, the start of their relationship was so real in its awkward and endearing sweetness. Dean's directness with Rory was refreshing to see, considering he was a teenage boy who was new to Stars Hollow. He was honest that he'd noticed her reading in school and he was obvious with his affections for her. And Dean and Rory's first kiss was painfully sweet with the just right hint of corny for their age.

In Season 1, Episode 7 "Kiss and Tell," Rory goes to Doose's Market to pick up a few things and obviously to see Dean. When Dean offers to give Rory a free soda if she plays a game. The kiss happens. And Rory's reaction to it is perfect.

So what happened to make Dean so unlikable to so many despite such great beginnings? From Dean and Rory's differing paths to his strong personality and the not-so-appropriate way they got back together, many factors led to Dean's demise in the eyes of many fans, including myself.

Dean built Rory a car. He approached Rory and noticed her before she even knew who he was. In Dean's eyes, it seemed as though he was always more invested in Rory than she was of him. Remember how upset he was with her for not saying I love you right after he did? She needed some time and he didn't understand that. He pushed her because he wanted her to care for him as much as he thought he cared for her which she did. But he didn't see it that way.

2. Dean Was Jealous And Possessive

From getting angry when she couldn't hang out with him to getting jealous over every small thing, Dean was so overprotective and possessive of Rory. To be fair, he had a reason to be jealous when Jess showed up in town, but when Jess and Rory first met, she didn't automatically have the notion of falling for him and leaving Dean behind in the dust. He saw it that way and he berated her for it even as she fought to stay together and her growing feelings for Jess. When he finally ended their relationship in Season 5, he did it by saying Rory was leaving him behind and basically implied she wasn't invested in their future. He then ditched her at her own party in front of all of her new friends.

Dean and Rory should not have gotten back together. I'm sorry to say it and you can all yell at me on social media, but it was a terrible choice on Rory's part as she is the most logical person in that relationship. She knew that she loved Dean and sure, people do crazy things when they're in love. But that doesn't mean she needed to ruin a marriage before it was going to end, according to Dean. Dean ruined Lindsay by cheating on her, no matter how terrible they were for each other they were married. And because Dean wasn't willing to wait to be with Rory until after everything was settled, I believe that started the second half of their relationship in a bad place.

More like this
Emma Thompson, Lashana Lynch, & Stephen Graham Lead Netflix’s 'Matilda'
By Sophie McEvoy
15 Intriguing Movies On Netflix That Are Based On True Events
By Mary Kate McGrath, Shannon Barbour and Grace Wehniainen
Everything We Know About When To Expect Money Heist: Korea Part 2
By Kadin Burnett
Viktor Hargreeves’ Coming Out Scenes Are The Sweetest Part Of Umbrella Academy Season 3
By Gretchen Smail
Get Even More From Bustle — Sign Up For The Newsletter