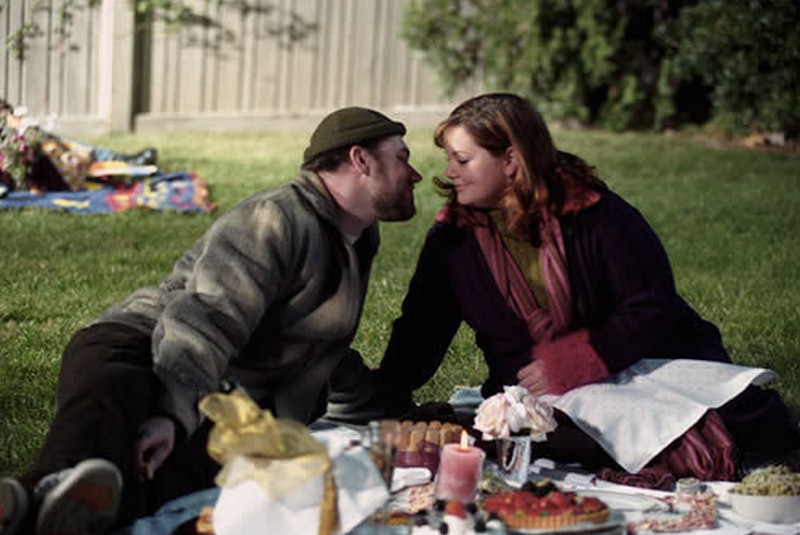 When you think of the Season 4 episode of Gilmore Girls titled "Luke Can See Her Face," people usually think of one major plot point: Luke FINALLY starts getting his act together to try and win over Lorelai thanks to a good, old fashioned self-help tape. It's an amazing moment to be sure, and it's one fans had been hoping to see since Luke first graced us with his surly expression, backwards baseball cap, and witty repartee with Lorelai (which obviously proved he's always been in love with her), but that's not the plot point I think of when it comes to that iconic episode in the Gilmore Girls canon. No sir. I like to fondly remember the B-plot of that episode which features Sookie, Jackson, and the rest of our favorite characters… and zucchinis. Yup that's right: We're talking about the Gilmore Girls zucchini episode.

The episode is all about Lorelai and Sookie's dream becoming a reality: They are finally opening their own inn, The Dragonfly. Obviously, they are both completely stressed about ensuring that the opening is a success. Lorelai takes charge, as per usual, and also as per usual, Sookie goes a little crazy about making the perfect meals for the opening. She decides on zucchini soup but there might be an issue with getting the vegetable ripe and ready in time. So Jackson tries to make sure her wife is satisfied by literally sleeping with the zucchinis to ensure their perfection, as expressed in this perfect "Who's on First: Zucchini Edition" sketch:

This classic bit of Gilmore comedy isn't the first time Jackson went to unbelievable lengths for his wife (and for food). Obviously, Jackson and Sookie met through vegetables as Jackson was Sookie's vegetable supplier before they fell in love through that unique and adorable shared interest. But there were moments where Jackson's love of food and his wife went above and beyond:

Jackson gets a deep frier and deep fries a turkey, leading to one delicious bird and people drunkenly trying to deep fry other edible and non-edible things. Naturally, Sookie is not pleased.

When Sookie is put on bedrest during her pregnancy, Luke takes over as her substitute chef at the Dragonfly. Naturally, Sookie doesn't like someone taking over her turf, and has had tiffs with Luke about this very problem in the past. So she first tries to stay in a room at the Dragonfly and have her sous chefs and waiters bring her tasting spoons from all of Luke's meals.

But then, the magic happens: Luke yells at Sookie for undermining him and upsets her so much, that protective Jackson swoops in and defends his hover-chef of a wife.

3. And then there was that time this happened:

And it was everything.