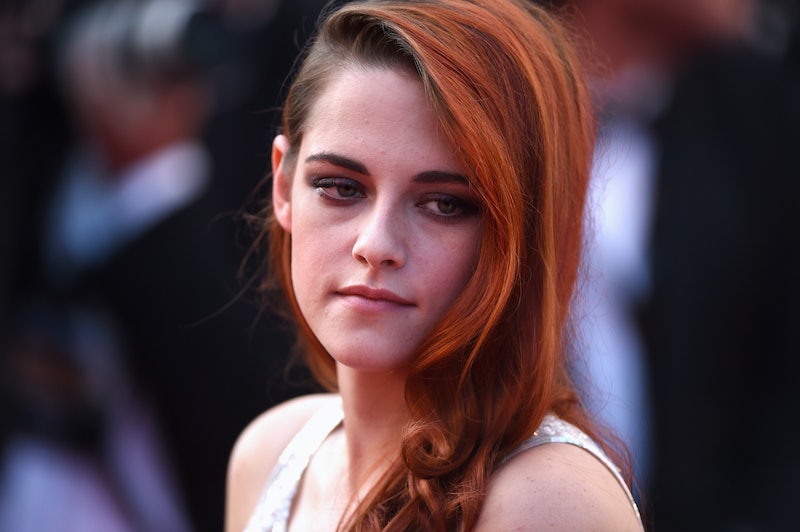 I'm going to be completely upfront about a secret I've been keeping since I realized one out of every five people that I know was probably a Twihard: I didn't like Twilight. I'm one of those people who could find about five anti-feminist moments in the work without even trying. I didn't even finish reading Breaking Dawn. Now that I've gotten that off my chest, I'm fully prepared to eat my words. Stephenie Meyer has returned with a new Twilight project and it's a complete turn around from the books I remember reading in which a girl was totally okay with her boyfriend disabling her car to keep her from going to see her friends. Apparently, Meyer has partnered with Facebook to air short Twilight films that will be made exclusively by female filmmakers and her reasons are perfect.

"The female voice is something that has become more and more important to me as I've worked in the film industry," Meyer said, according to The Hollywood Reporter. "I'm honored to be working with Women In Film, Lionsgate and Facebook on a project dedicated to giving more women a chance to be heard creatively." And there's no denying that Meyer has a point. According to Women Make Movies, females made up 16% of all directors, executive producers, producers, writers, cinematographers, and editors in 2013, which was actually a decrease in the percentage from 2012. A 2% decrease in the percentage. With female filmmakers being overwhelmingly drowned out by the 84% of directors, executive producers, producers, writers, cinematographers, and editors who are male, the fact that Meyer wants to use this project to give females in film a voice is truly commendable.

The contest will be called "The Storytellers — New Creative Voices of The Twilight Saga" and at the end of its many phases five female filmmakers will be selected to work with Lionsgate, Facebook, Meyer, and Women in Film to helm the Twilight shorts. The filmmakers will be chosen by a panel of celebrities such as Kristen Stewart, Kate Winslet, and Octavia Spencer and executives such as Frozen's Jennifer Lee, Modern Family's Julie Bowen, Twilight's Catherine Hardwicke, and Women in Film's Cathy Shulman. Fans of Twilight will then get to help judge the best short.

"The Storytellers" is an opportunity in more ways than one. After all, most of the anti-feminist arguments leveled against Twilight surround the main character, Bella Swan, whose only defensible trait is that it is her "choice" to let Edward Cullen make all of her decisions for her. "The Storytellers" opens up the Twilight universe to the perspective of the characters outside of the Edward-Bella-Jacob love triangle, characters that, quite frankly, even many fans found more intriguing or interesting than the main ones. Imagine delving into Alice Cullen's background as a psychiatric patient before meeting Jasper Hale. Imagine exploring the relationship between Leah Clearwater and Sam Uley before imprinting ruined them forever. Imagine just hanging out with the Denali Coven for a day.

Basically, the Twilight universe has a rich tapestry of stories that Meyer missed the opportunity to explore because she considered herself a better writer of romance than she was of action. These short Twilight films will re-engage fans of the series, but they also have the opportunity to pull in new fans who would be interesting in watching stories that address the issues that they had with the original series. But even if it doesn't, just the fact that something like this exists to give a spotlight to female filmmakers and help them break into a history that, statistically, is very unkind to them is a magical moment.

Of course, Team Edward or Team Jacob fans who envisioned a different ending for either of the boys — like, you know, Edward not having to bite his newborn baby out of Bella's body or Jacob not immediately falling in love with said newborn baby — will probably be out of luck. "The Storytellers" sounds like a project meant to expand Twilight canon rather than make additions to it. After all, Meyer's response to Midnight Sun being leaked on the Internet, a book that would have told the story of Twilight from Edward's point of view, was to discontinue the project indefinitely because her distraught mood would have caused her to change the ending. I doubt the storytellers get to become the story-rewriters, even if Breaking Dawn caused a severe split of opinion between Twilight fans like no book in the series that came before it ever did.

More like this
Letitia Wright's Aisha Encourages A Vital Conversation Around Immigration
By Maxine Harrison
Idris Elba & Tom Hollander Lead This Year’s Must-Watch Christmas Flick
By Maxine Harrison
The 'Lady Chatterley's Lover' Book Leaves Us With A Troubling Question
By Catharina Cheung
The 'Firefly Lane' Book Ending Teases Way More Tears To Come In 2023
By K.W. Colyard
Get Even More From Bustle — Sign Up For The Newsletter