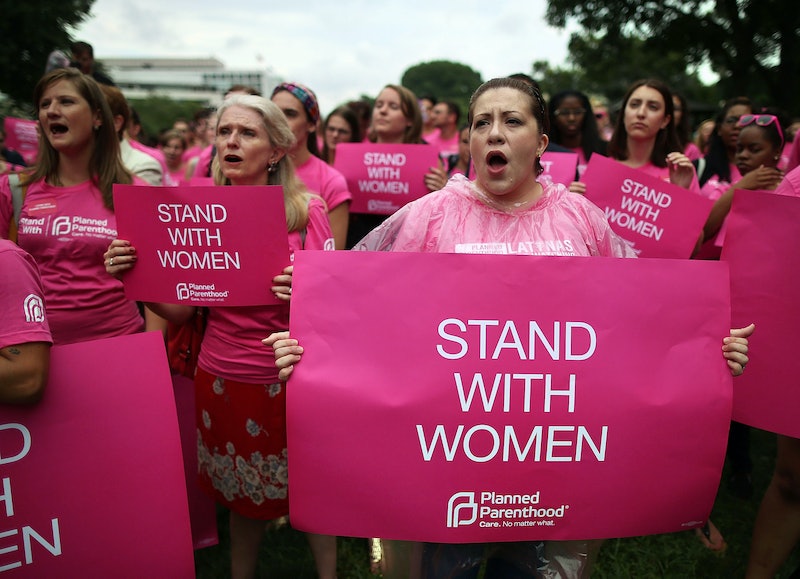 We chat about our sex lives all of the time, but how often do we think about how crucial it is to have access to birth control and abortion? For Katha Pollitt, longtime columnist for The Nation and pro-choice activist, talking about sex is talking about reproductive freedom.

Pollitt’s new book PRO: Reclaiming Abortion Rights (Picador) is an explanation of why keeping abortion legal is so critical to women’s lives. Her argument is elegant, pointed, and smart. Unlike most of the writing and rhetoric around abortion — It's evil! It's our right!— she eschews hyperbole and easy conclusions. From her opening anecdote about her mother's abortion (a longtime family secret), she uses the personal not only to leapfrog into the thorny politics of pro-choice but to examine how America perceives women's sexuality and how those perceptions govern our attitudes about birth control, motherhood, and the legal right to choose to end a pregnancy.

I sipped iced tea with Pollitt, the poet, columnist, and longtime activist, as we chatted about her book's nuanced philosophical pro-choice argument, why we need to put women back at the center of abortion politics, and Justin Bieber (long tangent). I learned a lot — both from Pollitt and her text — and here's the most important stuff you should know:

Abortion has touched someone you know

"I think many more people know someone who has had an abortion that they don’t know has had an abortion because of the secrecy around it," Pollitt said. "Once abortion is legal, it changes the nature of pregnancy and childbirth and a whole lot of other decisions."

Pollitt is emphatic about how crucial the choice is in pro-choice, i.e. every woman should be choosing whether or not to have a baby every time she gets pregnant. "Having a baby is no longer fate in the same way. It’s fate if you can’t get to a clinic — which is more and more the reality — but if you can you really are making the decision to have a baby. Even if you think you’d never have an abortion, you could. And a lot of people who think they’d never have an abortion do."

The book hammers home this point, with stories from women who were raised to think abortion was shameful or sinful, and then find themselves having the procedure with no adverse consequences.

Pollitt told me, "I think [legalizing abortion] changed in a very profound way what it means to be a woman. There is no way that women would be where they are today in terms of education, work, being able to have smaller families, being able to marry someone they actually like (as opposed to someone who got them pregnant after the prom). There’s no way that would have happened without legal abortion."

Pollitt's book stresses the advances American women have made since the Supreme Court's Roe decision in 1973. Fewer teen moms, smaller families, and choosing whether or not to have children open's up women's options. Pro-choice is more choice.

Abortion is not just a women’s issue or a cultural issue — it’s an economic, social, and human rights issue

Pollitt argues that legal abortion, and access to birth control, have been pushed aside by Americans who take these privileges for granted. Americans "ghettoize abortion as a women’s issue when it really is a social justice issue, and a very important economic issue. You have people who say, 'Abortion is just part of the culture wars," Pollitt said. "Culture wars are things [like] Do you like opera or do you like rock and roll? But abortion is a public health issue and and economic issue, too — because if women have to have a child every time a random sperm finds its way to the egg, then what kind of a life can you have?"

In Pro, Pollitt cites several studies that back up this assertion, proving that women's career advancement and education are both limited by the number of children she has.

"People who are against legal abortion talk about having a baby as if it’s nothing," she said. "They don’t acknowledge that having a baby is a major determinant of everything that happens in your life. It’s a before and after."

Most women who have abortions already have children, so they understand the decision they are making

"Sixty percent of people who have abortions are mothers already," Pollitt said, quoting a stat from the Guttmacher Institute. "Think of what that means for all of those laws about having sonograms. These women know what they are doing — it’s not as if they think it's a cantaloupe. They are treated as if they have no knowledge of what’s going on and haven’t given it any thought at all. That’s not very likely."

Keeping abortion legal is not only the best situation for women — it’s the best for kids, too

"Each baby comes into the world as a bundle of possibilities. Only some of them will get to live up to those possibilities." Others, like those who are born into poverty, do not have the same educational and material advantages. Abortion is a crucial way to make sure all babies are wanted, and their mothers are able to nurture and provide for them and help them to realize their potential. "Why as a society don’t we want to make sure that as many children, as many women, as many men get to be their full selves?"

Women should be at the center of this discussion, not babies

In the discussion around abortion, Pollitt says, "The fetus is now the star player. I don’t even like to say fetus because most abortions are actually of embryo. The woman has been ushered off the stage."

"The pro-choice argument tends to be made in a defensive way," she adds. Everyone is overly concerned with what Pollitt calls "the hard cases: rape, incest, pregnancies that are severe threats to the woman’s life. If you generously estimated what percent of abortions that would be, maybe it’s 10 percent." Women's lives are subsumed into what is best for the fetus — even though the fetus is not a person (as Pollitt cogently argues in the book). Americans are so uncomfortable with the idea of "abortion on demand" that they try to skirt the issues which the majority women have to consider when deciding about abortion, i.e. whether it is the right time for her to have a baby.

Pollitt is optimistic about the pro-choice movement, especially given the enthusiastic involvement of young women. "I think the under 30s are the best that we’ve seen in a long time. They are quite radical, quite outspoken, and very creative in their activism," Pollitt says. "You have people Tweeting their abortions and putting them on YouTube! It’s all in service of demystifying it. This thing that is supposed to be this near fatal operation that lasts forever and is excruciating painful—well, it isn’t."

More like this
24 History-Making Black Women You Probably Didn't Learn About In School
By Ayana Lage and JR Thorpe
25 Inspiring Quotes From Black Women To Celebrate Black History Month
By Kyli Rodriguez-Cayro and JR Thorpe
Watch Jacinda Arden’s Devastatingly Honest Resignation Speech
By Sam Ramsden
Here's How Netflix Should Adapt Prince Harry's Memoir Into A Movie
By Ginny Hogan
Get Even More From Bustle — Sign Up For The Newsletter
From hair trends to relationship advice, our daily newsletter has everything you need to sound like a person who’s on TikTok, even if you aren’t.